I know it's been quite a while, friends, but we finally have some new Game of Thrones footage to feast our eyes on: the official season eight teaser!

In it, Sansa, Arya, and Jon march through the crypts of Winterfell, passing statues of their late relatives, like Ned and Catelyn Stark. When they reach a far wall, though, the trio stumble upon something incredibly foreboding: statues of the three of them, hinting that their own deaths might not be that far off. Then a threatening wave of ice and frost creeps through the crypts, as Jon and Arya draw their swords. Talk about ominous.

But it's one small moment before the wave of cold hits our heroes that we're hung up on: the feather that falls to the ground after Jon walks by a certain statue. As you're likely already very much aware, every little thing on Game of Thrones is done with purpose, and this scene has a connection to none other than Lyanna Stark, Ned's sister and Jon's mother. 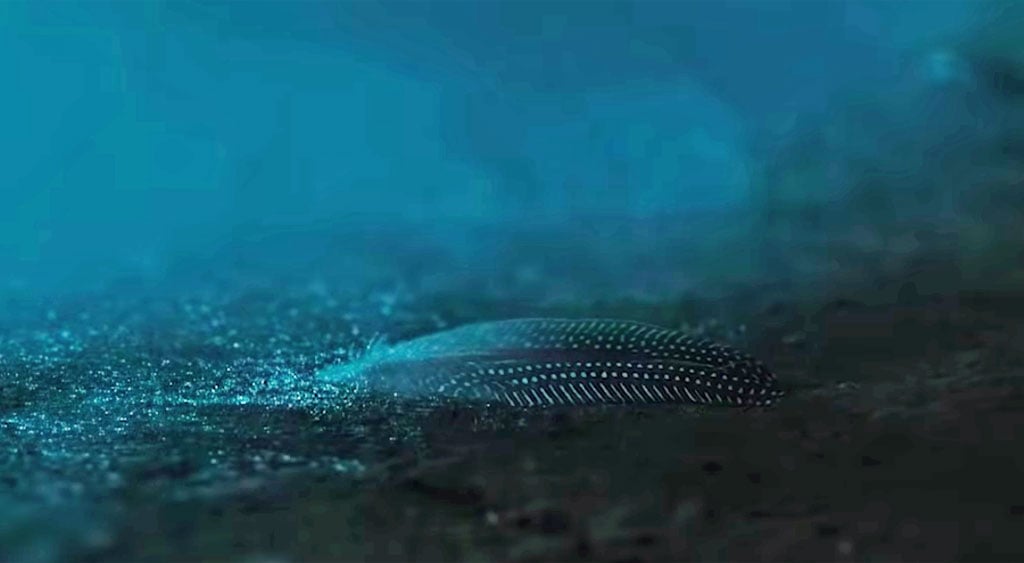 When Jon passes Lyanna's statue, the feather is blown out of her hands and drifts to the floor, while Lyanna's soft voice can be heard saying, "You must protect him." As we discover in season seven, those are the words that Lyanna whispers to Ned when she hands over her newborn son, just before she succumbs to wounds sustained during childbirth. Up until that point, everyone had been led to believe that Jon was the bastard son of Ned and a random, unknown woman, but in actuality, he was the son of Lyanna and Rhaegar Targaryen. In other words, he's a legitimate contender for the Iron Throne. But anyway, back to the feather!

In the very first episode of the HBO fantasy series, we see King Robert Baratheon — who was betrothed to Lyanna before she left him for Rhaegar — enter the Winterfell crypts and place a feather on Lyanna's grave. He tells Ned that he still has fantasies about killing Rhaegar, and when Ned tries to convince him that the entire Targaryen clan has been wiped out, Robert responds: "Not all of them" (*cough* Daenerys *cough*).

The feather seems to rest on Lyanna's grave until a few seasons later, when Sansa meets Littlefinger in the crypts. Sansa picks the feather up off the ground where it has fallen, and it prompts the two to discuss Lyanna and Rhaegar's relationship.

"Lyanna was already promised to Robert," Littlefinger tells her. "The last two riders were Barristan Selmy and Rhaegar Targaryen. When Rhaegar won, everyone cheered for their prince . . . until he rode right past his wife, Elia Martell, and all the smiles died. He rode past his wife to lay a crown of winter roses in Lyanna's lap, blue with frost . . . how many tens of thousands had to die because Rhaegar chose your aunt?"

Obviously we now realize that the version of events popularized by Robert is untrue — Lyanna wasn't kidnapped and raped by Rhaegar; the pair were in love and decided to elope, and soon afterwards Lyanna became pregnant with Jon. She gave birth at the Tower of Joy, where her older brother finally comes across her. Ned and Howland Reed take down Ser Arthur Dayne (aka the Sword of the Morning) by stabbing him in the back on their way to get Lyanna. Ned then hears screams coming from the tower, and he rushes up the stairs to find Lyanna giving birth.

As for Rhaegar? Well, Robert Baratheon is indeed the one who kills him. After Lyanna and Rhaegar elope, many believe that Lyanna was the victim of kidnap and assault rather than acting of her own free will. This controversy is what spurs Robert Baratheon's rebellion, backed by the great Houses Arryn, Greyjoy, Stark, and Tully. The Lannisters even eventually join the rebellion after the Battle of the Trident, which is where Robert succeeds in murdering Rhaegar with his war hammer.

This defeat is the beginning of the end of the Targaryens, which is why the Lannisters finally join Robert's side — like true Lannisters, they wait to see which side emerges victorious before they make a choice.

When the feather emerges again in the season eight teaser, especially at the end when it's covered with frost, it seems to hint that the Starks — especially Jon — are in grave danger. Will the White Walkers be able to kill the heir to the Iron Throne, or will Jon's siblings (er, cousins) fulfill Ned's promise to Lyanna to keep him safe? Luckily for all of us (or perhaps, unluckily), we have three months to think it over.