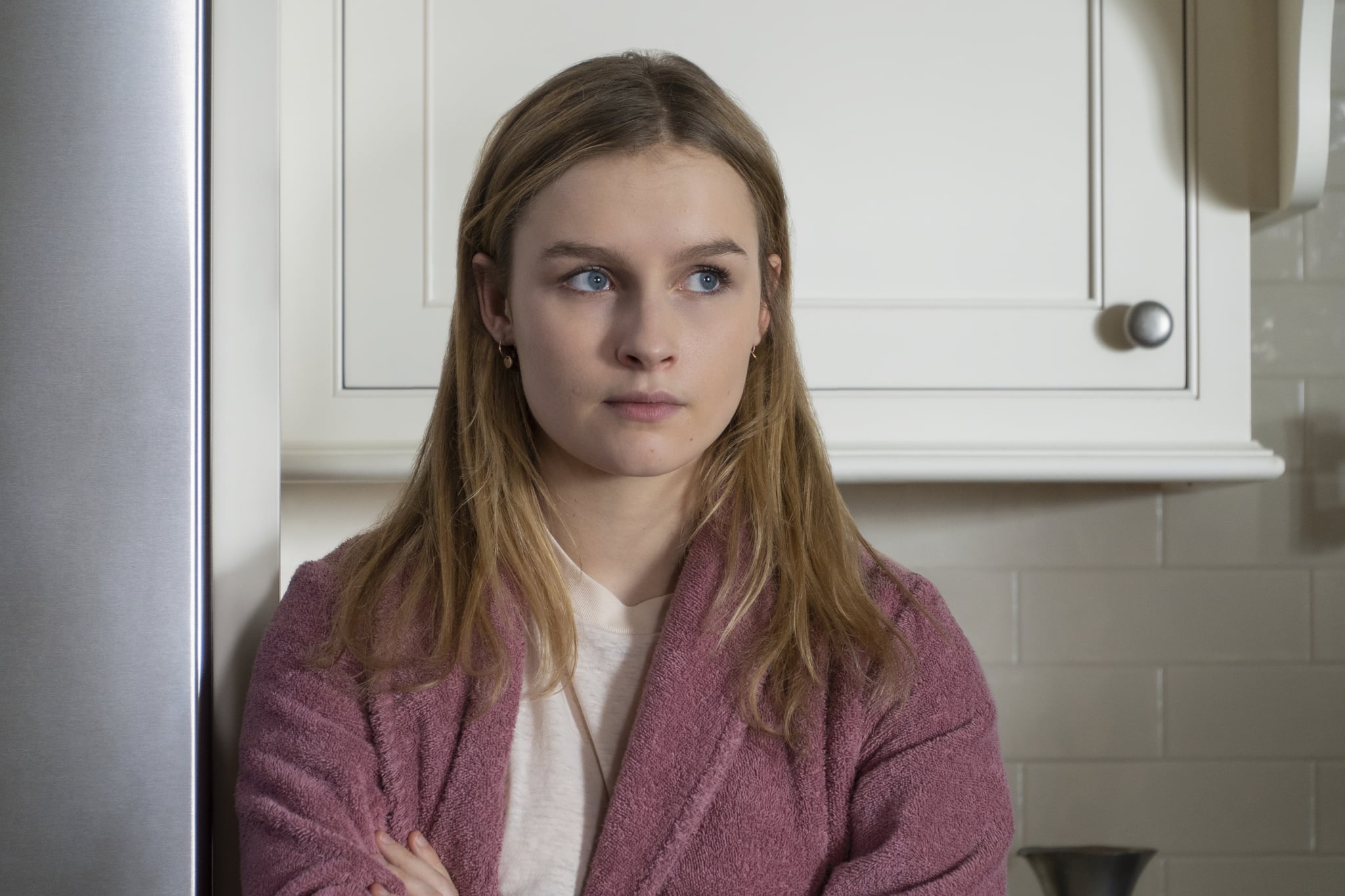 Netflix has recently established itself as a destination for original, addictive young adult series, from the sharp (Sex Education) to the hilarious (On My Block) to the soapy (Chilling Adventures of Sabrina). Its latest entry into the the teen drama genre is The Society, a 10-episode series from showrunner Chris Keyser that follows a group of teenagers who are mysteriously transported to a facsimile of their wealthy New England town after a field trip, but soon discover their parents are nowhere to be found (and then all hell breaks loose). The ensemble cast is filled with talented actors who bring a range of diverse characters to life, from the uptight class president to the wealthy bad boy. While it's hard to avoid certain stereotypes in a show about high schoolers, one character stands out as wholly original: Elle.

Although she isn't a lead — at least, not at first — Australian actress Olivia DeJonge's ballet dancer soon emerges as one of the show's most compelling characters. Every episode manages to peel back yet another layer from Elle's initially tough, standoffish exterior, until her core is left nearly broken by the deeply troubling circumstances she finds herself in — essentially the prisoner of her abusive boyfriend Campbell (Toby Wallace), who is quite literally a psychopath.

Despite enduring serious trauma at the hands of her boyfriend (which includes everything from deep bruises to the probable murder of her dog), Elle's final scene at the end of the season confirms that she's far smarter (and stronger) than anyone expected. It's a heartbreaking, but necessary, look at a toxic, abusive relationship between two teenagers, regardless of the fact it's taking place within a Lord of the Flies-like scenario.

I recently hopped on the phone with the actress following the show's May debut on Netflix, where she discussed her own experience growing up in Australia, Elle's painful transformation, and what she hopes to see her character do in season two.

Just be warned: mild spoilers for season one ahead!

POPSUGAR: So I'd love to start with what drew you to Elle, because she's one of, if not the, most complex characters in the show.

Olivia DeJonge: Absolutely. The second I read Elle, for some unknown, universal reason, I was completely drawn to her. I found her complexities, her intelligence, and her emotional nuances so interesting.

PS: Admittedly, she was a confusing character for me at first. The scene where Elle and Campbell hook up for the first time made me wonder if she was going to step up to his level of villainy, so to speak. Then of course it's revealed she's being abused and her story takes a very different turn. Can you speak to her transformation over the course of the series?

OD: So as you know, the show bases itself around chaos versus order, and what's really interesting about it is that each of the characters slip into each of their roles in order to survive. I think that Elle, her way of surviving was to make herself as a bit of a chameleon to blend in with whatever and whomever she could find a relation with. Unfortunately she was in a situation where she didn't have any friends, which is the same with Campbell. That's why they were drawn to each other. The arc itself was exciting, to take her from this quiet, inhibited girl to someone who has a lot of friends and complexity by the end of the season. You see her a lot more strong willed and levelheaded, and I think that leaves a really exciting potential for season two if we do go on.

PS: The depiction of the abusive relationship between Campbell and Elle is handled in a really authentic way, which I appreciated since that's not a usual dynamic you see between teenagers on TV. Especially not to this degree since they're living together.

OD: That was really important to me. That was definitely a discussion I had with Toby, and a discussion I had with [Keyser] about making sure that the depiction of emotionally abusive relationships — which occur all the time — were treated with the seriousness and authenticity that they deserve. Some of the scenes were quite heavy, but I think the showrunners, the directors, Toby, and myself all worked really closely to ensure that the environment was comfortable [while filming]. I also think it's really important to show the psychological impact that abusive relationships can have on people, and how they can impact people emotionally just as much as they do physically.

PS: I think that scene of Elle in the bathroom practicing how to smile before interacting with Campbell was such a good, crushing way of showing that.

OD: Yeah, it is. There are elements to Elle's story that everyone can sort of relate to as a young teen, especially when you have to put on a happy face. There's also the scene when she's dressing up to go and meet her friends and she ends up rejected. There's a lot of relatability in her insecurity and vulnerability. That's why I was drawn to her, and why I hope the audience is, too.

PS: The Society really explores the complexities of social circles, and unfortunately, as you mentioned, Elle is rejected by her peers over and over again. Why do you think it was so important to include that aspect of the character?

She's bursting at the seams to be somebody, she just needs someone to give her a chance.

OD: For myself, I just took it on board and brought myself back to junior school days. I moved interstate when I was 17, from Perth to Melbourne, and I know that feeling of getting dressed up and going somewhere and putting yourself out there, and how scary that is. It affects your body and your mind. That's what I wanted to bring to it. As much as she's depicted as a bit of a loner, she's got a lot of personality. She's bursting at the seams to be somebody, she just needs someone to give her a chance. I guess that's why she was so drawn to Campbell.

PS: A scene that I'd love to get your perspective on is the one in the finale, when Elle is almost defiantly playing piano after Campbell has dragged her back home. What's running through her mind at that point?

OD: That was actually quite a discussion we had at the time, because of all the emotions involved in it. It's that sort of quiet victory that Elle celebrates at the end. It's a victory that really only she knows, do you know what I mean? To have that lovely scene in the bed, with her [and Campbell] looking into each other's eyes, it's very intimate. I think that last piano scene is when she's truly free in her own mind, and she's sort of regained a self-confidence that Campbell had taken away from her. That's essentially what it is. She's got a plan of attack now, and she knows what she's doing and where she's going. She just has this inner freedom despite being trapped in this abusive relationship.

PS: If the show returns for a second season, how would you like to see Elle's story evolving moving forward?

OD: If we go again, if the gods allow it, I'd love to see her get the strength to leave Campbell. Absolutely. And hopefully get more involved, perhaps, in the politics of the show, getting more involved with Allie and seeing her branch out. Maybe she'll get some more friends, which I think would be great for her. But yeah, I'd love to see her branch out to politics. She has such a passion for doing what's right, and she can relate to the people when it comes to being done wrong given her history.

Season one of The Society is now streaming on Netflix.

Netflix
Raven Addresses Her Breakup With SK in the "Love Is Blind: After the Altar" Season 3 Trailer
by Njera Perkins 1 hour ago

Phoebe Dynevor
Phoebe Dynevor Not Returning to "Bridgerton" Season 3: "If They Ask Me Back . . . Who Knows?"
by Eden Arielle Gordon 22 hours ago