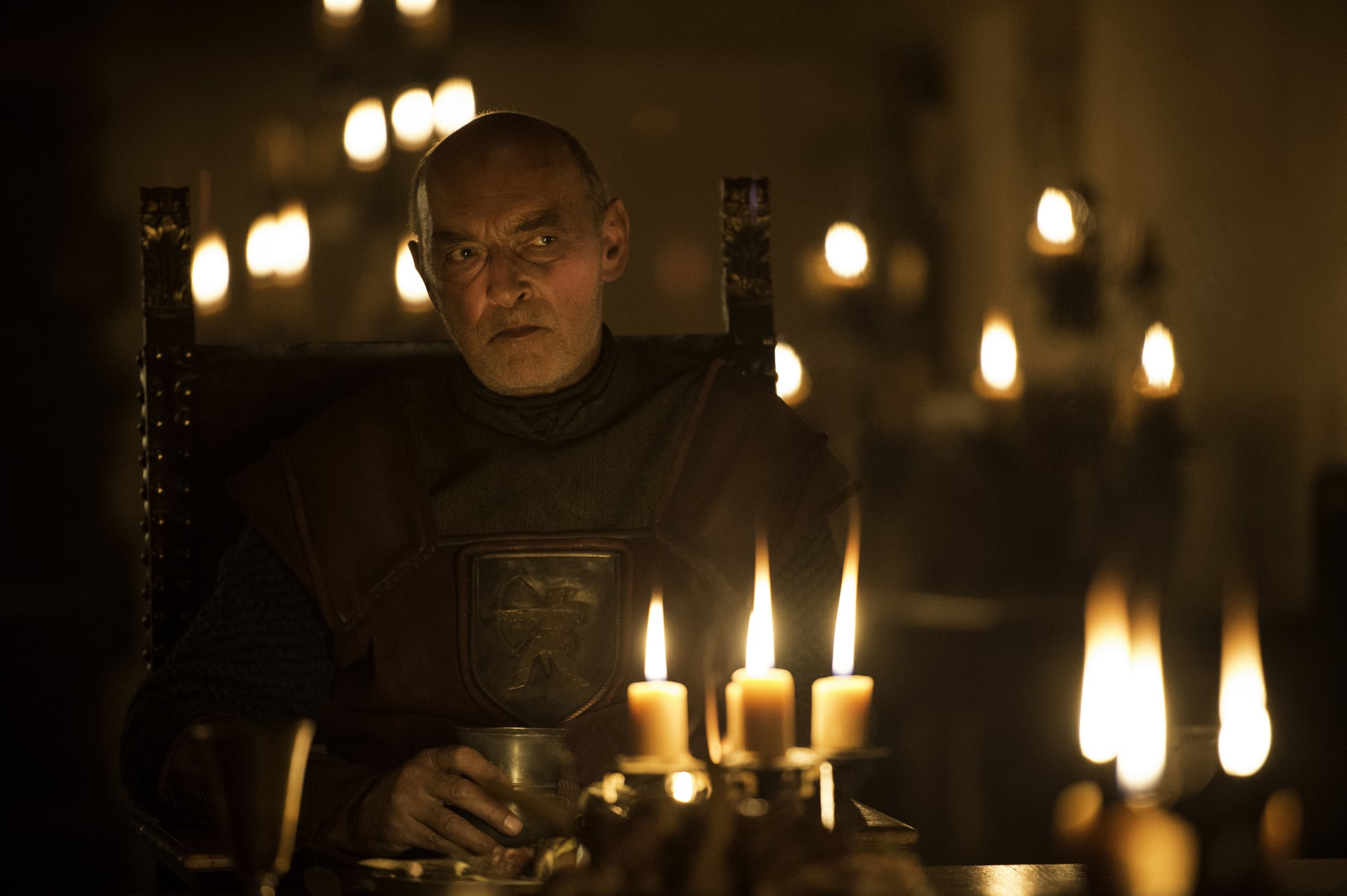 With Tywin Lannister, Stannis Baratheon, and Roose Bolton all dead, there's a haughty-patriarch vacancy on Game of Thrones, and Randyll Tarly is ready to fill it. Sam's stern father has all of the qualifications that make him a force to be reckoned with on the battlefield — and a powerful ally to House Lannister. Randyll is all about preserving his family's good name, at least in public. That's what had driven him to threaten to kill Sam if he doesn't take the black, and it's what keeps him from immediately bending the knee to Cersei when she summons him to help her defeat Daenerys and her army.

There's truly no end to Randyll's pride, but he's not all talk. He believes in the Tarly name because he is a well-respected leader in the Seven Kingdoms with an impressive military background and a reputation of being fair — at least publicly. While his treatment of Sam is undeniably cruel, he's not an outright monster like Roose, and he's not one for conspiring behind someone's back. Randyll is mercilessly straightforward with people, and he doesn't fight dirty.

The reason Jaime is keen on finding a way to convince Randyll to turn his back on his allegiance to House Tyrell is because the Tarly patriarch has one of the greatest military minds in all of the Seven Kingdoms. Unfortunately for the Lannisters, the Tarlys have been sworn to the Tyrells since before Robert's Rebellion. In fact, they both originally fought for House Targaryen, and that allegiance is what led to Randyll crushing Robert's army at the Battle of Ashford. As Stannis tells Sam when the two meet in season three, Robert's belief that he was invincible led him to launch an attack too far West, and Randyll's expert command of strategy easily beat out Robert's brute force. The Battle of Ashford is the only battle Robert lost during his rebellion, a fact that makes Randyll a highly coveted commander in Jaime's eyes. With Randyll on their side, the Lannisters would have a far better chance of winning the war than they would without him.

However, the best way to earn Randyll's trust is not to publicly ask him to break his ties with Olenna Tyrell. Appearance is everything to the head of House Tarly. Sam's stories about his childhood and his father's threat to make his death look accidental if he didn't join the Night's Watch are indicative of Randyll's fear of his family being perceived as anything other than strong and proud. That's why he reacts with so much indignation at the very thought of joining forces with the people who murdered Lady Olenna's family. He tells Jaime:

"I'm a Tarly. That name means something. We're not oathbreakers, we're not schemers. We don't stab our rivals in the back, or cut their throats at weddings. I swore an oath to House Tyrell . . . ."

Randyll could still be tempted to join the Lannisters if he can be convinced a new alliance won't tarnish his family name. The temptation to become Warden of the South has to be enticing to a man like Sam's father. It would put his family at the very top of the social and political ladder and add to his legacy as a skilled soldier. Additionally, it would be a smart move to make if Randyll wants to create a secure future for Sam's younger brother, Dickon, whom Randyll sees as his true heir. Setting House Tarly up as the most powerful family in the South would be Randyll's crowning achievement. First, he needs a way to justify betraying Olenna, though, and despite his protests, it likely won't be too hard for him to find one. After all, this is a man who disowned his son for no other reason than he had no taste for war or fighting.

Randyll is officially the wildcard character you need to keep your eyes on during season seven. The man who defeated Robert Baratheon may very well end up being the man who brings down the Dragon Queen before all is said and done.