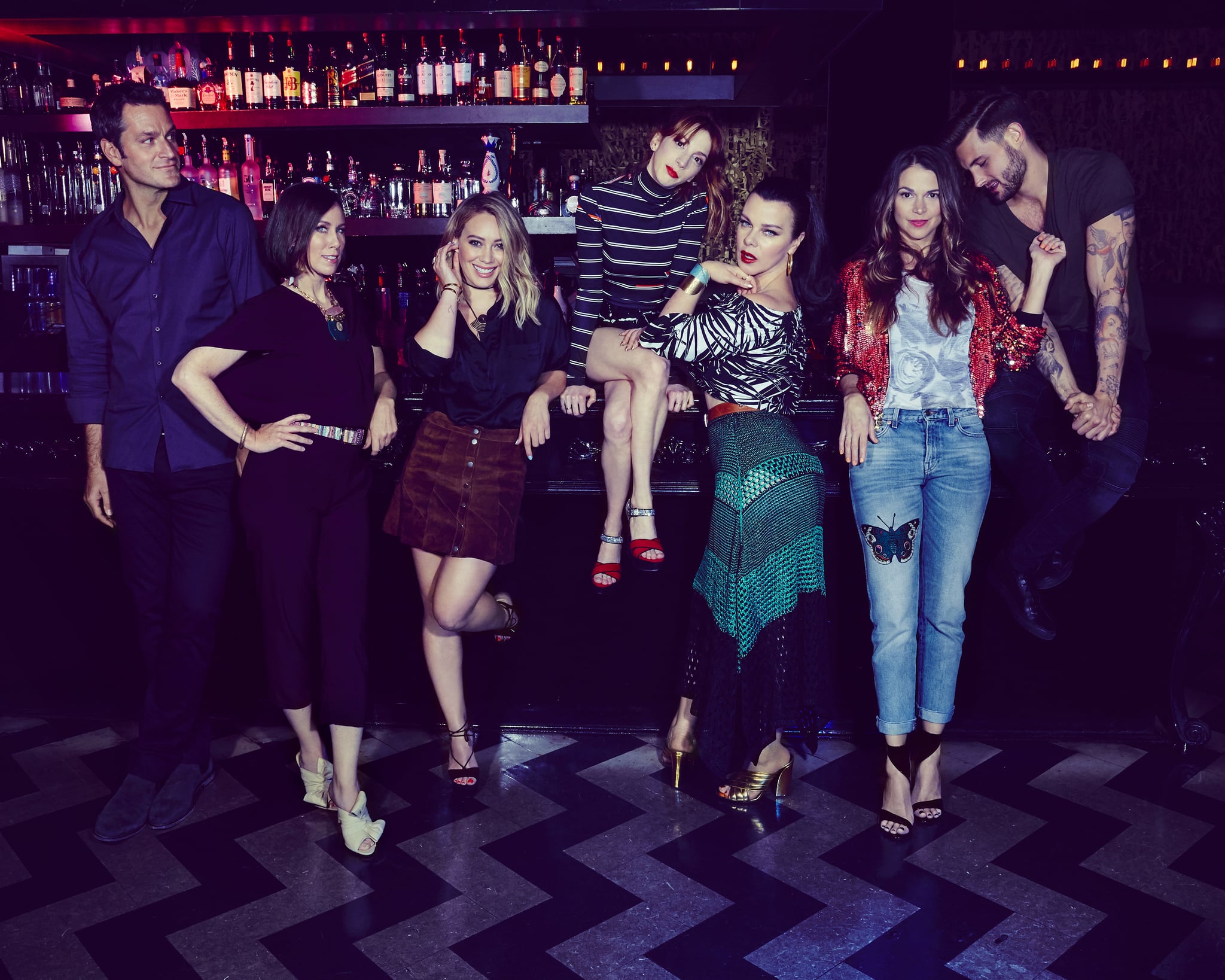 Season three of Younger premiered this week, and with it came a whole new wave of obsession for the killer cast. Hilary Duff, Sutton Foster, Nico Tortorella, Debi Mazar, Miriam Shor, Molly Bernard, and Peter Hermann play the hilarious and witty main characters, and POPSUGAR recently sat down with the stars to talk all things season three, their craziest NYC stories, and lying about their ages.

POPSUGAR: New York City is its own character on the show. What's the craziest thing you've ever done here?

Nico Tortorella: I got a public urination ticket once. I don't think I ever paid it, so if I got pulled over, there might be a situation. It was two years ago, right outside of my house. I ripped it up — I don't remember any of this — apparently, I ripped up the ticket and threw it at the cop and went upstairs.
Miriam Shor: I went to a bar once, a great bar. I thought, "I'm going to go into the bathroom and just take a rest. A quick rest. I'll come right out!" Maybe it took me longer than I thought. I may have snoozed a little. In that interim, when I came out, the bar was closed. You want people to still be there, the lights shouldn't be off, and the bar stools shouldn't be on the table. It's one thing to close the joint, but to be in the joint after it's closed is another. I just remember being like, "That was a poor choice, but this is going to be a good story."
Debi Mazar: Oh my God, I'm a New Yorker. I lived the disco era and the era of when things were not judged. There was no social media, no selfies, no pictures taken. I've kind of done it all. It's not really just one incident. This is where I grew up, and I learned everything in the streets. I'm watching The Get Down right now, and I was there at some of those dance halls up in the Bronx River Houses and stuff like that. I've done a lot of things that are probably embarrassing. You have to learn from your mistakes, so I have no regrets. I'm still here.
Molly Bernard: I once broke into an apartment building and had a lot of fun on a roof and stayed there until the sun rose and then snuck out through the service entrance of the building. That was pretty wild. I'm also a cyclist, so I bike all over the city. I once stayed up all night biking. I biked over every bridge that connects to Manhattan.
Hilary Duff: I'm such a neurotic! I don't know. I can't think of anything.

PS: Since lying about your age is a huge theme on the show, what's one question you would ask someone if you were a bouncer at a club and wanted to trip them up?

NT: "What sign are you?" Or asking them the main street in the town they're from.
MS: "Who is your senator?" No, I don't know. I'm also just like, "Who cares?" Just let them in! Unless they're 12, in that case, "Have you gotten your period? You cannot come into this club until you've become a full-grown woman. Have you started shaving yet? Get out of here." DM: Ironically, I have been a bouncer at a club. It was called The Roxy, and it was a roller rink. I used to have to tell huge dudes that they couldn't smoke or drink on the roller rink floor. But to trip somebody up, I could ask them about a song dated back to a certain time or a commercial that I might have seen that was about pop culture.
MB: I'd be like, "What's your apartment number?"
HD: "What year were you born?"
Sutton Foster: Oh god, I'm too old to do the math. I've seen girls who are like, 13, and I think that they're 25. It's just completely different. I'm like, "How old are you? What are you wearing? Who let you out of the house like that?" I would fail. I'd be like, "Oh, just go in."

PS: What advice would you give to your younger self?

DM: Don't smoke, and save your money.
HD: I guess just be bold, and that everything's going to be OK. If you're bold, obviously don't be reckless, but be bold because I think a lot of people get older and have regrets that they didn't do what they wanted. It's easy because it's scary to fail, and the older you get, the more you put yourself out there, the harder the fail's going to look. Just be bold.
MB: Just to calm down, and that there's no rush to have it all together.
MS: Stop being so self critical, because it can stop you from being really creative. The younger generation now feels legitimate about having a voice in a way that my generation, which is only one removed, doesn't have, which is really exciting. Especially young women. They have a voice and don't feel apologetic about speaking up. That's something I feel like, in my 20s, I would have been like, "Your voice is just as important. Think about what you're saying. You get a place at the table. Don't be ashamed, don't be afraid, and don't apologize."
Peter Hermann: Do everything. You have time. Time behaves differently than you're convinced it does now.

PS: Season two ended with that crazy twist of Thad's death. What was your reaction to that?

MS: It was real intense. We got the scripts when we were at work and we were like, "Ohhhhh my God" from different areas. We were like, "Game of Thrones isn't the only one, alright. Welcome to OUR red wedding."
HD: It was crazy. But Kelsey doesn't really break down, because she didn't really want to be with him. This is terrible to say, but I'm not sure how deep she is. I think that she has her priorities straight, which is she likes having a good time, but she's super career driven. She wants it all to look good, but maybe she just hasn't met the right person yet that brings that out in her. It definitely wasn't Thad, but Thad was the person she was told she was supposed to be with because he's successful, he's good looking, he might have come from the right family. That was her thing.

TV
It's a Sin: The People and Events During the HIV/AIDS Outbreak That Inspired the Series
by Navi Ahluwalia 3 hours ago