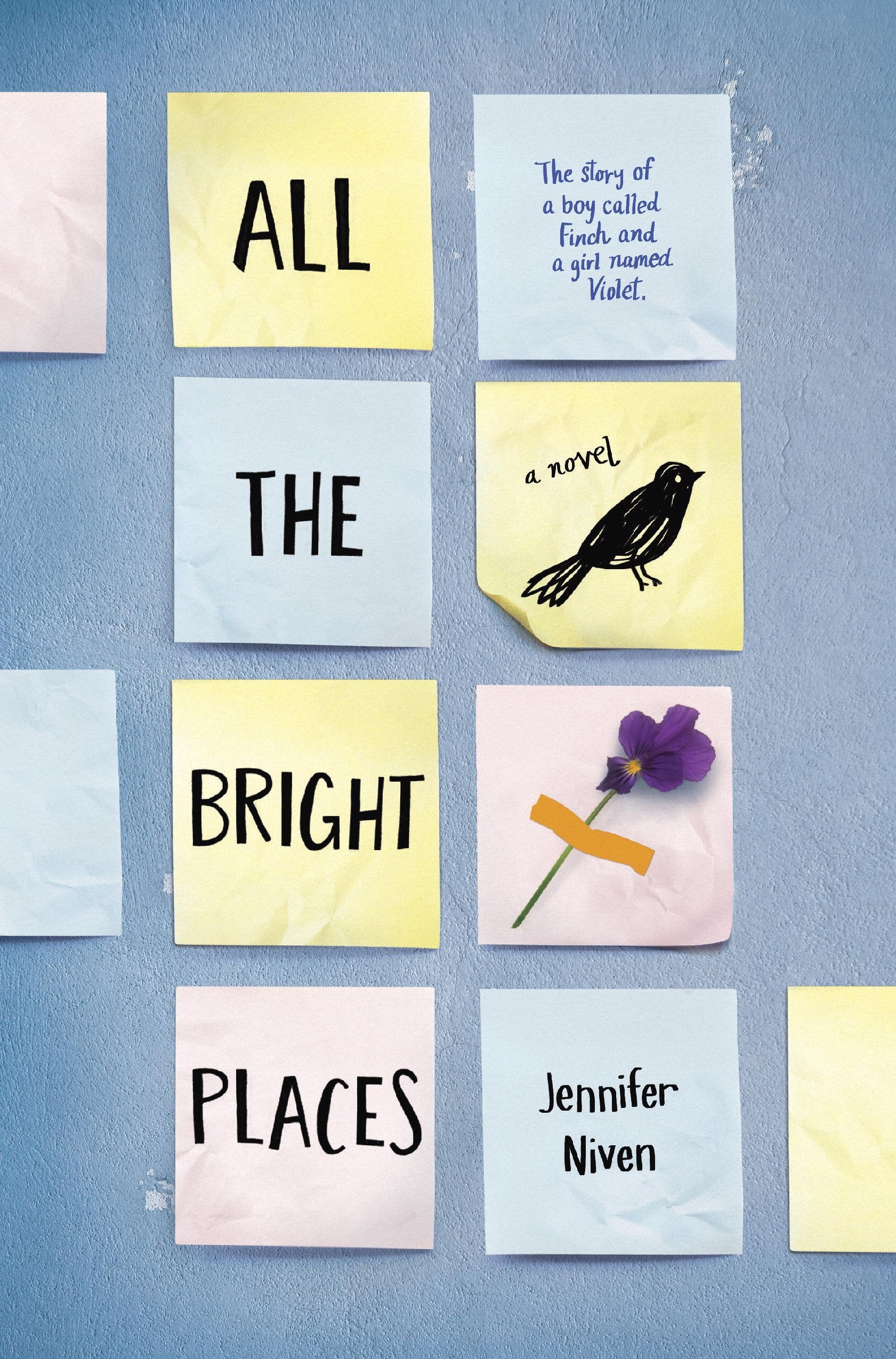 All the Bright Places, set to be Netflix's latest teen drama, is a book that will stay with you long after you turn the last, tear-stained, page. Jennifer Niven's YA novel is an unlikely love story between two broken teenagers: popular girl Violet Markey and social outcast Theodore Finch. If you are planning to read it, prepare yourself to devour it in one sitting. (Also make sure to have a box of tissues at the ready, because you'll be crying like a baby for the last 50 pages or so.)

Before the film starring Elle Fanning and Justice Smith hits the streaming service, let's take a deeper look at the story, which serves as reminder to treasure the happy moments with the people that we love. While the movie, available Feb. 28, may not be an exact replica of the book, be warned that this post contains spoilers for key events in the book!

The book opens with Theodore Finch, who strictly goes by his last name "Finch," poised on the six-story ledge of his school's bell tower, fully prepared to jump to his death. Coincidentally, Finch finds that he is not alone on the ledge. He is joined by Violet, who is also contemplating suicide (the abrupt introduction is not unlike Nick Hornby's 2005 novel, A Long Way Down.) Although it is unclear who saves who, both teenagers make it off the bell tower alive.

At the heart of All the Bright Places is a love story between death-obsessed Finch, who is fighting to find a reason not to die, and Violet, who is trying to find any small reason to live. Violet is grappling with the death of her older sister and best friend, Eleanor, who was killed in a car accident the previous year. Ever since Eleanor's death, Violet does not feel like the same person that she once was. She doesn't like her old hobbies, her old friends, or even her own appearance. She especially doesn't like herself.

Finch, on the other hand, has undiagnosed bipolar disorder, which means he experiences high highs, but also incredibly low lows. And it doesn't help matters that he also about a million other problems on his plate. The troubled teen is not only the school punching bag, but has also been physically abused by his father since he was a little kid.

After their fateful introduction at the bell tower, Finch and Violet cross paths again in their high school geography class. The teacher assigns the class a new project; they need to pair up with a partner and write a report on special places they can find in their home state of Indiana. Guess who decides to be partners?

Violet is initially reluctant to embark on the project and is angry at Finch for ambushing her into being his partner. However, the geography assignment marks a turning point in both damaged teens' lives: they begin to heal. Finch comes up with his own set of rules for the assignment. They must use maps, and not apps. They must take turns deciding which places to explore (which the pair start to refer to as "wanders"), and they must leave something behind at every stop.

And thus, the romance begins. On a starry night, the lovebirds climb to the top of the Puritana tower. They pay a trip to a field of retired bookmobiles. They even climb up Hoosier Hill, the highest point in the state. After making a pit stop at the home of a man who builds his own backyard rollercoasters, Finch kisses Violet for the first time. "The air around us feels charged and electric, like if you were to strike a match, the air, the car, Violet, me — everything might just explode," Finch narrates.

As the pair journeys across Indiana, their emotional connection deepens. After nine months of refusing to get behind the wheel, Finch convinces Violet to drive again, a hurdle she has struggled to leap over since her sister's car accident. Violet also begins writing again, a passion that she had temporarily abandoned, and she uses her talent to create an online magazine for girls.

While Finch pours all of his energy into helping save Violet, he refuses to be healed himself. He tells Violet that he is not "a problem. Not a diagnosis. Not an illness. Not something to be rescued. I'm a person."

At this point, you might be hoping that this story has a happy ending. But just as everything starts to get good again, the novel takes a turn for the worst. One lazy, sunny afternoon, Finch and Violet go on another "wander" to the Blue Hole, which they believe to be a bottomless lake. One thing leads to another, and the couple has sex. The only problem is, they accidentally fall asleep . . . and don't wake up until the next morning. This incident sends Violet's parents into a full-blown panic and they refuse to let her see Finch again. The one bright light in her very dark world, now gone.

Forbidden from seeing Violet, Finch begins a dark and twisty downward spiral. Remember the low lows that we mentioned? Well, this is one of them. He permanently moves into his bedroom closet and gets expelled from school, after beating up the town bully, Roamer. Finch's spiral reaches an all-time low when he attempts suicide again, by consuming a bunch of sleeping pills. Immediately regretting his decision, he rushes himself to the ER and has his stomach pumped. When Violet hears of Finch's latest suicide attempt, she confronts Finch, and he runs away.

It doesn't take Violet long to realize Finch does not want to be found. We later discover that Finch has set off on his very last adventure.

Yes, Finch dies. Make sure to have that tissue box handy.

Let's back-track. A month after his disappearance, Finch sends emails to all of the people in his life (13 Reasons Why style but without the tapes and the blame). These are his final goodbyes. Upon receiving her email from Finch, Violet immediately suspects what's up. She rushes to the Blue Hole and finds Finch's clothes tidily folded on the lake's bank.

The Moral of All the Bright Places

All the Bright Places teaches us that even when you love someone, sometimes you can't save them. Love does not heal all wounds, life isn't always a fairy tale, and not all books have happy endings. But that doesn't mean that there isn't hope. In the last chapter of the book, Violet goes swimming by herself in the Blue Hole. She relives all of her moments in that spot, the best and the worst, and finds a balance while she treads water, not letting herself sink or float. She allows herself to get excited about the future, and everything that is yet to come. We are left with the feeling that everything is going to be OK.

Violet decodes her final texts from Finch and retraces his steps. She finds a song that Finch wrote to her on the last stop of his final "wander," which helps her let go of any last traces of guilt regarding his suicide. Even after his death, Finch is still there for Violet. Always and forever.