Out of the dozens of real-life-inspired musician stories we've seen on the big screen, Baz Luhrmann's "Elvis" is unlike any other. The director's biggest film to date — with a cast that features Austin Butler, Olivia Dejonge, Kelvin Harrison Jr., Alton Mason, and Yola — is also his most ambitious, using the perspective of Elvis Presley's manager Colonel Tom Parker (portrayed by Tom Hanks) to tell the story of the rock 'n' roll icon we have yet to hear.

Between the film's whimsical intro and its fast-moving plot that crams Elvis's entire career into 159 minutes, "Elvis" is not the biopic fans are expecting. In fact, Luhrmann has never even used that word to describe the movie. "It's not a biopic. I didn't set out to do [one]," he tells POPSUGAR. "Anything I do, I want it to be helpful for where we are now; useful in the future."

Luhrmann's version of useful didn't involve making the same Presley movie we've already seen. Instead, he aimed to create a larger-than-life film to shed more light on Parker's role in the late singer's career and how many blame him for the star's decline. Luhrmann's Presley story also treads on the political side as it focuses on some of America's most controversial eras — the '50s, '60s, and '70s, aka "the good, the bad, and the ugly," as the director puts it. "It's this giant life, and I thought [the 'Elvis' plot] was a great canvas to have these underlying bigger ideas," Luhrmann adds. "So that's what I was gunning for." 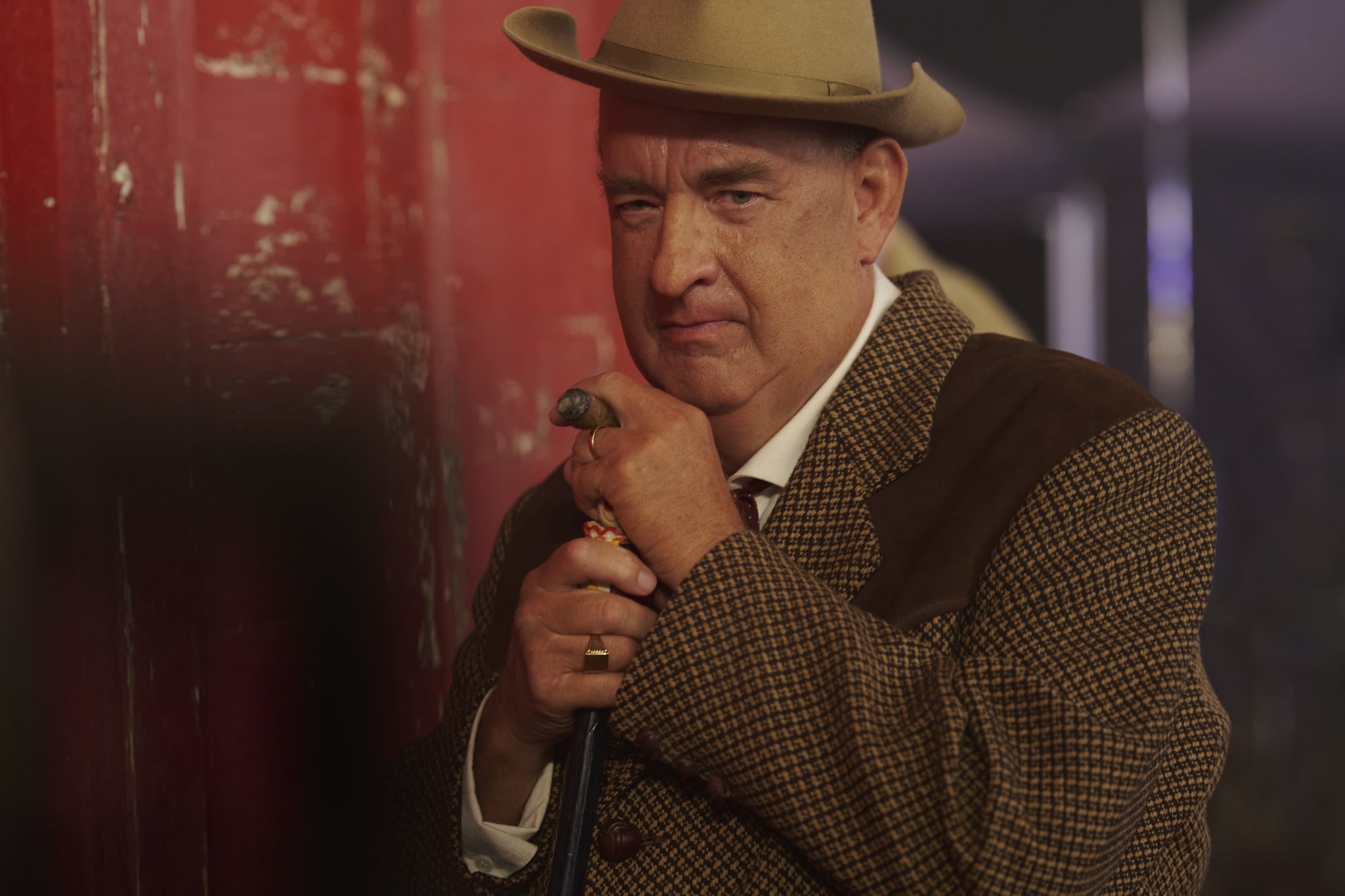 "I said [to Luhrmann], 'That's new stuff. In that case, that means you're making a brand-new movie about Elvis.'"

When Luhrmann decided to make "Elvis," he already had Hanks in mind as his narrator and antagonist. "'I'd like to come over and talk to you about a project I have, but I want you to know before I come over, it's about Elvis,'" Hanks recalls of a conversation between him and Luhrmann. "I just thought, 'Why would you be coming to talk to me about Elvis? To play [his father] Vernon?' . . . But he came over and said, 'Look, no one knows the story of Colonel Tom Parker and Elvis. There would've never been Colonel Tom Parker were it not for Elvis, but there never would've been Elvis were it not for Colonel Tom Parker."

Hanks admits he'd never seen a photo of Parker nor heard his voice. But one of the first lines in the "Elvis" script intrigued him enough to say yes to starring in the film. "[Luhrmann] says, 'I want this movie to start with, essentially, Colonel Tom Parker saying, 'I didn't kill him,'" the actor says. "I heard that and I said, 'OK, the Elvis Presley story has never been told like that.' . . . With this new element of the guy who made all of Elvis's dreams come true, and then also didn't quite realize the great, grander dreams that Elvis had, I said [to Luhrmann], 'That's new stuff. In that case, that means you're making a brand-new movie about Elvis.' And I like making brand-new movies."

"I made a rule that if I couldn't find someone who could be Elvis or play him, I wouldn't make the movie."

Luhrmann's "Elvis" movie wasn't about the director's fandom for Presley, "it was more telling this grand story," he remarks. To tell a story as imaginative, daring, and lively as Luhrmann's Presley flick, he needed an actor with enough star power to match it — and he found Butler.

From the moment Luhrmann received Butler's informal audition tape of him singing "Unchained Melody," the director knew he'd found his leading man. And before long, the similarities between the two stars were undeniable. After a year and a half of preparation, Butler got his Presley portrayal down pat — from the singer's voice to his walk to his wild dance moves. Luhrmann knew he'd made the right casting decision, even if others couldn't recognize Butler's skills.

"[That's why] I put the video out there," he says of a recent clip he posted of Butler on social media. "Because people don't believe he sings the young Elvis [vocals]. Even though I put that video out on TikTok, I'm still getting people going, 'Yeah, but is he really singing?' So even with my vast experience of filmmaking, the Austin journey is like no other."