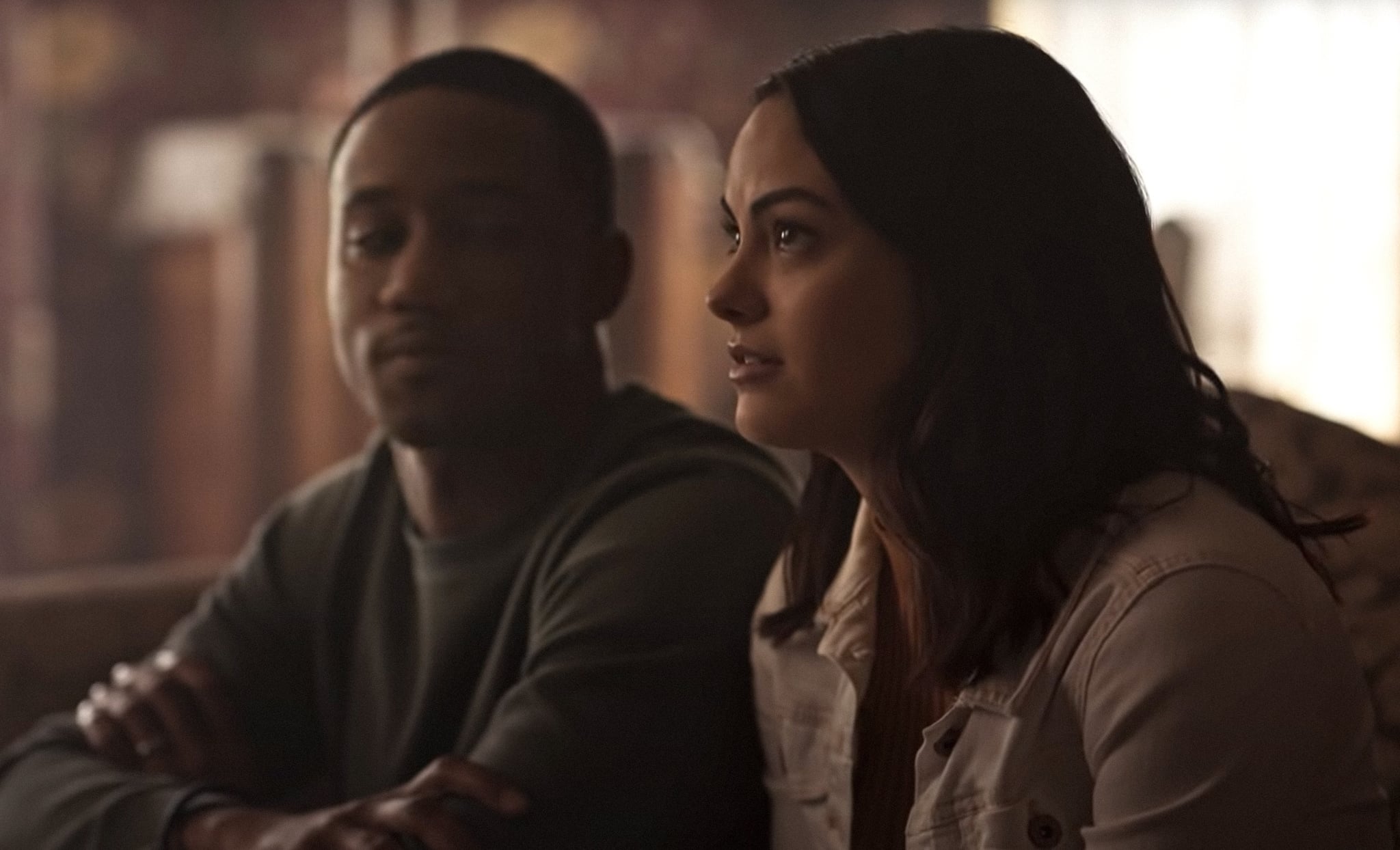 Dangerous Lies on Netflix is one hell of a wild ride from beginning to end. This Netflix original thriller has a little bit of everything: murder, robbery, creepy guys prowling around the house, and diamonds! The film stars Riverdale's Camila Mendes alongside Jessie T. Usher as a young married couple in Chicago, and when we say it takes many twists and turns, we truly mean it. For a detailed breakdown of how the whole movie plays out — including the slightly ambiguous ending — keep reading.

How the Story Starts

In the beginning of the movie, Katie (Mendes) is waitressing at a diner in Chicago when a gunman storms in to rob the place. Katie's husband, Adam (Usher), who is studying at the diner to watch over Katie, manages to stop the gunman by knocking him out. The film then fast forwards a few months to Katie now working as a home healthcare aide with a man named Leonard (Elliott Gould). Though Katie seemingly goes to work for Leonard because it's a safer option than a dicey diner downtown, things quickly go awry at Leonard's large house, too.

When Things Take a Turn

A man named Hayden (Cam Gigandet) shows up at Leonard's door one day telling Katie he has a client who wants to purchase the house. She tells him it's not for sale and the man who lives there would never agree to sell. This is right around the time Katie gets Adam a job at Leonard's house doing yard work so they can make ends meet.

Soon after, Leonard dies in his sleep, and while Katie's upset, she thinks nothing of it because of his age. After Leonard dies, Katie and Adam discover thousands of dollars in cash in the attic and decide they should keep it because Leonard has no family and no one will ever know they have it. They end up locking it in a safe deposit box.

Police investigate Leonard's death, and Katie and Adam are suddenly under a microscope as possibly having something to do with what happened. Julia (Jamie Chung), a lawyer claiming to have been contacted by Leonard recently, shows up and tells Katie that Leonard left everything, including his house, to her, as he had no family. Despite the oddity of this, Katie and Adam move in. It is then that they discover a dead body and a bunch of diamonds in the house's garage.

As Katie is getting rid of Leonard's medications, she realizes one of the pill bottles is empty and shouldn't be, and she knows someone purposely poisoned Leonard. The detective investigating the case, Detective Chesler (Sasha Alexander), keeps pressuring Katie and Adam for answers and eventually believes Adam may be to blame. When Julia starts planting the same ideas in Katie's head, Katie thinks they could be right and starts to doubt her husband. And when Katie goes to get their money out of the safe deposit box and discovers it's gone, she fears Adam has taken the money and run.

She returns home to find Adam packing a bag, not to run away from her, but with her. Then Hayden shows up out of nowhere again, after recently popping up in their backyard only to be sent away by Katie, and asks where the diamonds are. It turns out the dead body Katie and Adam found was Hayden's former partner in crime who kept all the diamonds for himself. After a quick fight between the two, Adam and Hayden both shoot each other. As Katie is crying over Adam's dying body, he whispers, "In the garden," seemingly pointing her to the location of the diamonds. Julia the lawyer shows up, also out of nowhere, and reveals she's in on the diamond heist, too. Now she wants to know where the diamonds are, but seeing as Adam is the one who hid them and is now dead, Katie can't do anything to help her.

In comes Detective Chesler, who confronts Julia (who totally made up the will giving Katie all of Leonard's belongings) and ends up killing her.

We then fast forward another six months when Detective Chesler tells Katie the case is finally closed and her future child won't grow up thinking they had a dad with a record. Oh yes, because Katie is pregnant with Adam's baby and still living in Leonard's house. Detective Chesler asks her if she knows where the diamonds are, and Katie insists their location went to the grave with Adam. The sprinklers in the yard kick on as the movie ends, revealing diamonds resting in the mulch in the garden. Whether or not Katie actually knows they're there is up to you to decide.