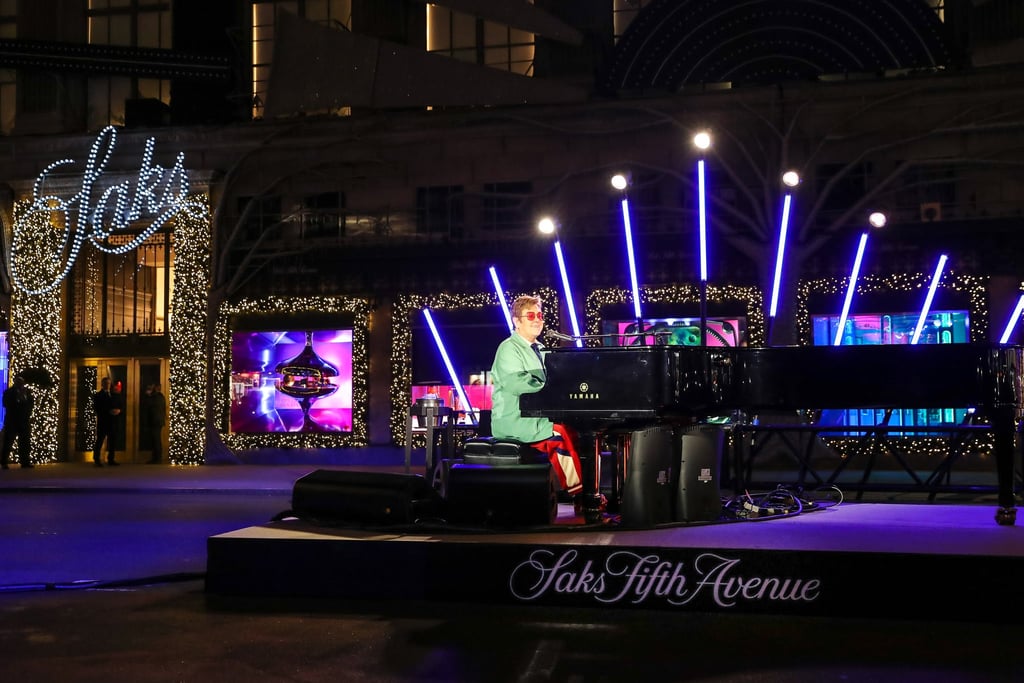 Elton John may have just performed his last stadium concert, but he's definitely not done sharing his musical talents with the world. The superstar graced New York's Fifth Avenue with his presence on Nov. 22, briefly stopping traffic to deliver a performance of "Your Song" as Saks Fifth Avenue's annual holiday window displays were unveiled behind him. His husband, David Furnish, and their two sons, 11-year-old Zachary and 9-year-old Elijah, also stepped on stage to greet the audience alongside him.

As he sang, a massive web of holiday lights changed colors above him as the store's iconic six holiday-themed windows opened up, officially ushering in the most festive time of the year. Following his performance, a brilliant display of fireworks shot off the roof of the department store in time with recordings of John's "Step into Christmas," "Cold Heart Pnau Remix," "Your Song," and "Merry Christmas."

"I express myself boldly through my music and my personal style, and Saks Fifth Avenue shares the same values. We see this time and time again via their world-famous window displays and curated designer collections," John tells POPSUGAR. "Through this collaboration with the Elton John AIDS Foundation, I want others to feel safe expressing their own spirit and take joy in spreading love to others by giving back. When we accept people for who they are and what they are, the world will be a much, much better place."

Just two days before, the 75-year-old musician performed his official farewell concert at LA's Dodgers Stadium. Prior to the Nov. 20 event, which was filmed for a Disney+ special, a number of celebrities appeared in a video tribute to the star — including Prince Harry and Meghan Markle, who both thanked the musician for his ongoing friendship and support. "Thank you for being the friend that you were for my mum, thank you for being our friend, thank you for being a friend to our kids," Harry says in the clip. "We just want to say congratulations and that we are just so proud of you, so grateful that we were able to see you on your farewell tour also," Markle adds.

While the farewell concert marked the end of John's stadium-tour days and his official retirement, it certainly doesn't mean he'll stop performing, as his surprise Saks appearance exemplified. As his voice soared on the high notes in "Your Song," sounding as clear and strong as ever, one thing is clear — John's music, style, and compassion are all gifts that keep on giving.

Ahead, check out more photos from the event.