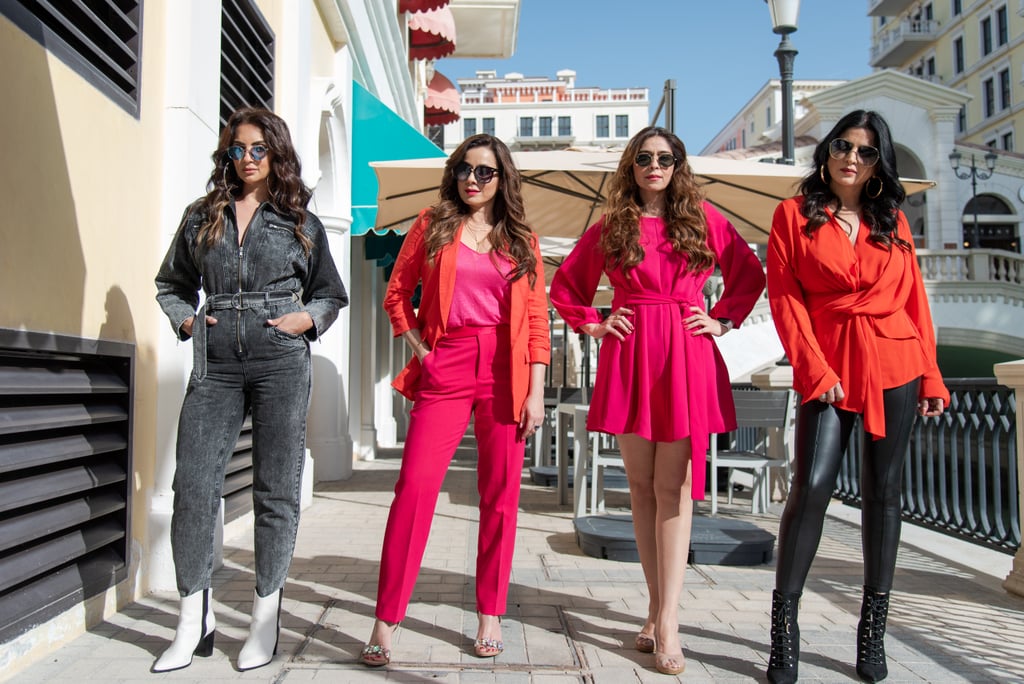 I'm just going to come out and say it: I'm Obsessed (yes, with a capital "O") with Netflix's The Fabulous Lives of Bollywood Wives. While we're used to the concept of reality TV in America, it's not every day that you get an inside glimpse of Bollywood's inner circle. India's closest comparison would be director Karan Johar's talk show Koffee With Karan, where he brings on celebrities and asks them burning questions. So, it's no wonder that Karan himself saw an opportunity and decided to create something similar to the likes of Keeping Up With the Kardashians. And perhaps it's that same elusiveness of Bollywood stars that made people even more interested in watching the show.

The eight-part Netflix series centers around the lives of Maheep Kapoor (wife of Sanjay Kapoor), Neelam Kothari Soni (wife of Samir Soni), Seema Khan (wife of Sohail Khan), and Bhavana Pandey (wife of Chunky Panday). The group have been friends for over 25 years, and the show follows them as they juggle their families, careers, and friendships — you know, like most reality TV shows. Right off the bat, I was intrigued with the opening song because it gave me major Real Housewives vibes; I was waiting for each one of them to recite their tag lines. Watching the show also really made me miss Bombay, but every time they said "bro" and "looking fab," I felt like I was right there hanging out with my friends instead of sitting in my house in the States. (Yes, those are very Bombay terms for those who were wondering.)

However, a lot of people felt that the show's name was misleading because it didn't include "A-lister" Bollywood wives like Shah Rukh Khan's wife Gauri, Amir Khan's wife Kiran Rao, or Abhishek Bachchan's wife Aishwarya Rai, who also happens to be a major actress. Still, I thought the cast was thoroughly entertaining because the four women have a history — it made the show feel a little more authentic. Plus, it wasn't like there was a shortage of celebrity cameos on the show. Both Gauri and Shah Rukh Khan made appearances in the last episode, and it was so fascinating to see them all interact and relive old memories. Other stars like Arjun Kapoor, Raveena Tandon, Malaika Arora, and Jacqueline Fernandez also came on the show! It truly showed viewers how interconnected Bollywood really is.

I also appreciated that they brought up the topic of nepotism because it runs strong in Bollywood. Maheep explained it in a matter-of-fact way when she said that if her daughter has the opportunity to enter the film industry because of her family ties, why shouldn't she take it? Her husband also commented, saying that if nepotism were strong, he would have a million roles by now, instead of his career taking a backseat after the '90s. They both have points, however, a lot does need to change within the industry. But that's a conversation for another day.

"We're all so close that I am always correcting and protecting them."

Maheep seems to be the show's main character, connecting the friend group and serving as their overprotective mama bear. We watch her focus on getting her daughter Shanaya's acting career off the ground. "As soon as I conceived my children, I was like that with them. I was obsessed," she told me. "I got married to have children, so let me make that very clear. This is me — I'm an obsessive mother. I think that comes out with my friends like Seema also. We're all so close that I am always correcting and protecting them. It just comes naturally to me, it's an instinct that I have to protect the people that I love."

Seema is the chill best friend—who isn't afraid to admit that she constantly DMs Kim Kardashian—and is refocusing her attention on her namesake Indian clothing line. Obviously, I had to ask the question on everyone's mind: Has Kim responded to one of her DMs yet? "Unfortunately not, I'm still waiting for a reply," she said. "I'm checking, but it's not happening. Kim, if you're reading this, please reply to my DMs!"

We also watch as Neelam, the prim and proper one of the group, preps for her Bollywood comeback. Neelam was a successful actress back in the '80s. She even had an iconic TV show called The Neelam Show. When asked if she would revive her hit show, she revealed that she would consider it, depending on the format. Another thing everyone seemed to be intrigued with was Neelam's accent. I wasn't that confused by it, as I've moved multiple times in my life and growing up between places like Dubai, Bombay, and New Jersey has made my accent a little bit of a mish-mash, too; my husband makes fun of me because I say the phrase "I can't" in a British accent. Like Neelam, I also went to a British school for a few years as a kid. "I just have to say one thing: people should do a little bit of homework," Neelam told me. "I was born and brought up in Hong Kong and Bangkok, where I went to British schools, so that's why the mixture and the khichdi (an Indian rice and lentils dish). I mean, listen, it is what it is. This is my accent."

"I thought maybe only my age group would watch the show and relate to it, but the beauty of it."

As for Bhavana, she's the calm, spiritual one of the group, and the series follows her journey into the fashion industry as she preps for the opening of her store LoveGen. She also acts as a momager to her daughter Ananya, who is a Bollywood actress. "Ananya told me, 'Mom, everyone in my age group, even boys, have really, really liked the show,' which was quite surprising. I thought maybe only my age group would watch the show and relate to it, but that's the beauty of it." One quirky aspect of the show that stuck with me and felt like the Real Housewives was Bhavana's love of energy facelifts. The procedure is done by a transformational healer or a life coach who transfers energy from the Earth to the face. It apparently reverses the signs of aging, and of course, I had to ask her if she genuinely believes this. "I feel like it definitely helps with an external glow, but what it really works is the inside of you," she exaplined. "Unless you are happy from the inside, it's never going to show on your face. You may do 100 things on your face, but unless there are peace and happiness inside, it will never show. In some ways, energy healing and facials not only work on the external, but also the internal. I believe in it completely, and I feel something that makes me feel good always makes me look better."

Keep reading to see the rest of my Q&A with the cast.

Related:
Why the "Stars Are Not Aligned" For Me and Netflix's Indian Matchmaking
Previous Next Start Slideshow
NetflixTVCelebrity InterviewsStreamingTV Reviews