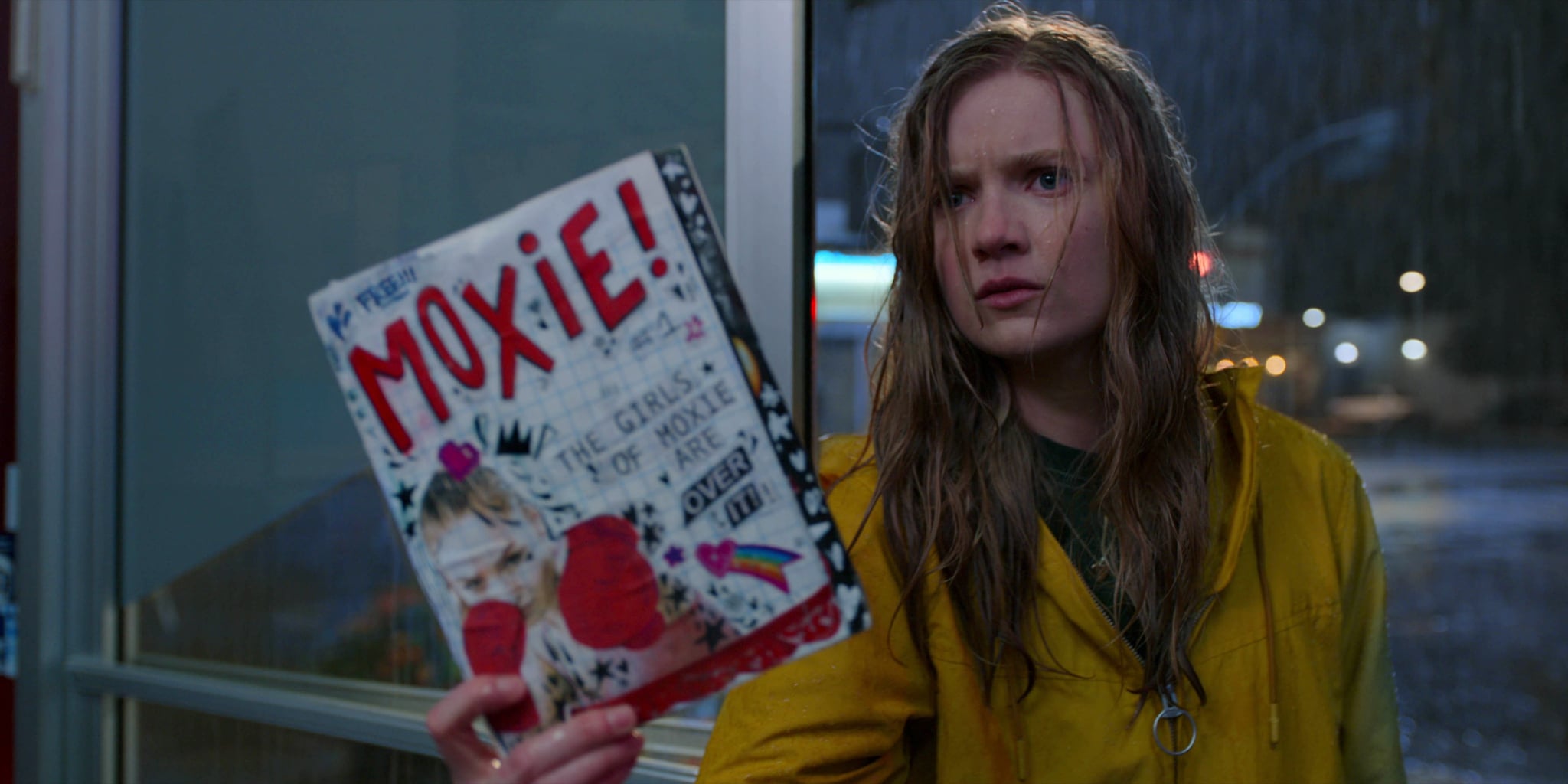 When Netflix announced they were adapting Moxie into a feature film, fans of Jennifer Mathieu's original novel were hype. I was excited, too. Even though I haven't read the book, I wanted to love Moxie, as it has all the elements I look for in a film: a fantastic soundtrack, filled with everything from Bikini Kill and The Linda Lindas to Tierra Whack and Princess Nokia; a stellar cast featuring Alycia Pascual-Peña, Nico Hiraga, Hadley Robinson, Josie Totah, Patrick Schwarzenegger, Josephine Langford, Amy Poehler, Ike Barinholtz; and more. Plus, it was Poehler's directorial debut, and I was very interested to see where her eye was as a director. Instead, what made people love the book seemed to fall flat when brought to life on screen.

When the trailer first dropped, I was among the many that were worried this was yet another out-of-touch film that romanticized harassment and took the agency from a Black girl to hype up a white girl. In the trailer, we see Vivian (Robinson) tell Lucy (Pascual-Peña) to keep her head down after she's been harassed by Mitchell (Schwarzenegger). This led to the belief that Lucy and Mitchell would be the toxic enemies-to-lovers trope. Luckily, I was way off-base when it came to my assumptions, particularly about the nature of the relationship between Lucy and Mitchell. The interactions we see between Vivian and Lucy in the trailer also leads us to believe that Vivian creates the Moxie zine right after their interaction. In the actual movie, Vivian grows slightly as a person between telling Lucy to keep her head down and reaching her own breaking point with the sexism in the school.

Related:
On Our Radar: Alycia Pascual-Peña Has All the Moxie Needed to Make a Change

As for Lucy, she's just as badass as you'd expect. The only thing that could have made her character better is if she had actually written the zine versus Vivian. Throughout the movie, everyone just assumes she's the one behind it. And from what we know of Lucy versus Vivian, that would actually make more sense. Not to mention, Vivian is kind of a sh*tty person throughout the movie. It's not until Vivian's life starts to implode that she even realizes how selfish she's been towards pretty much everyone, like her alienated best friend and new boyfriend. It's also odd that Vivian would keep the creation of the zine and what's going on in her life hidden from her mom, since she was the inspiration for the zine in the first place. 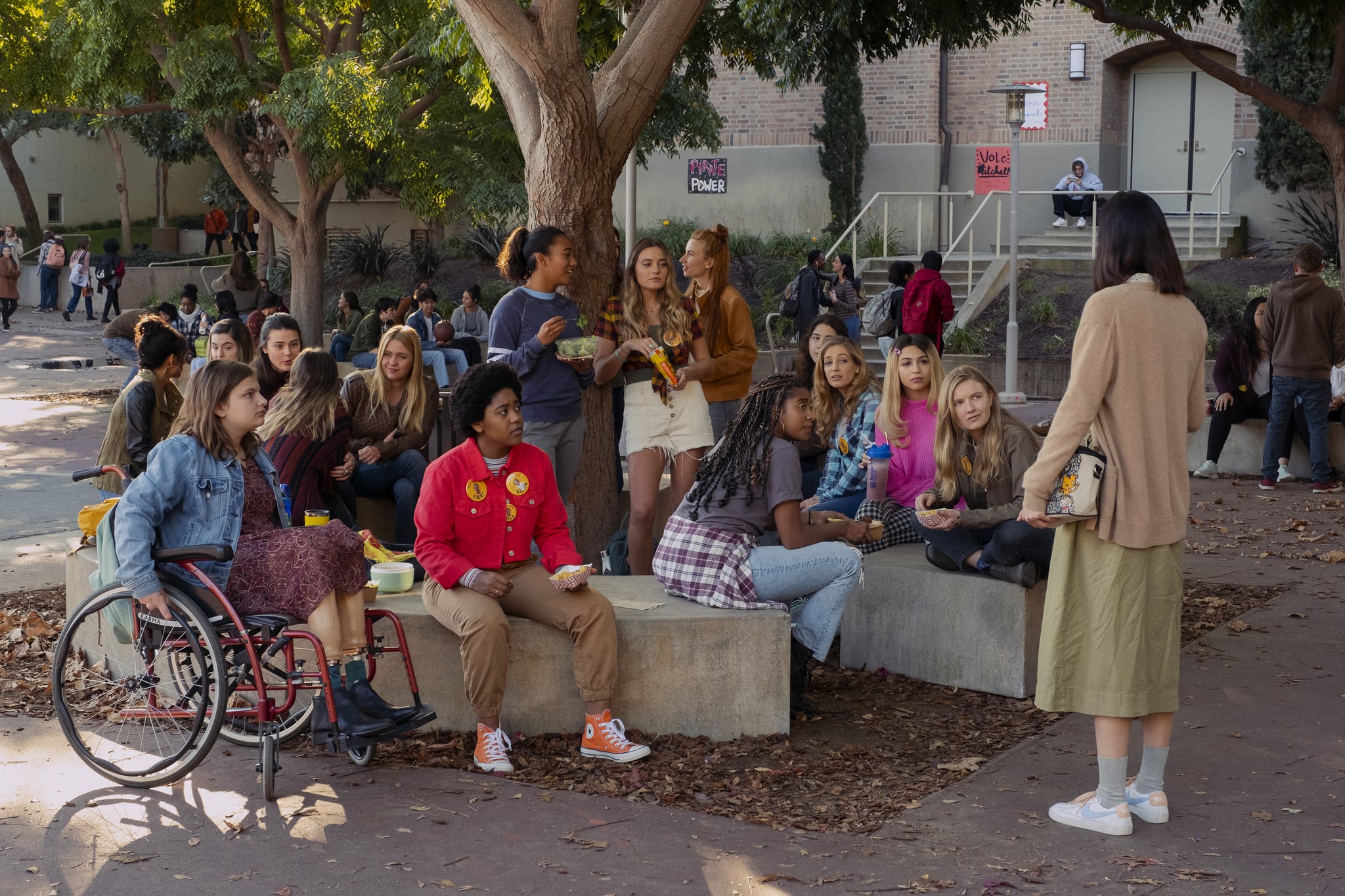 Image Source: Netflix
Moxie loses itself in its ambitious storytelling, unsure of whether it wants to be about a mother-daughter relationship, empowering friendships, or a coming-of-age story with young love thrown in. Instead, it tries to be all three, resulting in the main focus being all over the place. Even certain characters, like Langford's Emma who barely receives any screentime, felt less like people and more like set-dressing. Even the mother-daughter relationship doesn't get the setup it deserves. If it wasn't for the chemistry between Robinson and Poehler, you would've had a hard time making me believe that pair is actually close.

"Moxie loses itself in its ambitious storytelling, unsure of whether it wants to be about a mother-daughter relationship, empowering friendships, or a coming of age story with young love thrown in."

There are also other moments throughout the movie that left me . . . scratching my head. For one, why did Moxie try so hard to make us think a casket built for two was a romantic place to cuddle? A funeral home is creepy enough in the daytime. Then, there was the sheer negligence of the principal. My mom is a high school principal, and when I told her how Marcia Gay Harden's character reacted to allegations of harassment at her school, she was outright shocked. Do principals like this exist out there? Yes, but it was almost comical how bad she was at her job, let alone be able to win "principal of the year." Finally, I was a mascot in high school, so seeing Charlie Hall in costume, talking, without his head was one of the least realistic things I've seen. I get he's charming and they wanted to use him more, but the number one rule of being a mascot is to never be seen in costume without your head. At that point, they should've just had him dress as a pirate and call it a day.

This isn't to say that Moxie isn't full of adorable moments. Seeing Vivian and Seth flirt had me audibly saying "Aw!" way too many times for a 28-year-old. And, by the end of the film, I was fully ready to draw hearts and stars all over my hand in solidarity with the girls of the Moxie club. What watching this movie made me realize is that I've probably aged out of these kinds of Netflix teen flicks. It's been 10 years since I graduated high school and the experience is completely different now from what it was in the mid-2000s. Am I saying you shouldn't watch Moxie? No. What I'm saying is that you need to go in with appropriate expectations and understand it's not going to be the best thing you've ever seen in your life, but by the end, you'll probably want to join in on their ridiculous dance party.

Downton Abbey
A Look Inside the Real Villa Rocabella From "Downton Abbey: A New Era"
by Hedy Phillips 21 hours ago