The following article reflects the opinions of the author, not those of POPSUGAR Moms. There are several effective swimming programs that work every day to save children's lives all over the country. To find the perfect swim class for your baby, visit Infant Swimming Resource (ISR).

As new parents, there are so many things we are pressured to do with our children. Beyond feeling like we should breastfeed, sleep train, and make organic baby food for our precious little angels, there are the classes we feel compelled to enroll them, and therefore, ourselves, in. Before our kids even say their first words, we just know we're stunting their development if we don't put them in music class, take them to library story time, and pay to let them roll around a gym floor with other babies they completely ignore.

But the worst offender of all? Baby swim lessons.

I ignored most of the people who told me I should sign up my first baby for Gymboree or Suzuki or whatever classes that, to me, seemed excessive for a kid who spent most of her time napping, eating, and spitting up, but even I couldn't resist the call when it came to swim lessons. It was partly fear based — eventually she would be around a body of water in which she could potentially fall into, right? — but mostly it was selfish. I wanted her to like the water because her dad and I love a beach vacation, and we eventually wanted to sit on the sand or the side of the pool and drink cocktails on these vacations without fear of her dying. 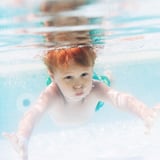 So, when she was 6 months old, I signed her up and quickly realized that baby swim lessons are bullsh*t. What I expected: a trained professional to teach my infant to swim to the side of the pool or at least float on her back like those awesome babies on YouTube, basically to save herself from ever drowning.

What I actually got: 45 minutes of holding a squirmy kid in pool, realizing that my prebaby swimwear was now completely inappropriate; singing songs, making silly faces, and helping my kid grab a plastic fish with a bunch of other, equally uncomfortable, half-dressed parents; then navigating the hell that is trying to get a freezing baby who can't even stand up and an equally freezing me dressed in a locker room surrounded by a bunch of similarly struggling babies and moms (and occasionally some dads since this was a "family" locker room).

All, as the instructor said, so our little ones would be "comfortable in the water." Gone were my dreams of watching my baby backstroke. Apparently blowing bubbles was the most difficult skill she might master. "Might" being the operative word.

After eight lessons, most of which I also dragged my husband to just so I could have someone to hand my fully dressed daughter while I stood dripping, I knew the truth: I had spent $200 to torture myself. And then, proving to myself that I am both not as smart as I like to think I am and more susceptible to mom guilt than I ever admit, I signed up for that torture again three years later with my son. After all, I didn't want him to think I love him less. 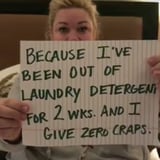 This Woman's Video Hits the Mom-Guilt Nail on the Head

I waited until he could walk — flashing back to the Sophie's Choice that was deciding whether to let my daughter crawl around a dirty locker room floor or attempt to hold her while I peeled off my own wet swimsuit and put on dry clothes — an error in judgment because he was old enough to realize that these lessons were bullsh*t, too. He didn't want to be held in a circle of other babies while singing a ridiculous song. He didn't want to scoop, scoop, scoop his arms to some stupid floating toy.

He wanted to do two things: stand on the side and jump in over and over again, and dominate the one and only cool toy there, an elaborate water mill that he absolutely refused to let another child touch, instantly labeling himself as the class's problem child. And then, when he was done, no matter how far through the lesson we were, he was done, screaming until I gave the instructor a sad wave and led him out of the pool.