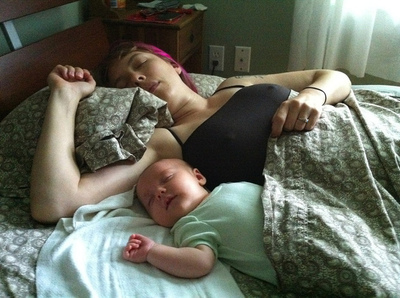 It’s a question that comes up over and over in Circle of Moms communities: Do you co-sleep with your baby? Many moms says that co-sleeping is the most natural way to bond, especially if you’re breastfeeding.  If you’re on the fence about it, here’s how our moms make the case for co-sleeping. (Stay tuned for the other side of the story, coming in February.)

What Do the Experts Really Say?

When the American Academy of Pediatrics updated its infant sleep habit recommendations late last year to include the sentence, "Bedsharing or cosleeping may be hazardous under certain conditions," mothers who co-sleep found themselves once again vigorously defending a practice that Circle of Moms member Lisa says has been “practiced for as long as humans have walked this planet.”

The interesting thing is that the recommendations (which are made to promote safe sleep and lower the risk of SIDS) don’t specifically say that parents shouldn’t co-sleep with their babies. What they do say, points out Circle of Moms member Erica G., is that there are rules you should follow to make sure you’re being safe about it. She notes those rules include things like not smoking, making sure there’s no loose bedding, and not co-sleeping on the couch.

Some moms say the language people use to talk about how mothers and babies sleep may cause confusion.  Co-sleeping doesn’t automatically mean that mothers have their babies in the bed with them, a point that mom Joy B. thinks needs to be cleared up. “‘Co-sleeping’ is when the baby sleeps in the same room as the parents, “ she says. “‘Bed sharing" is when the baby actually sleeps in the bed with the parents.”

Renowned pediatrician Dr. William Sears prefers the term “sleep-sharing.” Dr. Sears, who says he and his wife slept with at least four of their eight children when they were babies, thinks “bed-sharing” sounds too clinical and “co-sleeping” sounds more like what adults do. Sleep-sharing, he says, is a more accurate description of the harmonious interactions that occur between mother and child during the night.

Circle of Moms member Kimberly T. is a breast-feeding mother who says co-sleeping is the best thing she ever did. As an infant, her son was able to “wake in the middle of the night for a feeding with little support,” allowing her to be more rested and able to care for both her children in the morning.

Some moms aren’t willing to give up space in their beds for their babies (bed-sharing), but practice co-sleeping in different ways. Charlene W. says she got the best of both worlds by having her infant daughter sleep within arm’s reach in a bassinet in her room. Katie H. says she simply moved her son’s crib into her room when he got too wiggly to sleep in her bed.

By whatever means they do it, co-sleeping moms all mention an increased feeling of connectedness to their babies. Katie S. says co-sleeping strengthened the mother-child bond and provided comfort for her babies. Sarah S. agrees.  “It creates such a close bond and makes our children so much more secure in their world!” she says, adding that she thinks families grow closer when there's a “family bed.”

Babies
These Old Navy Infant Pieces Made Us Shout, "Oh, Baby!" as We Filled Our Carts
by Morgan Ashley Parker 13 hours ago