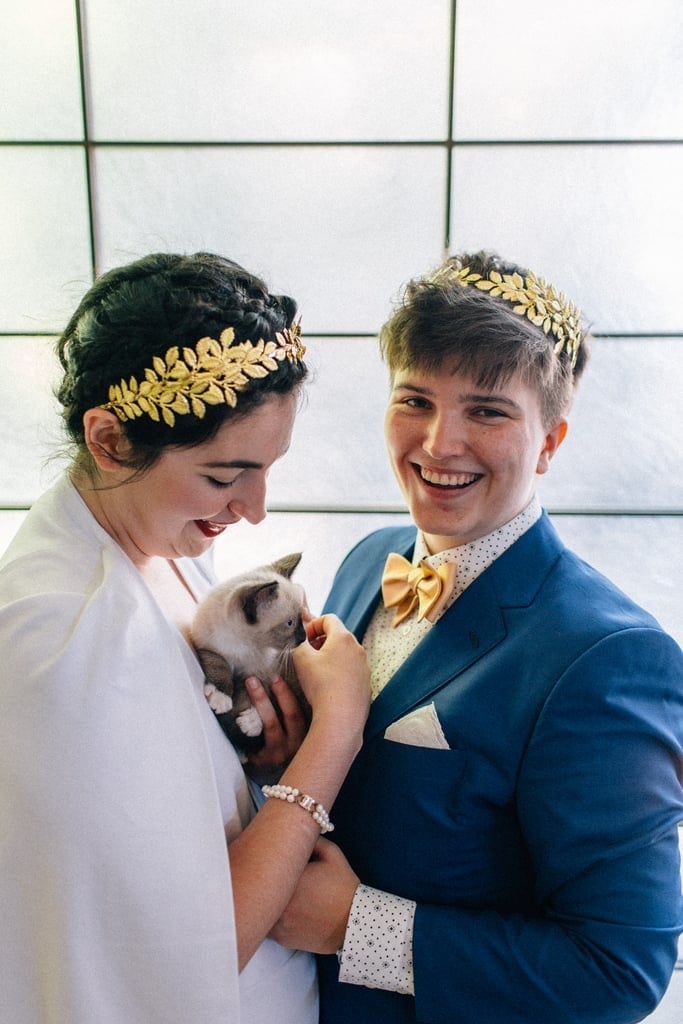 This Couple Had a "Kitten Hour" at Their Wedding, and Yes, It's a Cat Lady's HEAVEN

Colleen and Iz, a couple from Washington, knew they wanted something out-of-the-box for their wedding day. And while they were most definitely looking forward to the reception, the pair wanted to do something special for their guests once the ceremony was over. They put their heads together and came up with the greatest idea ever: a "kitten hour," where guests held and played with tiny kitties while the couple took photos. Colleen and Iz enlisted photographer Kendall Shea of F*ck Yeah Weddings to capture the adorable moments, and frankly, I really should've been invited.

"We wanted our guests to have something to do as they arrived [while] we took pictures with our families, so we planned a kitten hour," Colleen told POPSUGAR. "We did a cocktail hour with cocktails named after our cats for the reception, but the Quaker meeting house we used for the ceremony doesn't allow alcohol on premises. I wanted a wedding falcon, but Iz vetoed that, and so we compromised on kittens."

Related:
This Woman Takes the Most Breathtaking Photos of Her Cats Wearing Floral Crowns Like True Queens

Incorporating kittens into their special day was particularly important to the cat-loving couple. Although Colleen and Iz have two cats in their home, the cats' special needs prevented them from attending their owners' ceremony.

"We're HUGE cat people," stressed Colleen, who's also highly allergic to felines. "We adopted our two cats — Ladybird and Pangur Ban — as adults, and they have some special needs: Lady is blind, Pangur has IBS. But they're so special to us, and we wanted to do something to honor the love they've brought into our lives."

"It was hilarious to see our big, tough dads melting as they cuddled these tiny kittens . . . More than a few folks wanted to adopt right there on the spot, but the kittens were a little too young to be adopted out that day."

The next best thing? Coordinate with the Seattle Animal Shelter to arrange for rescue kitties to make an appearance instead.

"All we did was make a donation to the shelter, and we showed up the day of our wedding to a group of volunteers wrangling a litter of fuzzy little dudes," said Colleen. "They smelled AMAZING, like fresh little babies. We felt strongly about making sure we were supporting the Seattle Animal Shelter and not a breeder because we love our own rescue cats so much. They're funky, needy, and perfect for us."

Obviously, the kittens were a huge hit. How could they not be?

"The guests loved them," said Colleen. "So many people said it was their favorite part of the wedding, and they were a great conversation starter. It was hilarious to see our big, tough dads melting as the cuddled these tiny kittens. The atmosphere was definitely pretty mellow. More than a few folks wanted to adopt right there on the spot, but the kittens were a little too young to be adopted out that day."

Iz agreed, saying that she'd definitely consider doing it again some day. "I remember walking into the [venue] and being a little wound up with excitement. One of our friends saw me and handed me a kitten. I could feel my body immediately relax. I would totally do it again, maybe for the 10-year anniversary."

Keep reading to get a look at the photos and try not to double over with jealousy.

Related:
A Photographer Takes Pictures of Cats "High" on Catnip, and It'll Be Your New Favorite Thing
Previous Next Start Slideshow
PhotographyCatsWedding

Schitt's Creek
Pop the Champagne! Sarah Levy Is Married, and the Wedding Photos Are Simply the Best
by Chanel Vargas 1 week ago

Halloween
Lydia, Is That You? This Beetlejuice-Inspired Wedding Is Straight From the Afterlife
by Haley Lyndes 1 week ago