So my dad shows off my boyfriend and I at work 😭:’) pic.twitter.com/lQcQcRitxI

As soon as Louis, an 18-year-old from the Bay Area in California, started dating his boyfriend Christian in March, he knew he had his father Louis Sr.'s full support. So when his dad texted him on April 2 requesting a "pic of u and ur boy toy" to show his customers at the restaurant he works in, Louis wasn't exactly surprised. But as soon as Louis tweeted the sweet text exchange between him and his dad, it quickly went viral.

Louis told POPSUGAR that his dad totally had his back as soon as he came out to him.

"Since the day I told my dad I was gay, my dad has been nothing but supportive," he said. "My initial response was like 'Oh my god, who is he showing this to?' At first, I thought he was showing my aunt or grandma, but when I asked him who he showed the pictures to, he told me that he was showing his customers."

And apparently, it's not uncommon for Louis Sr. to share his life with the customers who swing by for a bite. "My dad is extremely close to his customers," said Louis. "My family owns a couple of restaurants where we live, and my dad's even gone to one of his customer's son's high school graduation ceremonies."

As you can imagine, Christian and Louis's dad hit it off early on. And the long-distance nature of their relationship definitely played a hand in how quickly they've gotten to know each other.

"Christian comes down from LA whenever he can," explained Louis. "And since he stays with me at home, he had to meet my parents SUPER early in the relationship, but he hit it off with the both of them! My dad takes us out to breakfast and lunch, and it's literally just the three of us. As long as I'm happy, he's happy."

Having his dad's seal of approval literally means the world to Louis. "It didn't surprise me, but it really made me feel good about myself. I'm so happy that my dad is proud of me and my boyfriend and is boasting about us nonstop!" 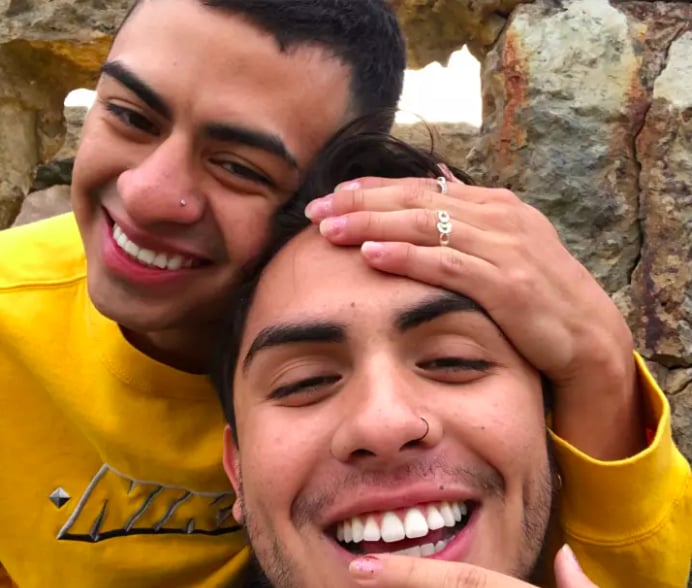 Jamie Foxx
3 Things to Know Before Queuing Up Netflix's Delightful Series Dad Stop Embarrassing Me! With Teens
by Murphy Moroney 23 hours ago

Good Morning America
Former Bachelor Colton Underwood Comes Out as Gay: "I've Ran From Myself For a Long Time"
by Kelsie Gibson 1 day ago