But There's Only 1 Baby

For some parents-to-be, one of the most exciting parts of pregnancy is finding out the gender of their baby surrounded by family and friends at a big pink-and-blue-themed party — but sometimes keeping the secret until the big reveal isn't as seamless as it could be. Whether the following moms and dads chose to reveal their little one's gender with balloons, a cake, or pepperoni pizzas, something went awry along the way, making for some pretty hilarious fails. Although we're sure most of these parents were frustrated, they were good sports, so we don't feel too guilty for laughing. 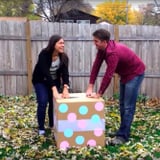 Pregnancy
Age Affects IVF Success Rates, but It's Not the Only Factor — Here's What to Know
by Devan McGuinness 5 days ago