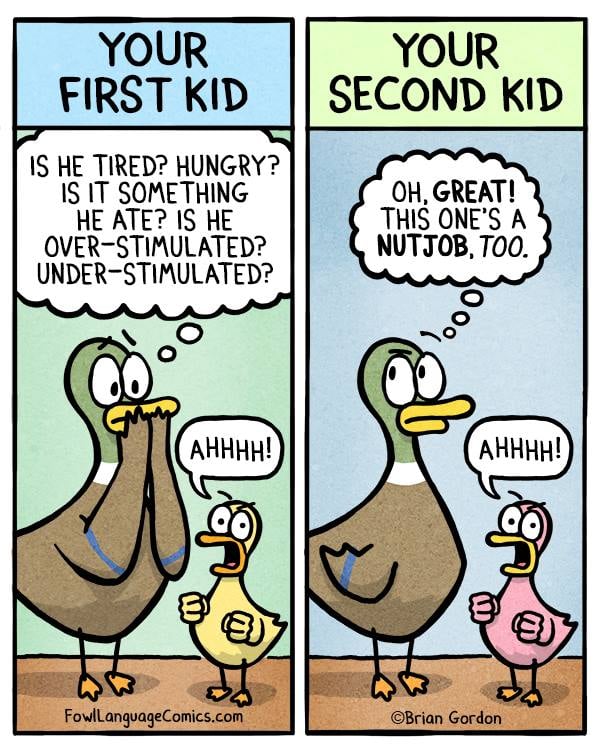 Brian Gordon — a cartoonist and dad of two — has been making fun of being a parent since he became one. In an attempt to keep himself sane and bond with other parents, he shamelessly started creating funny-because-it's-true parenting comics — and we can't stop laughing at them.

As soon as he brought his first child home from the hospital, Brian convinced himself that he was the worst parent ever, that is, until he started sharing his insecurities with other parents, who completely identified with his struggles. From there on, he decided to start documenting anything and everything about parenting — from being exhausted to being spit-up on for the hundredth time — through cartoons, and it's now his favorite thing to do.

"Being a parent can be incredibly frustrating, and I think sharing those frustrations and laughing with other parents is the best thing we can do to keep each other sane," Brian told us. And keeping us all sane, he is. His comics have been so successful in the parenting world that he was able to compile his comics into his first book, which should undoubtedly be centered among the pile of kid crap on every parent's coffee table.

Read through to see some of Brian's hilarious comics, buy his book, Fowl Language: Welcome to Parenting ($12), become a patron of his work to see behind-the-scenes strips, shop his designs at Society6 and Zazzle, and follow him on Facebook to see his new comics.

Related:
A Mom Created Comics to Show How Self-Isolation Is Going For Her Family, and Yep, Relatable!
Previous Next Start Slideshow
Parenting HumorFamily Self-Care