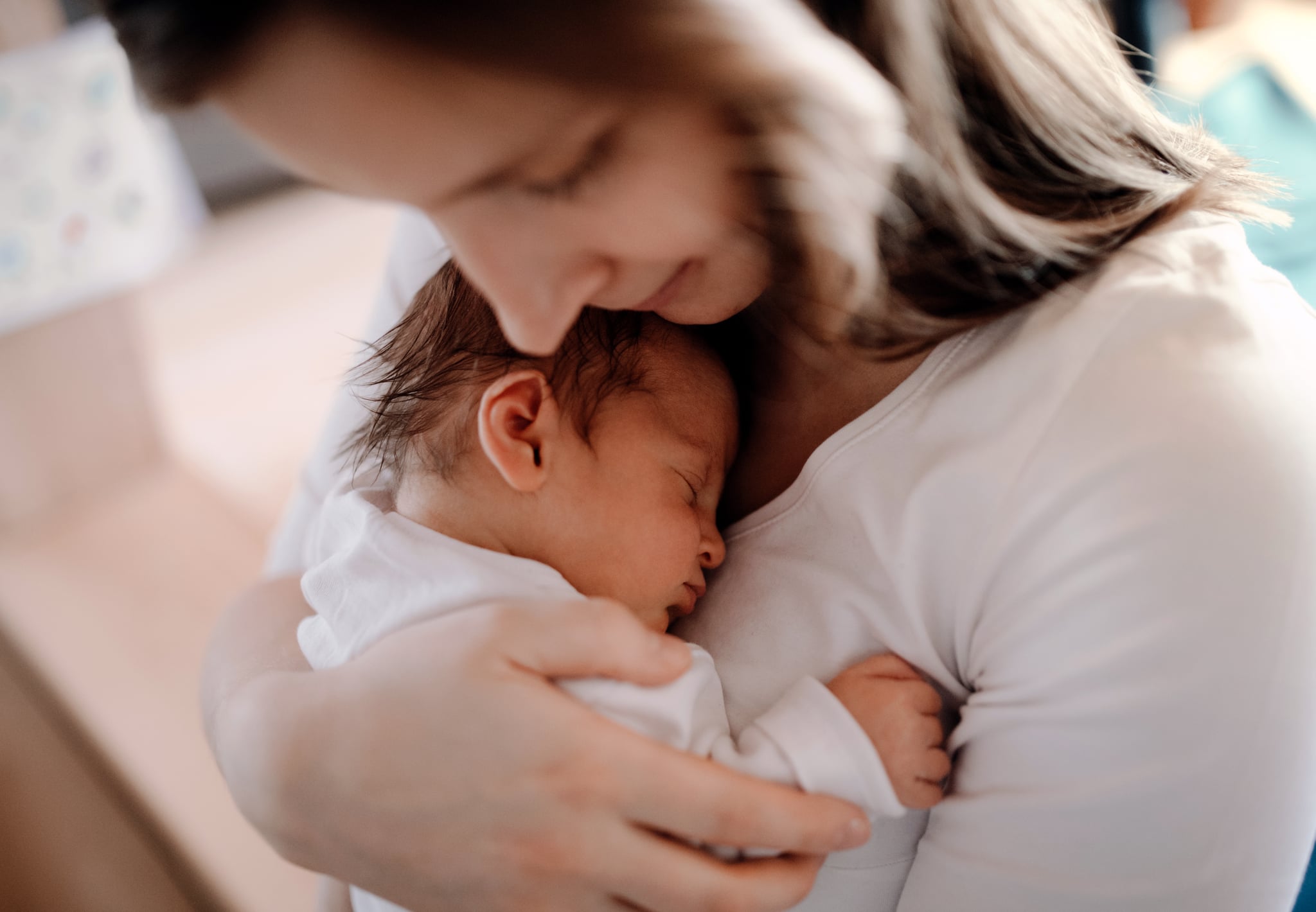 The expectation and reality of the birth of my daughter could not have been more different. While I'd read over and over again that having a birth plan was mostly silly, given how rarely things go as planned in childbirth, I still set about planning the kind of birth I hoped for.

A few months into my pregnancy, I had to face the reality that eventually my adorable baby bump would transform itself into a rocket ship that would deliver that baby. (That's a cute way of saying that she would be rocketing headfirst out of my vagina.) As a first-time mom, I was terrified. In the early days of being pregnant, I only wanted to read about weird pregnancy symptoms and cravings, but I was too scared to even open the chapters on labor and childbirth. I was in major denial that I couldn't just stay pregnant.

At that point, I was totally open to drugs during labor — I remember telling myself that I didn't have to be a hero, and I would accept an epidural if I wanted to.

To my surprise, the more I read about birth and labor, the more I realized I didn't want that. Or any painkillers. That's right; I wanted to try having a drug-free birth. I have nothing against drugs, and the epidural sounded quite nice, but I was worried about the domino effect of interventions. Specifically, I wanted to avoid being induced, scared that Pitocin (a drug that starts contractions) would make my contractions too strong to bear, and then I would want an epidural, and then I might not be able to feel enough to push, and then I would be facing my absolute worst childbirth fear: the dreaded C-section.

An emergency C-section seemed like the worst thing that could happen to my childbirth experience, hindering things that had specifically been in my birth plan. I wanted to have skin-to-skin contact immediately after birth — which seemed out of the question after a major surgery — and I planned on breastfeeding, which I thought would be totally derailed by a C-section, since your milk tends to come in later. And to be honest, I was still shell-shocked by the infamous 2008 documentary The Business of Being Born, Ricki Lake's examination of modern childbirth in America, which all but villainizes the hospital experience and what she deemed unnecessary medical interventions. The last thing I wanted was to feel traumatized by my birth experience.

I expected to be similarly fearful of giving birth in a hospital when I read the book Ina May's Guide to Childbirth. Ina May Gaskin is known as "the mother of modern midwifery," and her book extols the virtues of home birth — or more specifically, births on her compound, The Farm, in Summertown, TN. The book describes midwife-assisted births sans drugs that were all positive experiences for the mothers (she describes some women who, ahem, even have orgasms). I didn't need my experience to be that positive, but I was encouraged to learn that I didn't have to be afraid of childbirth.

The book has 100 or so pages of nothing but fabulous-sounding birth stories, because Gaskin believes that "positive stories shared by women who have had wonderful childbirth experiences are an irreplaceable way to transmit knowledge of a woman's true capacities in pregnancy and birth." She is a proponent of the mind/body connection, which I took to mean that I could control the pain I felt . . . to a certain extent. There would certainly be pain, but it was all how I reacted to it. Ultimately, Gaskin reminded me that childbirth is something our bodies were meant to do. It had me convinced: if millennia of women could give birth without drugs, so could I.

I started preparing for my drug-free birth by amassing lessons from Gaskin. She describes contractions as waves, or "rushes," conjuring a rhythmic flow that seemed far less scary than a crazy pain happening every five to seven minutes. She talks about images to conjure while in labor, kind of like going to your happy place, and making noises to help with the pain — mooing like a cow, to be specific. And reader, I was prepared to moo like a cow.

How to Prepare For a Scheduled C-Section

I was armed with these little tools, and I had one big card up my sleeve: my mom, who was training to be a doula. She was also learning techniques to lessen the pain of labor and contractions, and I was sure that her calming manner could also help me deal with the birth.

Then I came up with one overall mantra: I would have to let go.

I would have to let go and let my body do what it was built to do.

Armed with my mantra, I was ready. As my due date came and went, I wondered just when exactly I'd get to use my skills. When I was five days late, my doctor ordered a nonstress test to make sure the baby was still in good shape. I'd had a feeling that day that this might be it, and I had my packed hospital bag in the car with us. I was right: I got hooked up to the monitors and the ultrasound tech started doing her thing, and she said with a start, "Oh! Your baby's breech."

I could not have been more shocked — my daughter had been head-down (the optimal birth position) for weeks. She'd been ready. I'd been ready. And now her head was in the wrong position, and my head was scrambling. Though a specialist came in and tried to turn the baby to the correct position (called an ECV), it didn't work. The tech asked me if I knew what that meant. "Yes," I said. "I'll have to have a C-section." While we waited for my doctor to call, I let a few tears fall down my face. Shock had given way to fear and devastation.

Related:
My Birth Plan Didn't Go as Expected, and I'm Better For It

I talked to my doctor just after the failed ECV, and one of the first things she did was quell my C-section fears. I'd get skin-to-skin in the OR, just after the baby was quickly checked over, she assured me. I could try breastfeeding in the recovery room. And if I wanted to have a second baby, I could have a VBAC (vaginal birth after C-section). I felt instantly better but had one more request. I wanted to have the C-section that day. I couldn't handle waiting. Luckily, they were able to schedule my surgery for the same afternoon.

I had an hour before I had to go to triage to get prepared for the surgery. My husband, mom, and sister ate sandwiches in the cafeteria. I wasn't allowed to have any food or liquids before surgery, so I just watched them quietly. And I decided there, in the hospital cafeteria, that I'd have to let go.

My natural-birth mantra was back, though I'd be having what felt like the polar opposite of a natural birth. I'd wanted to go drug-free, and I was about to get hooked up to an IV and then have spinal anesthesia. I would get Pitocin after surgery. I'd need a lot of drugs to manage the pain afterward. But to get through it, I'd have to let go and let medical professionals handle my birth. I'd have to let go and accept that this was the safest way for my daughter to be born.

The mantra, like a meditation, flowed through me. I let it go. I breathed through every single step of the procedure, from the IV going into my arm to the anesthesiologist prepping my spine to the moment my daughter came out and I had to be patient and wait to see her. Letting it go and letting others take over was the strongest thing I could do.

Related:
I Hired a Postpartum Midwife, and It Changed Everything

As much as I was gunning for that natural birth experience, I don't mourn the vaginal delivery I didn't have. I feel extremely lucky that I didn't go into labor without knowing my baby was breech, which potentially would have meant a traumatic, emergency C-section instead of just an unplanned one. My surgery was managed well, my doctors were more than capable, and having that hour before prep gave me time to calm myself down.

My drive to have a drug-free birth was part of wanting to test myself, test whether I could take the pain, and test whether my mind could manage the pain I would have. Instead I was tested in another way; could I manage my fear to endure something scary, in a totally different way?

Weathering that mental challenge was enough proof to myself of my strength. It was my first real feat as a mother — putting the needs of my child before what I had wanted. I wouldn't change a thing about it.

Pregnancy
Age Affects IVF Success Rates, but It's Not the Only Factor — Here's What to Know
by Devan McGuinness 21 hours ago