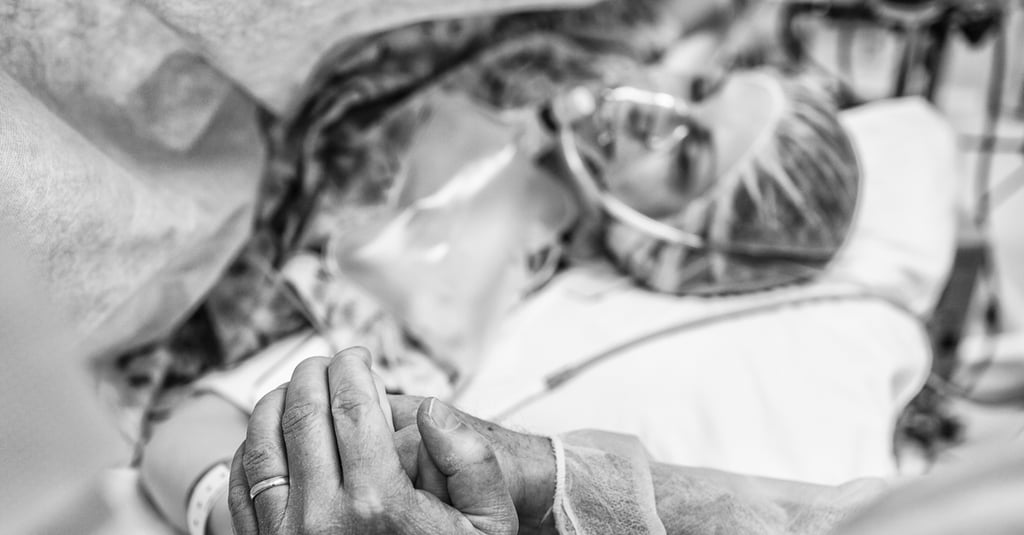 At 28, I had a completely uneventful first pregnancy with zero complications. My doctor visits were short and sweet and the only major complaint I had was heartburn. Naturally (or naively), I was expecting the same (epidural-aided) smooth sailing for my delivery. So, despite being well aware of the c-section rates, I was absolutely blindsided when after 21 hours of labor I ended up being rushed down the hallway to the OR for an emergency c-section. It was the scariest few minutes of my life.

It goes without saying that I am beyond thankful that it ended the way it did, with a healthy baby boy, but I could have never anticipated the flood of complicated emotions that followed. I would have loved to say that I didn't care how he got here and that it didn't matter because he was here. I mean, I did say that out loud a lot. But I didn't believe it at the time.

I wish I had felt totally OK with having a c-section like some people do, but I didn't.

In the days and weeks and months following my son's birth, I thought so much about how he got here. I thought about how it could have ended differently if a million things had happened differently. I replayed all the events in my mind. What if I let the doctor induce me when I was overdue instead of sticking it out? Would I have had a "normal birth" then? What if I told them no when they started me on Pitocin? Blame the Pitocin! But also, what if I didn't have a c-section? What if something terrible happened?

Of course, none of those scenarios matter. It was what it was, but that didn't change the overwhelming emotions that I carried with me as I navigated my first year as a mother.

I'm sure part of it was the "normal" hormonal rollercoaster that many women experience after giving birth, but on top of that extreme joy and weepiness, I also felt sadness, anger, and grief that lasted well beyond the two week "baby blues." I felt like while I was relishing in the bliss of welcoming my perfect baby boy, I was also mourning the loss of a "normal" delivery. I cried about his birth being traumatic and scary rather than exciting and beautiful like it's "supposed to be." I replayed the days and hours leading up to his birth in my mind, trying to pinpoint where things could have taken a different turn. And then I felt guilty for even thinking about it, since I was holding a perfectly healthy baby in my arms.

The cycle went on and on. Those rational thoughts were immediately followed by sadness that I didn't get that "moment" right when he was born that I had imagined, that I had visualized so many times in that last month of pregnancy. Instead I was left on an operating table calling out to anyone who would answer me wondering if my son was healthy, wondering what he looked like. I was so traumatized by the experience and so drugged up from the morphine that I declined to nurse him and didn't even hold him for the first time until the next day.

When I finally did hold him and look into his little eyes, it was magical, but it also broke my heart. I felt guilty for passing him off to be bottle-fed hours after his birth; I felt robbed that his grandparents all held him before I did.

Of course, I barely said any of this out loud to anyone besides my husband. To friends, I joked about still having a perfectly intact vagina (one of the very few perks of having c-section!). I shrugged off people's "I'm sorrys" and deflated "ohs" when they heard how he was born and acted like I didn't care, like it didn't matter.

I didn't believe it at the time, but it didn't matter. And it still doesn't. It took me almost a year to really accept that, to let the grief and sadness fade away and to convince myself that it was OK, and that I was OK with it. I finally believe it when I say that it doesn't matter how my son got here, because he's here. He's healthy and he's alive and so am I. It may not have been the experience I had envisioned or anticipated, but his birth was still the most special, important, life-changing day of my 30 years.

And even now, as I anticipate the birth of my second child, I've made peace with the fact that I may still not have the birth experience that I originally hoped for – and that's OK. Because now I know that with time, that single day will eventually be replaced by days and days of joy and milestones and memories that shine so much brighter than any amount of sadness ever could.

Workouts
I Prefer to Work Out in the Morning, and Here's Why You Should, Too
by Emilee Janitz 7 hours ago

Healthy Living
A Coach Taught Me How to Eat More Mindfully, and It's Helping Me Love Myself Again
by Adele Stewart 4 days ago