I get so irritated when people say there is a "respectful" way to breastfeed. It just makes no sense. With any other...

When it comes to breastfeeding in public, even though there are so many people who understand that the act is natural no matter if the mom is covering up or not, will always be a hot topic because of those who simply can't wrap their heads around the fact that it's a nonsexual act. Because the moderators at Breastfeeding Mama Talk seek to celebrate women who nurse — no matter how they choose to do so — they're taking another stab at getting their argument across by comparing nursing to other parenting acts.

"I get so irritated when people say there is a 'respectful' way to breastfeed. It just makes no sense," reads a post to Facebook. "With any other parenting decision you don't hear, 'Well , you can parent how you want, but just do it respectfully.'"

Sure, women are judged in public for not being able to control their toddler's tantrum, among other things, but breastfeeding in public is treated in a different, taboo way. The post continues, outlining why attaching the word "respect" to nursing isn't fair. 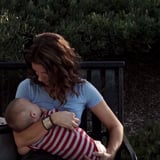 "This is how a mother respectfully nurses a baby," the post — which features a photo of a mom with her tank pulled down so her baby can eat — continues. "With dignity and confidence. I feel like the way someone chooses to nurse a child doesn't define the amount of respect they have for themselves and doesn't define who they are. We are all human beings and somehow we are divided by something as natural as breastfeeding. If you choose to cover up, that's awesome. If you don't, that's awesome too. The purpose of nursing isn't about who shows more boob or who doesn't. The purpose is to feed a child. And whether it's done covered, in a private place, or uncovered in the middle of a restaurant, does not define the amount of respect you have. The stigma needs to end. We are just trying to feed our babies."