Warning – the following is a soapbox moment. Generally speaking, I think parents are way too quick to place blame on...

If you haven't read an open letter penned by a mom on Facebook, we'd consider you one of the lucky ones. They're everywhere, and we've been over them for awhile now. But every so often, one actually hooks us. Instead of rolling our eyes at yet another mom desperate for "likes," we want to reach through the computer screen and high-five the parent behind the destined-for-viral-glory post.

Julie Holcombe is one such parent. This past week, she took to Facebook for a self-proclaimed "soapbox moment" and explained how a teacher confronted her twin 12-year-old sons and reprimanded them for doing something that has up until now been a classic childhood pastime.

They got in trouble for climbing a tree.

"I can think of few things better than knowing they are spending their time playing outside in the fresh air, taking advantage of the beautiful playground that nature can provide, getting exercise, using their imagination . . . all while climbing a tree," Holcombe wrote to the nameless school official. "Your rationale that they should not partake in this activity for fear that if they fall the school district will be sued is both sad and ridiculous."

What set Julie's open letter apart from the others, however, is that she took it one step further: she created a permission slip for her boys — a permission slip that will allow her kids, Ryan and Patrick, to be kids. 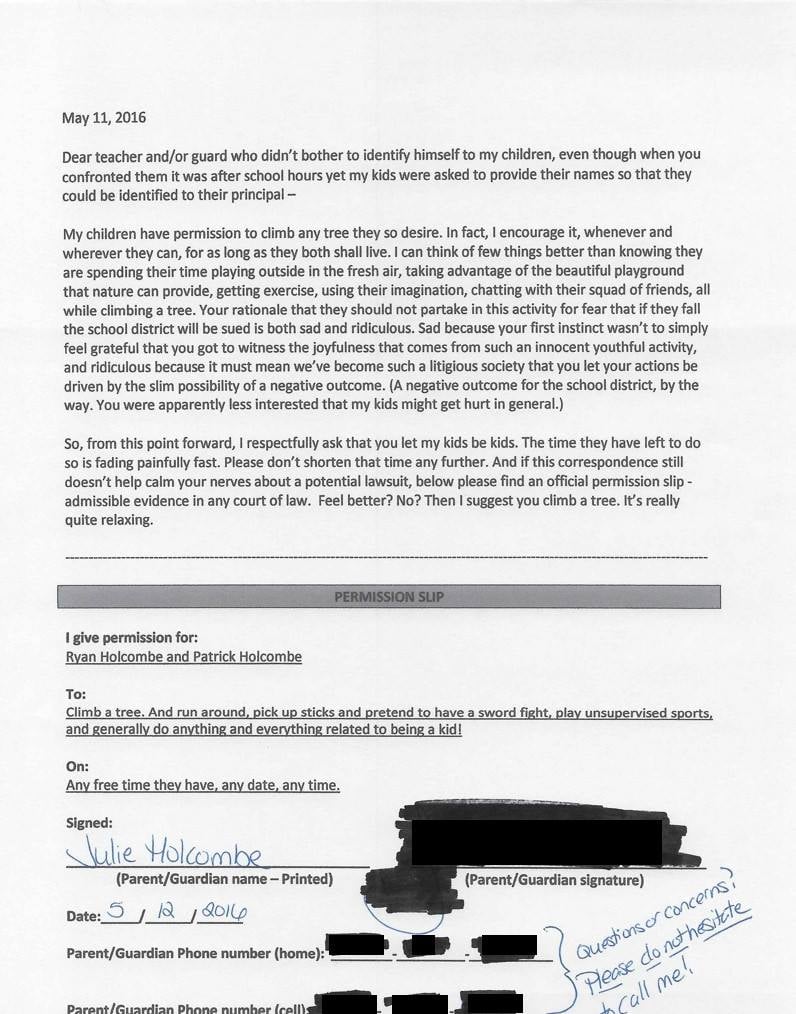 Her official-looking document, signed and dated by the ingenious mother, granted them the ability to:

Julie herself, however, admits that "parents are way too quick to place blame on teachers or school administrators for the shortcomings of their own children," but in this case, her message is spot on. And if her method doesn't calm the teacher's nerves of a potential lawsuit, she has one more piece of advice:

"I suggest you climb a tree," she wrote. "It's really quite relaxing."