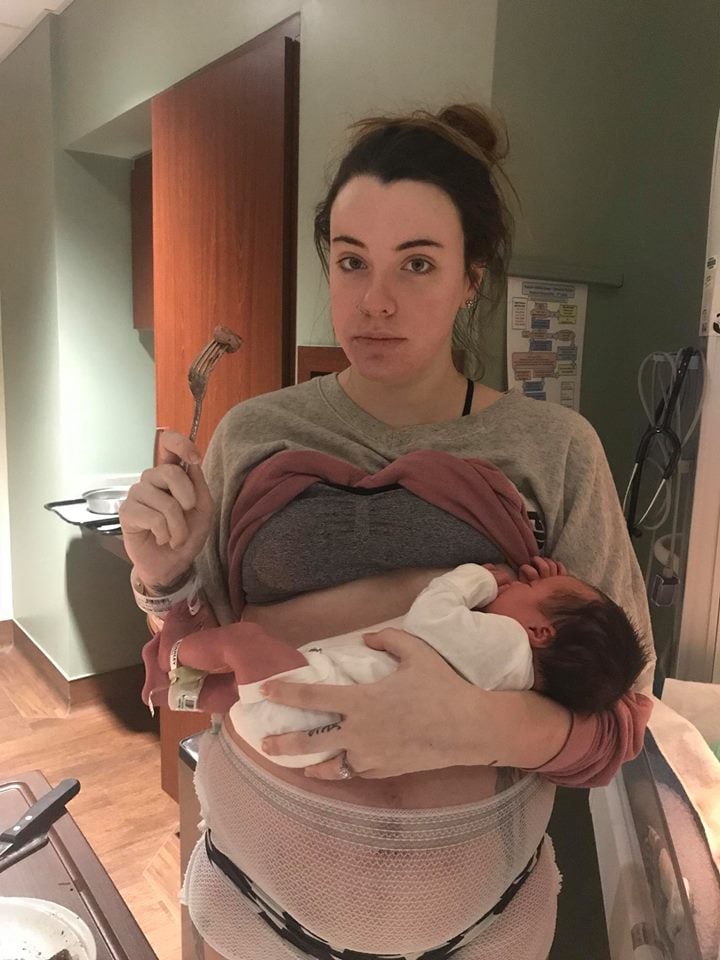 Autumn Benjamin, a mom to a sweet baby girl named Layla, isn't afraid to talk about the not-so-glamorous parts of childbirth. In a now-viral Facebook post, she explained that navigating the first few days of motherhood can be especially overwhelming, especially from a physical standpoint. But despite the pain, Autumn is proud of how much her body has accomplished — and she thinks other women should be, too.

"I've debated on this post for a while but I've decided that I'd show the hard parts of the aftermath of giving birth, and the ultimate sacrifice that mothers make from day one," she wrote. "Kevin snapped this of me. This was two days after I gave birth to Layla. Eating my 'nice meal' provided by the hospital. An overcooked steak and sides. I was in new territory. Learning to breastfeed this little human being that I just brought into the world. Wearing these big mesh panties, still sporting a pregnant belly . . . no one told me your belly doesn't go down immediately. No one told me I'd be bleeding out."

Related:
This Gorgeous Postpartum Bodies Series Will Have You Applauding the Moms Who Bared All

Although the physical part of having a baby is certainly taxing, the new mom also explained that birth can take a toll on your mental state:

No one told me that I would spend hours crying and full of emotion. I remember just laying there in the hospital bed crying. I was crying because my baby girl was finally here.. FINALLY! But wait . . .that means she isn't protected inside of me anymore. And that's a scary feeling. At what point, I think Kevin was at a loss. I realized that when I was being held by him in the hospital's shower and I was just crying uncontrollably. It's all a blur but I do remember saying 'she's not safe inside of me anymore' and that was a really hard thing to work through.

Another subject Autumn wasn't afraid to broach? Tearing during labor:

"I was also in so much pain," she said. "No one tells you that typically with a 'quick delivery' comes a bad rip. I ripped all the way up and down, and also side to side. The weeks following I couldn't walk. I couldn't use the bathroom. I wore these big Depends diapers. I never thought I would be normal again. Kevin had to help me do EVERYTHING from pee, to walk up stairs."

"Don't ever discredit a mother. You don't know the half."

As all moms know, the sacrifice definitely doesn't stop there — there are still plenty of feedings and sleepless nights on top of waiting for your body to heal.

"Being a mom is the ultimate sacrifice," she said. "You give up your body for nine months to grow this little baby. You go through labor and delivery. You go through the emotions that come with childbirth. You let go of all shame as you walk around your house in diapers and ask your SO to spray warm water on your rip while you pee to avoid that burn. You spend tireless hours latching your baby and feeding your baby to establish and keep up your milk supply because you want to breastfeed so. Damn. Bad. You remain patient through leaps, growth spurts, and cluster feeding."

And while there's no denying your life completely changes once you enter motherhood, Autumn doesn't mind putting parts of her life on hold for Layla.

"But most importantly, moms give up who they were before they were a mother," she said. "Most moms give up a lot of their hobbies, dreams, and plans. Moms put their lives on hold so their babies can live out theirs. We deal with so many emotions that we internalize — just so we can be mothers to our babies. Don't ever discredit a mother. You don't know the half. I used to be Autumn. Fun loving, crazy, outgoing Autumn. But now I'm Layla's mama. And I'm okay with that."

Halsey
Halsey Responds to Hurtful Comments About Their Health: "Let Me Live"
by Chanel Vargas 5 days ago