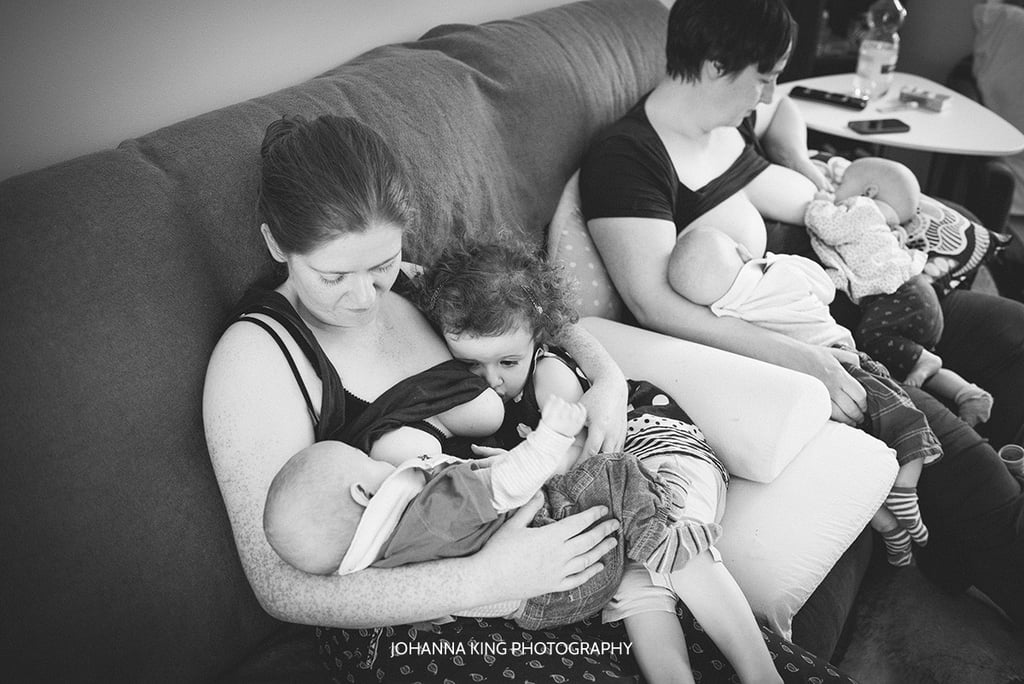 When Cliona and Sue were in a phase of life with four kids under 3, they were doing all they could to tag team on their family's personal breastfeeding journey. The wives, who live in Dublin, Ireland, had a 2-year-old toddler named Aoife who was still breastfeeding with Cliona when the triplets Sue was carrying arrived at 31 weeks. With the babies in the NICU and unable to latch, a difficult, round-the-clock pumping schedule for Sue began, and once the triplets began to take to breastfeeding with Sue, Cliona wanted to help however she could.

In a post to Facebook on the Breastfeeding Twins and Triplets UK Page, Cliona described those early days in the couple's breastfeeding journey. "Once Sue had breastfeeding established, I started to help out with feeds," she wrote. "It was a bit earlier than planned, but after consultation with a lactation consultant we were happy to go ahead with it. Sue still does the bulk of the feeds — and with three babies that means constant rotations — but I help out when I can."

The mom continued, touching on how amazing of an experience it has been to be able to feed all four children through breastfeeding, and how they make it all work.

I help out when all three want to be fed at once, or if I have to bring one baby to a hospital appointment it saves me having to bring a bottle. When our little boy had to spend three nights in hospital, Sue stayed in with him and I ended up tandem feeding his three sisters at home at night, which was a bit of a juggling act! Sue has also now nursed our toddler a few times when she (the toddler!) was feeling curious about it.

The sight of all four children being simultaneously fed is not an uncommon one in our house! I feel so lucky to be able to connect with all my children in this way, and of course with triplets it's handy to have an extra set of boobs!! My wife does 99 percent of the hard work, but I feel so grateful that I am able to contribute that last 1 percent.

Thanks to photographer Johanna King, this busy family's story is being spread around even more, as the beautiful photos she took of them tandem feeding their children started to go viral six months after she shared them on her photography blog. In the post featuring the family, the women shared why this session meant so much to them.

"We have very little time to reflect on our very quickly created and slightly mad, but wonderful, family," they said. "Breastfeeding and carrying our children in slings can be demanding, but allows us to spend lots of time with them and ensures they all get lots of cuddles. We want to be able to look back and remember how crazy it all was, but also that there were quiet moments in there too, and to capture some of the beauty in the madness."

Scroll through to see Johanna's stunning photos of Cliona, Sue, Aoife, and the triplets.