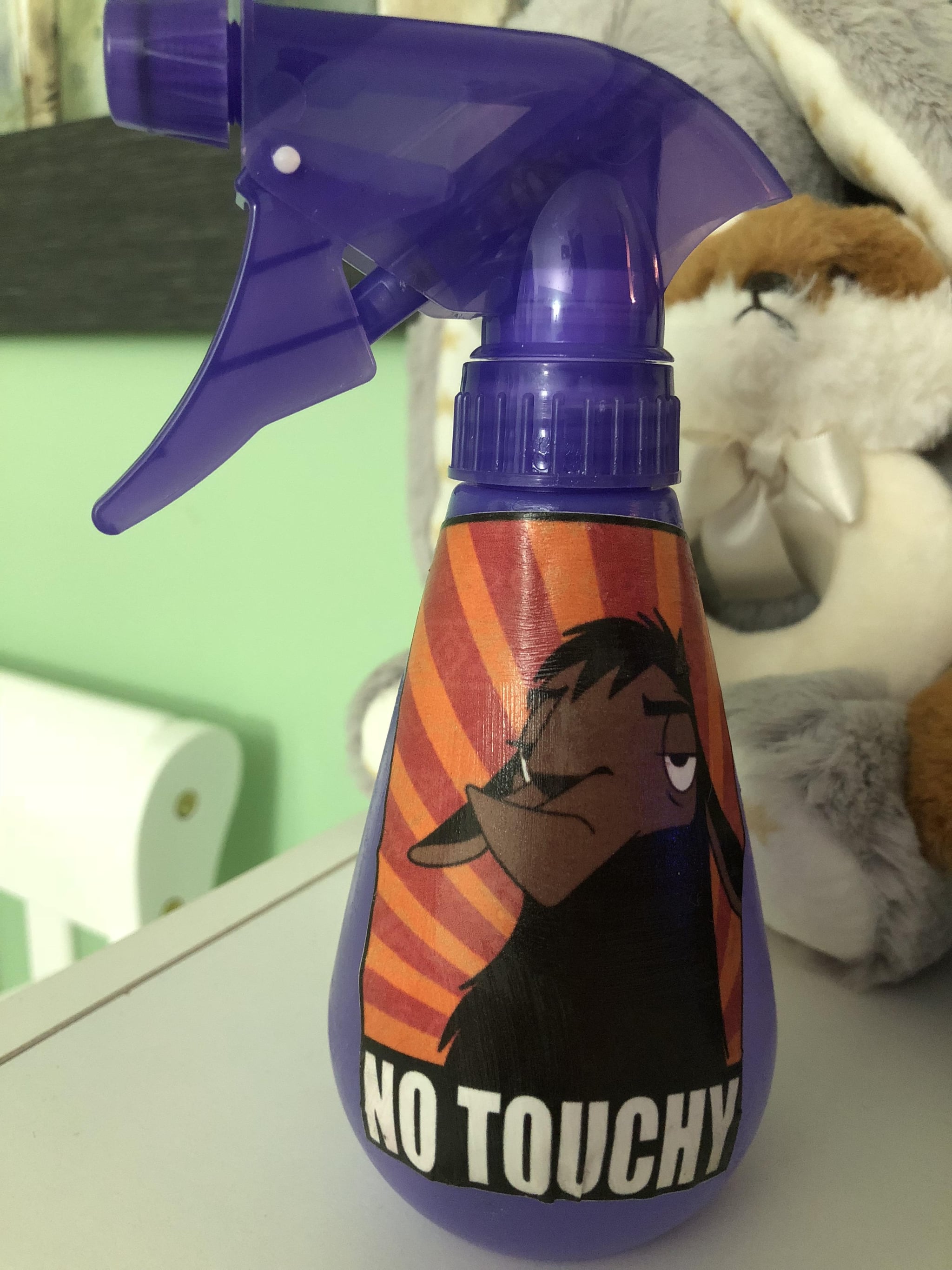 After Samantha Reid commented to her husband about how many people touch her pregnant belly without so much as a warning, she got the ultimate gift from him: a "No Touchy!" spray bottle that's equal parts hilarious and practical. She told POPSUGAR how the idea of an Emperor's New Groove bottle came about, and we wish we'd thought of this hack a long time ago.

"It's been an inside joke between my husband and me since early in the pregnancy. From the first announcement, friends and strangers on pregnancy forums warned that pregnancy caused people to go crazy around you," she joked. "You would get not only curious glances or stares everywhere you went, but people would surprise you out of nowhere by touching your belly to feel the baby move."

Things took a more serious turn after Samantha got into an argument with one of her family members about the matter at hand:

"I only started showing a month or two ago, but the first family visitor we had immediately grabbed for my belly and caught me completely off-guard. I told her that I wasn't comfortable with anyone touching just yet since the baby wasn't moving regularly, but she waved it off and said because we are related, it is her right to touch my belly whenever she wanted. It led to a small argument. I argued that some people are OK with or do enjoy being touched and others aren't, so it is super important to ask the pregnant person before you make grabby-hands at them. My relative argued that anyone — even strangers — who grab for a belly are just excited and so caught up in the miracle that they don't think, and it is silly for a pregnant person to be offended by or worry about goodwill."

Although the soon-to-be mama understands that her family is excited for her, she believes that asking an expecting mom is a good idea. After all, you never know what they're experiencing.

"I doubt I have the guts to actually spray a stranger in the face if they touch me without asking, but I am excited for my family reunion next month."

"I went through miscarriage and fertility issues before this pregnancy, so I am sympathetic, but I never once reached out to grab a stranger," she said. "If I had the urge, I thought it was common decency to at least ask before touching. Pregnancy isn't easy and you don't always feel great, so it makes sense to ask to be sure someone isn't going to feel more nauseous from you poking at their stomach, or that they aren't in a hurry to finish errands so they can go home and sleep. Regardless, being pregnant doesn't remove someone's bodily autonomy and right to say 'no, thank you.'"

Feeling hands on her belly when she least expects it can also get tricky for Samantha for another reason: she's introverted on a good day.

"I'm a major introvert with social anxiety and the thought of anyone coming up to me and touching my belly just horrified me — let alone people doing it without permission! I also turned out to have an anterior placenta, which basically means there's a thick, spongy barrier between my baby and the outside of my belly that prevents regular movement from being felt, and it makes being touched even weirder."

Lo and behold, about a week after the argument broke out, Samantha came home from work to the clever present featuring her favorite character, Kuzco, and his signature line carefully stuck to the side of a plastic spray bottle. And obviously, she loved it.

"My husband had spent longer than he cared to admit making it perfect and was obviously quite proud," she said. "I thought it was hilarious and thoughtful, and definitely plan to use it. Unfortunately, it's a bit too big for my purse, so I may have to make a smaller 'travel-sized' version."

As far as actually using it on people? Well, Samantha has some reservations.

"I doubt I have the guts to actually spray a stranger in the face if they touch me without asking, but I am excited for my family reunion next month," she said. "My family has heard us joking about the spray bottle and is aware of my disinterest in being touched, but if one of them tries anything anyway, you can bet they'll get a faceful of water! It will be funny to everyone there, but I hope it will also make them stop to think about asking before touching people in the future."