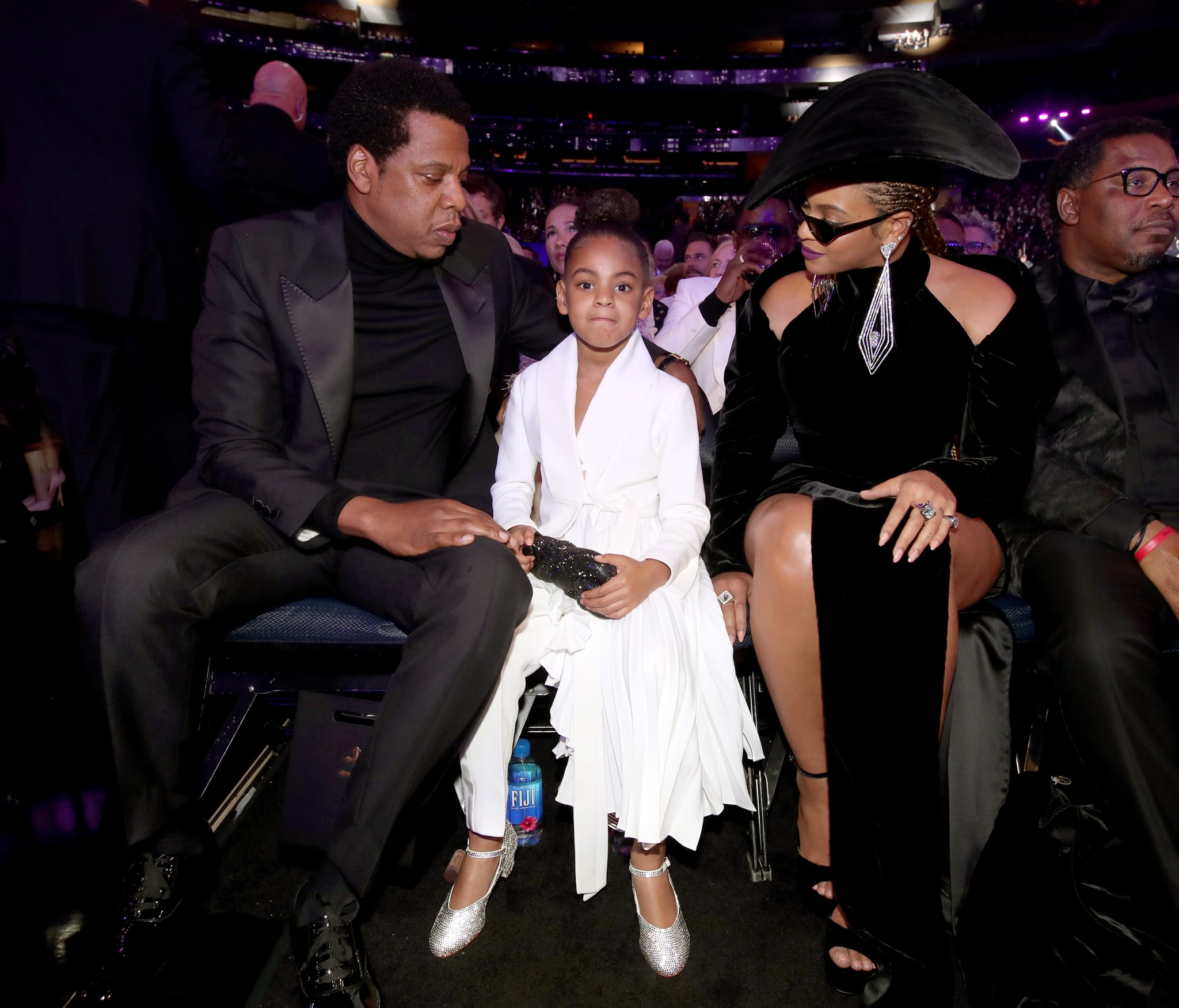 There were a number of memorable performances and moments from the 2018 Grammy Awards, but during Camila Cabello's speech about Dreamers prior to her introducing U2 is when the most memorable of them all (according to social media) went down. Although Cabello's speech was great, I'm actually referring to when the camera panned to Beyoncé, JAY-Z, and their 6-year-old daughter, Blue Ivy, and caught an admittedly hilarious family moment.

In the middle of Cabello's speech, Bey and JAY began clapping along with a few others in the room, and Blue could be seen lifting her hand up and bringing it down to inform her parents that it was not yet time to clap. Or at least that's what it looked like — no one can be truly sure.

But in the comments section of a People video sharing the funny three-second moment, the internet was quick to claim things they felt they were sure of: that the child is entitled and spoiled and that she was "bossing around her parents."

Although some came to the young girl's defense, too many people were quick to judge the famous family based on the short, seemingly innocent clip. But let's be honest: how many times have you witnessed — or experienced yourself — a child express themselves just like Blue? A child who doesn't like that their parent is talking might put their hand over their mouth. Another child in Blue's exact position might have smacked their mom's hand or elbowed her in the side to get her to stop clapping. Although I'm not making an excuse for using physical contact, these are typical behaviors children sometimes exhibit — not every child, no, but many children.

When asked his thoughts on the situation, Dr. Frank J. Sileo, a licensed psychologist and author of Did You Hear? A Story about Gossip, agreed that Blue Ivy is simply, at her core, just a typical 6-year-old girl learning to express herself — and that it's not anyone's place to judge her and her family based on this interaction alone.

"We saw this one incident at the Grammys, and to make an assumption about someone's parenting skills or this child is really not very fair," Dr. Sileo told POPSUGAR. "We don't know that Beyoncé or JAY-Z didn't later say to her that that wasn't appropriate."

And if they did, they'd likely be inclined to do so privately, rather than in public. Or they could have said something to her a second after the camera jumped to another famous audience member. Or, maybe, just maybe, Beyoncé didn't feel the need to say anything to her child at all, because what she did didn't warrant discipline.

"It actually looks like she's being respectful to her mother and father."

"It actually looks like she's being respectful to her mother and father," Dr. Sileo said. "If you look at the GIF, she's not slapping her mother's hand down, you don't see her pouting or yelling — it looks like she's kind of saying, 'Not now,' or something of that nature, which is a prosocial behavior. Kids are always learning, and we should be teaching them social skills. She's recognizing in that moment, 'Hey, this woman is still talking, don't clap.' But we can't see that or hear what was said. It would be different if Blue Ivy slapped or elbowed her mother, or if you could see that she was visibly yelling at her mom — then it would be a different story in a way. But even then, she would be experimenting with boundaries."

Like most 6-year-olds, Blue Ivy is in the stage of development in which she is learning to express herself and to communicate her needs and wants appropriately. "Kids at that age are testing boundaries and limits and what they can get away with and what's OK. They may be modeling their parents," Dr. Sileo said. "But that's very common among kids that age to experiment with testing limits and boundaries; then it's up to the parents to react accordingly."

For argument's sake, let's say that Beyoncé was upset by Blue's behavior on that night and that Blue's seemingly innocent action isn't the type of thing her parents condone. It's still, then, not up to the world to decide how Beyoncé and JAY-Z should raise their child, especially as her actions hurt absolutely no one. But Dr. Sileo has a theory as to why so many people, who themselves would likely be outraged if their child was perceived as spoiled for a one-off display of a similar type of behavior, tend to judge others almost automatically.

"I think that we as a culture like to pounce on celebrities and look for any kind of flaws," he said. "We kind of like the drama — we're drawn to it as a result of reality TV and other forums. We like to see people with status misbehave because maybe it makes us feel better about ourselves and our own kids as opposed to thinking that maybe Beyoncé struggles with parenting like everybody else does. Seeing a celebrity kid who acts out or gets bored kind of humanizes them, but again, we as a culture like to jump on those behaviors."

Just as the world was quick to shame and take out their political frustrations on Barron Trump simply for being the son of Donald Trump, this type of shaming of famous children simply because a person feels a certain way about their famous parent, or celebrities in general, is unfair. And Dr. Sileo agrees.

People make these assumptions that Blue Ivy is spoiled and entitled, but those are their own projections and their own thoughts. They're stereotyping celebrities and pigeon-holing kids and celebrities into this kind of box that may or may not exist. Yes, she lives a very charmed life, I am sure. How many kids get to go to the Grammys? She has two very famous parents. That doesn't mean that that incident was a result of poor parenting or a result of her being spoiled. I wasn't there — again, we can't take one incident and overgeneralize that and make assumptions about it. I think that's unfair to both parties — to the child and the parent.

So please, before you so quickly judge a child or their parents for an action you were not present for and know nothing about, consider your own children and how you would feel if the roles were reversed. If Beyoncé or any other parent on this planet decided that your child was spoiled, entitled, or bossy simply because they saw three seconds of your life on the playground, I'm sure you'd be extremely quick to defend your kid and parenting skills. And whatever your subsequent actions would be in the face of behavior akin to Blue's is your choice, just as Beyoncé's response to her daughter, whatever it may have been, was her choice.

Little Kids
Nick Jr. Is Hosting a Shark Week For Kids – And It Obviously Features Baby Shark!
by Murphy Moroney 2 days ago