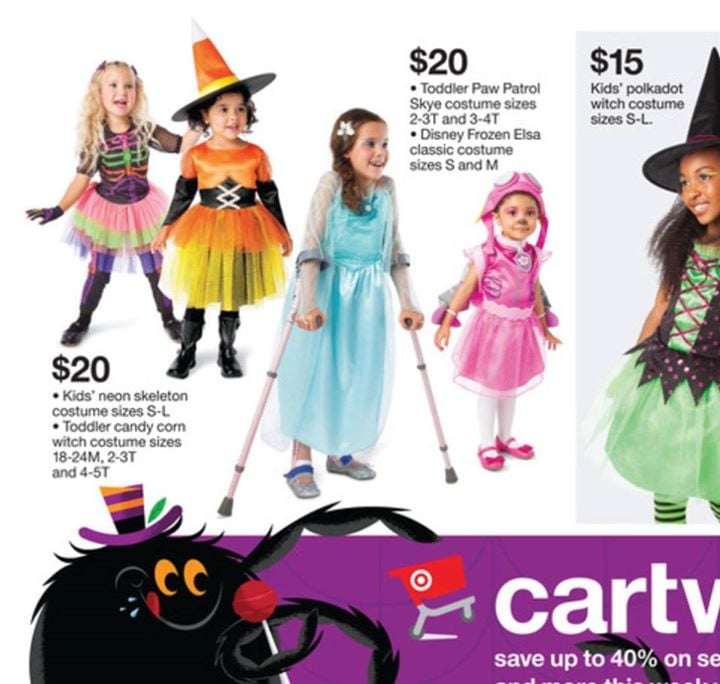 In recent years, Halloween has had plenty of parents on high alert for kids' costumes that are inappropriate, whether they are promoting gender stereotypes or are overtly sexual. So when one mom decided to pen an open letter to Target after seeing an ad for kids' Halloween costumes, we assumed the retailer had done something wrong.

On the contrary, the ad — which featured a girl with braces and forearm crutches dressed as Frozen's Elsa — was a major step in the right direction when it comes to the types of child models featured in advertising campaigns.

Jen Spickenagel Kroll, the mother of a child with a disability, couldn't help but snap a photo of the ad and share it on Facebook. Her message is as inspiring as the ad itself:

Thank you for including a child with braces and arm crutches into your advertising campaign! And as Elsa, no less! My daughter (with arm crutches and prosthetic legs) is going to FLIP when she sees this! Including children with special needs into advertising makes them less of a spectacle to the general public when they venture out into the real world. Normalizing disabilities in children is PRICELESS.

Little Kids
This 5-Year-Old Gave Her Mom the Sweetest Compliment, and Her Reaction Will Melt Your Heart
by Yerin Kim 3 days ago