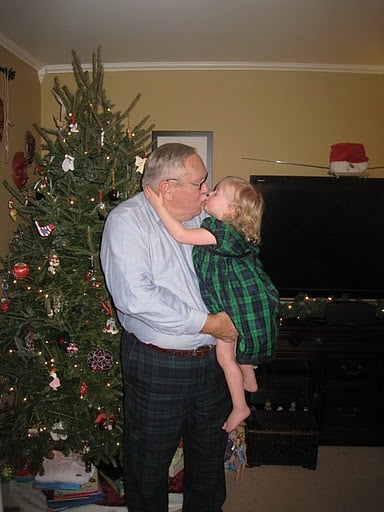 After I lost my dad, I knew the holiday season would be tough. People told me what to expect the first year — I knew it would be difficult not having him present for all of our family holiday traditions. While I couldn't truly prepare myself for what that first year was like, after his September death, I readied myself for a very emotional holiday season.

It was hard. My family and I leaned on each other a lot, shared memories of him, and told stories about Thanksgivings and Christmases past with smiles on our faces and tears in our eyes. My brothers and I made it through the first Christmas of our whole lives without our dad. It wasn't easy, but we came out in the new year breathing a sigh of relief that we could put those dreaded first holidays without him behind us. The next year, though? I was a mess. No one told me that when the "firsts" were done, the "nexts" were just as difficult.

Related:
I Have a Hard Time Being Happy Around the Holidays Because They Remind Me of Loss

The anger, sadness, and anxiety are all things I expected to feel the first year. I was foolish to think I was through the mess of emotions that go along with losing a parent.

But the first year, I was able to look back and remember where I was the year before; seeing my dad light up on Christmas morning as I shared the news of my second pregnancy with him. I remember picking up the phone and calling him the previous Thanksgiving when I was struggling to remember exactly how much milk to add to his famous corn recipe. But the second year, I didn't have those "last year at this time" memories with him, because now "last year at this time," he wasn't here. Now, he's not here again, and the weight of the fact that he won't ever be again is hitting me harder than I expected.

I cried at least three times while prepping for his favorite holiday meal on Thanksgiving. I never put much thought into actually memorizing the recipes because I called him every year and asked for measuring and timing confirmations and advice. This year, I got angry when I couldn't call and ask him what to do next with the stuffing. The anger, sadness, and anxiety are all things I expected to feel the first year. I was foolish to think I was through the mess of emotions that go along with losing a parent.

After experiencing multiple breakdowns and moments of really missing him over Thanksgiving, I hope the constant ache in my heart doesn't shock me so much on Christmas. It's agonizing living without him through traditions and memories he's always been a part of, while still trying to be present to create new memories with my young family. There's a constant pull threatening to take me down to a place of heavy sadness — a place I fear that if I fully reach, I won't be able to leave. I know it's time to create a new normal no matter how hard it is, and making this new normal doesn't mean forgetting him. It means honoring him and keeping his memory alive however I can, including remembering how to make those recipes. It means telling stories about him to his grandson who he was so excited for yet was only alive to see for three months. It means dancing around the kitchen to his favorite silly Christmas song. It's filling in the holes created by his loss with love created by the family he left behind. Instead of focusing on what he won't be here for, like seeing his grandkids open their Christmas presents or sit on Santa's lap, I need to focus on being present for those things myself.

These feelings of anger, sadness, and denial that he's really gone are proving to me that the pain won't ever go away. It may dull as time goes on, but I'm thankful for the reminder that this is hard even when it's not fresh. It reminds me that the reason it hurts so bad is because he was so special. It reminds me to reach out to those I thought may have "dealt" with their loss because it's been years since they experienced it. Because after 10 days, 10 months, or 10 years, my dad still won't be here, and that's something you never fully heal from.

This holiday season, I'm choosing to focus on the good memories we had with him, just as I did last year and the year before, but also giving myself some grace that I shouldn't expect myself to be over it just because it's not the first time I'm experiencing things without him. What I'm choosing to take away from this grief process is that I feel encouraged to connect with those in my life who have also lost someone, because while it's not a fun club to be part of, there is a sense of camaraderie from all having different variations of the same wound. And if we can be there for one another, we should be.