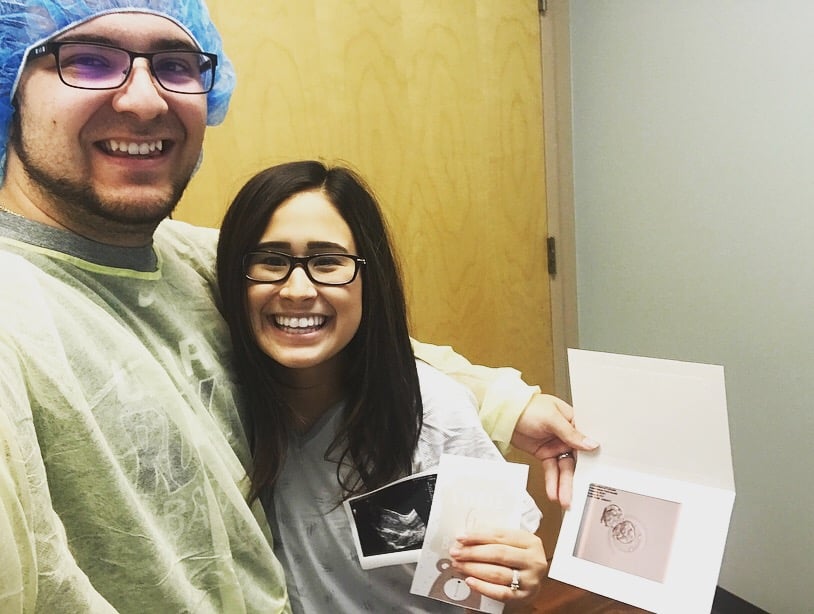 Lindsay Hanzlik, a soon-to-be mom of twin boys, is beyond grateful that after years of trying to get pregnant, she's finally expecting after going through IVF. At 32 weeks along, she can't wait to be a mom, but she admits that being pregnant is pretty damn hard, especially when you're having twins. In an Instagram post, Lindsay explained why going through IVF successfully is only half the battle.

"I've been feeling like I shouldn't share how hard [pregnancy] has been because I know how much worse the other end of it is," she wrote. "But the truth is that pregnancy isn't easy. I never asked for it to be or thought it would be. I don't in any way wish I wasn't experiencing all of this, but it doesn't mean it isn't uncomfortable at times."

Like many women who struggle with infertility issues, Lindsay admits the road to parenthood has been long and emotionally taxing for her and her partner.

"We started 'not not trying' as soon as we got married in 2014," she told POPSUGAR. "We just assumed it would happen quickly. Then a few months turned into a year and we realized things weren't going as easily as planned. I'd been struggling with health issues for some time, and again, we thought that fixing those problems would somehow immediately give us a baby. After going to specialists in-state and cross-country, we still weren't successful in trying to conceive naturally."

The pair finally decided to go the IVF route in 2016. Even though they were over-the-moon when they learned twin boys were on the horizon, pregnancy was no cake walk for Lindsay.

"Physically, my pregnancy has been hard. I wouldn't say harder than [everyone else's] but still hard. Having two little ones growing is very demanding of the body, especially since I'm pretty small to begin with," she said, adding that, "I'd say the worst has been morning sickness. I've had it through my entire pregnancy, though the frequency has certainly slowed down. It's just draining to be sick and puking all the time, but, still, I wouldn't wish it away either."

Related:
How to Talk to a Friend Going Through IVF

Even though carrying around two babies is tough work, Lindsay wouldn't change her predicament for the world.

"I would do this 100,000 more times if I had to. We are so blessed with these little ones and I wouldn't trade anything for being able to carry them. I'm just so anxious to meet them already! We've been waiting on you two. Please behave for just a while longer!"

Fertility
Do IVF Injections Make You Hungry? Here's What Experts Want You to Know
by Sydni Ellis 4 days ago

Pregnancy
From Geriatric Pregnancy to Incompetent Cervix, Outdated Women's Medical Terms Are Getting an Update
by Kate Schweitzer 4 days ago