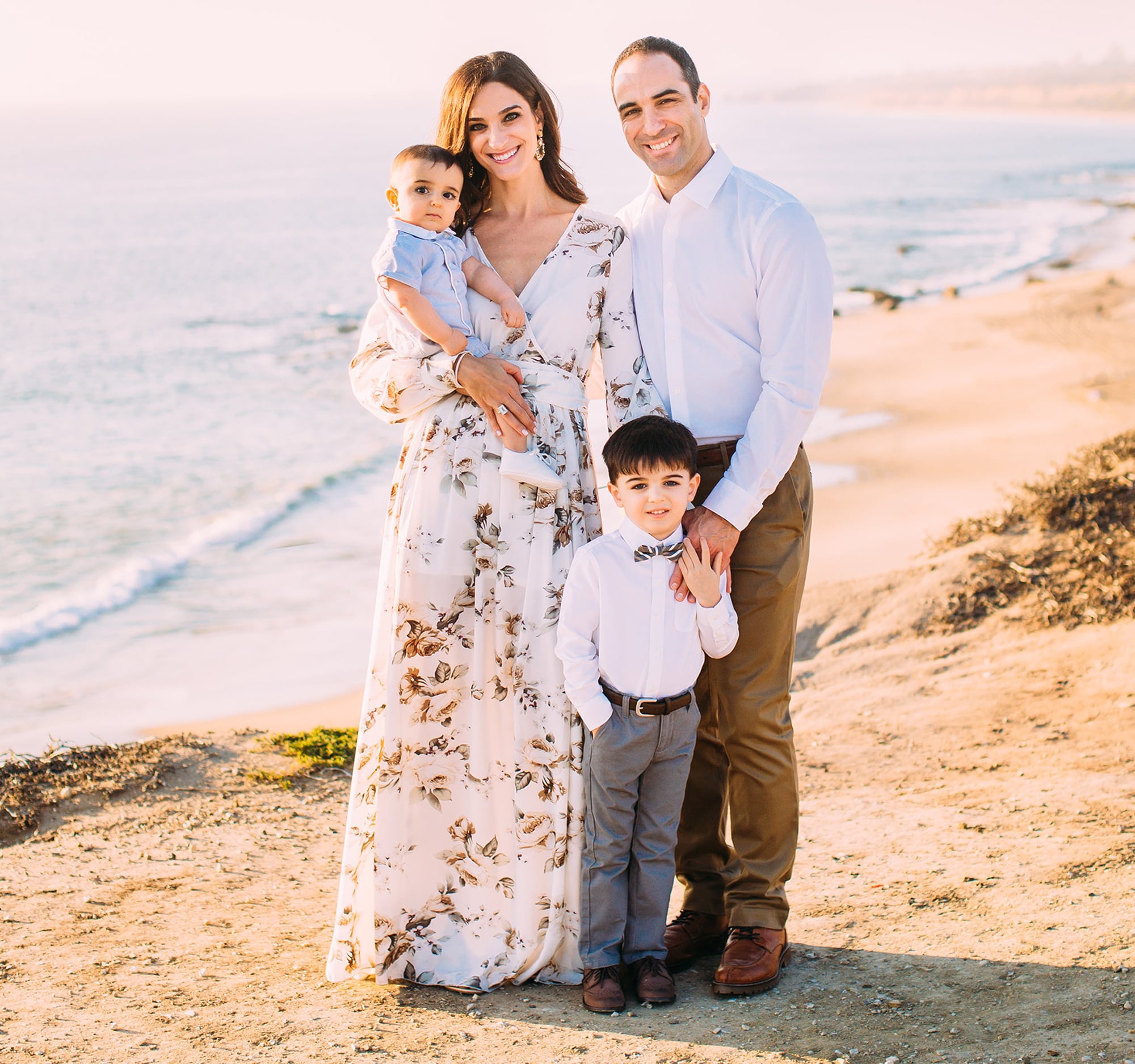 When Armené Kapamajian learned she would have to shelter-in-place with her family amid the coronavirus outbreak, she was more prepared than most parents.

"Home isolation is a mind game, but it's easier than you think."

Less than two years ago, she was quarantined with her newborn baby — unable to leave their small hospital room — for three months before then embarking on a year-long home isolation. Her week-old son was born with a rare disorder called Severe Combined Immunodeficiency (SCID), which meant that any outside germs could be deadly for his nonfunctioning immune system. As uncommon as her situation was at the time, the lengths she went to in order to keep her family safe aren't so foreign to many of us now.

In fact, her experience – one in which, at the time, no one could empathize with, nevermind comprehend – is now the reality for millions of Americans, and she has some helpful advice for her fellow parents as they embark on their "new normal."

"Home isolation is a mind game," she told POPSUGAR. "But it's easier than you think."

Stop Sanitizing Everything in Your Home

"People can stop freaking out about sanitizing everything in their home over and over again," she said. "If your entire family is staying home, and after two weeks no one has shown any signs of contamination, you are in the clear."

She explained that once your home has been decontaminated, it is "in essence a safe bubble" and that she feels at ease that touching a surface in your own home won't make you sick.

Of course, the caveat is that whenever you leave your home — for a grocery run or a neighborhood walk — and return, you have to quite literally leave your germs at the door.

"Designate an entrance to your home as a decontamination area, and no shoes or outside clothing go beyond that point," she said. "Wash your hands and wipe the door handle. Throw your clothing into the hamper and take a full shower to get rid of airborne germs you may have come into contact with."

She admitted that it's "a lot of work and will feel really tedious really fast," but it's essential to maintaining your "clean bubble" — with no germs getting on furniture or other family members.

Be More Patient and Kind Than You Normally Would

When Armené first experienced life in quarantine, she had no emotional outlet. Now, we've got relatable memes being shared across social media and virtual Zoom happy hours to help us blow off steam. Even with these coping mechanisms in place, tensions will naturally run high.

"The important thing to keep in mind is everyone in your family is making this sacrifice, and everyone is upset and emotional," she said. "You will not last long if you are short and not patient to your own family members or friends."

Whenever someone in her home bothered her, she tried to "give it a minute" before reacting. "You set the tone for your environment," she said. And because our environment is highly limited these days, she suggested approaching "the situation or the person with more kindness that you'd show on a typical day."

Related:
My Husband and I Instituted "Parent Timeouts" and, Damn, We Needed This

Set a Literal Soundtrack For Your Days

If you like a quiet home, great, but for many, the silence of self-isolation can be deafening. Armené found that adding a soundtrack to her day – and to her kids homeschooling time – helped set the tone and improve her mood.

"If you want to be uplifted, play peppy music," she said. "If you are feeling anxious, some classical piano music always helped me."

Get Creative With How You Use Your Living Space

Pre-isolation, many families used their main living space for just a few hours a day. Now, it seems those rooms are where everything happens, for better — or more likely — for worse.

"When I was stuck in a hospital room for three months, going from my chair to my desk was the highlight of my day," she said. "You need to change your scenery."

She suggested moving around in your full living space by using different rooms for different purposes. "Try not to just plant yourself on the couch all day," she said. "If you have another room, go to another room for another activity."

For example, if your kids do crafts at the dining table, maybe they do math homework in the playroom or at a table in their bedrooms. If you work in your bedroom, try to break for lunch and eat it at the kitchen counter. "Read books or take a meal in your backyard, if you have one," she suggested. "If not, crack a window and sit by it to feel some fresh air."

Turn Off the News as Much as Possible

When Armené was in her 15-month isolation, she found that social media was triggering — posts about friends carrying on with their lives or complaining about inconsequential problems was hard for her.

This time around, she's noticed that the 24-hour news cycle is taking its toll on her mental health. Particularly with kids in the home, she's found it vital to keep the ongoing coronavirus news at bay. "Don't leave the news on all day," she said. "Limit yourself and minimize the time you are doing so throughout the day."

She designates two hours in the evening that she'll turn on the TV or scroll through articles on her phone to stay up to date on current events.

Stick to Supershort Activities With Kids

For Armené, who is a former teacher, she maintained that the simpler the activity, the better — particularly for younger children. "Take short breaks often," she said. If you start to see that your kid is getting antsy or not being a good listener, she suggested pausing for an energy burst.

"Do jumping jacks or take a quick parade around the house or play a game of Simon Says," she suggested, noting the last one can be done from your couch with a cup of coffee in hand. She also recommended seizing the opportunity to do homeschool tasks when they are focused. "Read books during meals," she said. When she does this with her two boys, she'll encourage them to take a bite before she turns the page.

Keep Daily Habits, but Realize You'll Break Them, Too

For Armené, it helped to change out of pajamas every day. Simply putting on leggings or "nicer sweatpants" just helped her feel clean, which in turn boosted her mood. She felt the same about brushing on minimal makeup and wearing jewelry. "It just makes me happy," she said. She also tried to exercise every day.

Still, that doesn't mean she had a 100-percent success rate. She has learned not to feel guilty about her lazier days.

"Vegging out is just as important as days filled with productivity," she said. "There are days when I don't change out of my PJs till the afternoon or not at all, and that makes me happy, too — and that's OK!"

Related:
It's OK If You Do Nothing "Extra" With This Time at Home With Your Kids

For Armené, putting her situation into perspective was what kept her from getting too depressed the first time around. She read books about tragic historical events, for instance, to remind herself how lucky she was despite her family's health issues. She's using similar mental tools during this current, indefinite self-isolation period. For starters, she is looking at it "like one long weekend, or the week between Christmas and New Year's when you just take it easy and do the things you want to do."

"Jump on this opportunity. It hopefully won't ever be presented to you again."

Sure, that might be easy for a self-isolation veteran – with nearly 70 weeks under her belt – to say, but when Armené first endured quarantine, she didn't have access to even a fraction of the resources available to us now.

"There are so many awesome free things being offered online right now that I wish I had when we were stuck inside the first time," she said. "You could learn anything you wanted right now from virtual videos and classes."

Like many of us, Armené recalled her typical day-to-day routine, which involved "rushing everywhere, to school, to practices, and, living in Los Angeles, nothing is close, so we spend hours in the car each day," she said. "I found myself feeling guilty that I didn't get to just stay home and play, do activities without feeling the pressure to be doing a hundred other things or keeping with sleep schedules so kids aren't cranky at school. So when we went back into isolation, it's been nice to go back to simpler times — movie nights, hours in our backyard, later bedtimes and wake-ups, crafts."

As for some very relatable advice, she said: "Jump on this opportunity. It hopefully won't ever be presented to you again."

Home Workouts
Motivated Mulan or Sleeping Aurora — Which Disney Princess Working Out Are You?
by Samantha Brodsky 1 hour ago 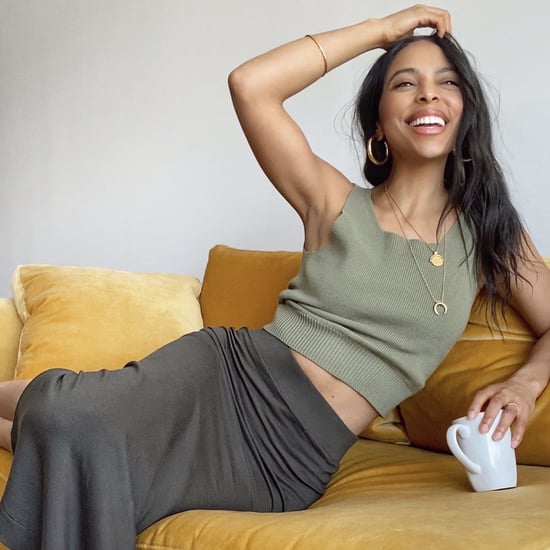 Selena Gomez
Selena Gomez Has the Most Amazing Nap Dress, and I Think About It All the Time
by Sarah Wasilak 4 days ago