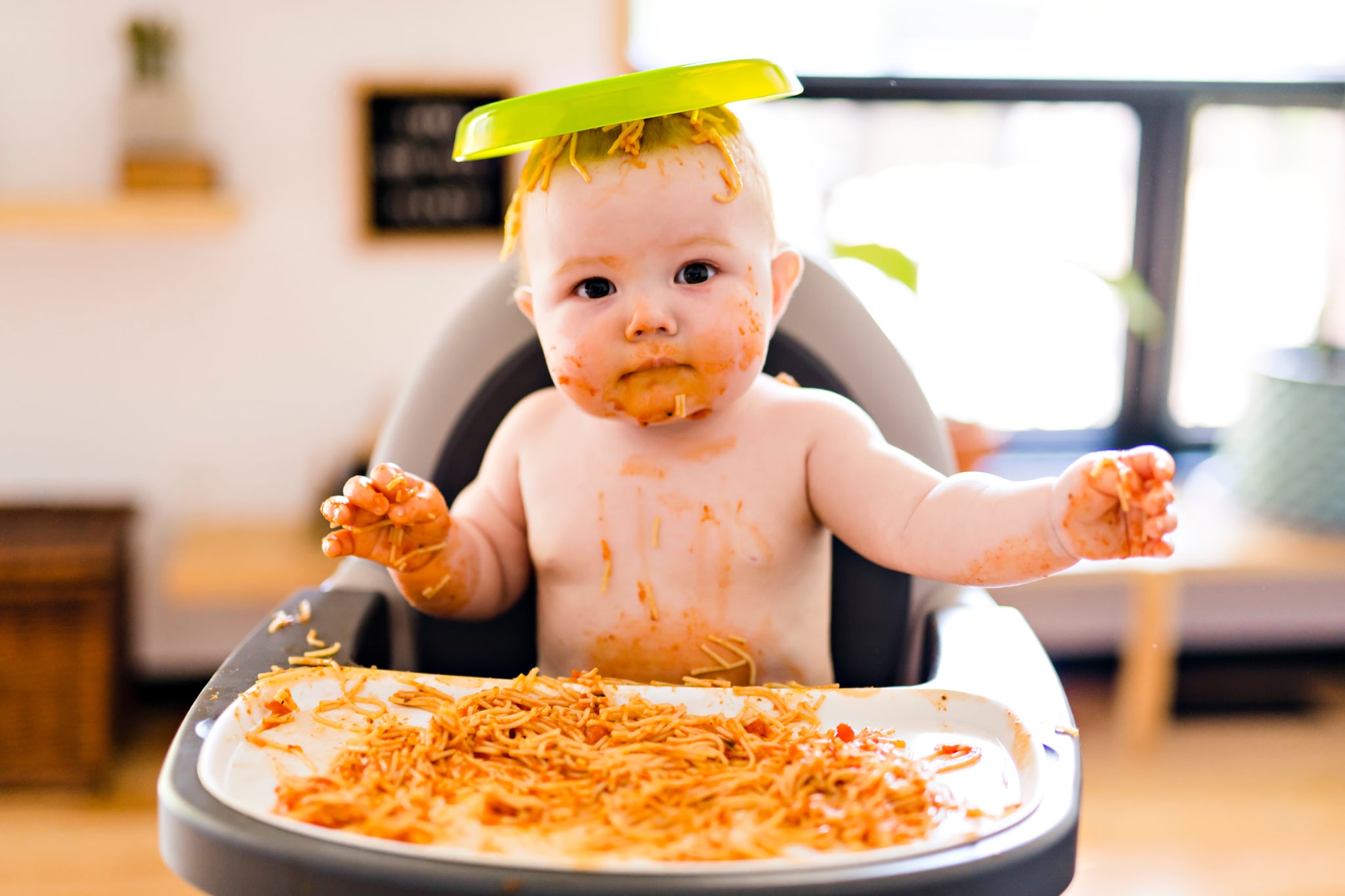 Weaning your baby onto solid foods after months of an all-liquid milk diet can feel scary, and many parents have immediate worries about their babies choking while eating. Which is valid, as food accounts for over 50 percent of choking episodes, according to the American Academy of Pediatrics (AAP). Although you can begin to introduce solid foods to your baby at around 6 months, children under 4 are most at risk of choking while eating due to how their food is prepared and the types and sizes of foods they're given.

If you are feeling anxious about your child starting on solid foods or just want to learn more about choking in infants and toddlers, keep reading for the difference between choking and gagging — and what to do in either scenario — as well as a list of some foods that could pose a choking hazard for babies ages 6 to 12 months old.

The Differences Between a Baby Choking and Gagging

Whether you're feeding your baby purees or cooked veggies and other baby-led weaning-approved soft foods, choking or gagging can occur because your baby is still learning about their reflexes, swallowing mechanisms, and how to properly chew their food. The difference is simple: choking occurs when food is blocking the airway; gagging occurs when the gag reflex is tripped by a food.

How to Tell If Your Baby Is Gagging

Signs that your baby might be gagging include them making a retching noise, their tongue might be out, or they're coughing. They may also spit up the food that's in their mouth. This is all OK and totally normal for a baby still working out how to eat solid foods of different textures. Although it can be alarming to hear your child gag, this is the body's natural way of preventing choking, so it's best to let them try to work the food out themselves by allowing them to cough or gag without intervening. If they stop coughing or gagging and still appear to be struggling to get the food out of their throat, they may be choking.

How to Tell If Your Baby Is Choking

The first thing to ask yourself when you are afraid your baby might be choking is, "Are they making noise?" Because choking occurs when the windpipe is blocked, your child wouldn't be able to cry, speak, or cough if they were choking, rather, they'd either be fully silent or be making high-pitched sounds while struggling to breathe with food lodged in their throat. Additionally, their face could begin to turn red or purple, and their lips could go blue if they're not getting oxygen.

What to Do If Your Baby Is Choking

The most important thing to do is to not panic — stay calm for both yourself and your child so you can properly manage the situation. First, look into their mouth and see if it's possible to locate what's blocking their airway and if you can hook it out with a finger. If that's not possible, the American Red Cross and the Mayo Clinic recommend the "five-and-five" approach to first-aid.

First, give five back blows with the heel of one hand between the infant's shoulder blades as they lie stomach-down across your lap. Then, give five chest thrusts while supporting their head and neck as they lie on their back. "Place two or three fingers in the center of the infant's chest just below the nipple line and compress the breastbone about 1½ inches," the Red Cross's instructions read.

For a child older than 1, place an arm across their chest while kneeling down behind them, bend them over at the waist so their upper body is parallel with the ground, and give five back blows between their shoulder blades with one hand. Then, "give 5 abdominal thrusts" (aka the Heimlich maneuver). "Alternate between 5 blows and 5 thrusts until the blockage is dislodged," or the child can cry or breathe.

Next steps include performing the tongue-jaw lift or CPR* if your child becomes unconscious or doesn't have a pulse. Learn more about the Heimlich, tongue-jaw lift, and CPR on the AAP's website.

*It's recommended that all parents become trained and certified in first-aid, and you can contact your local American Red Cross or American Heart Association to find out where classes like these are held in your area.