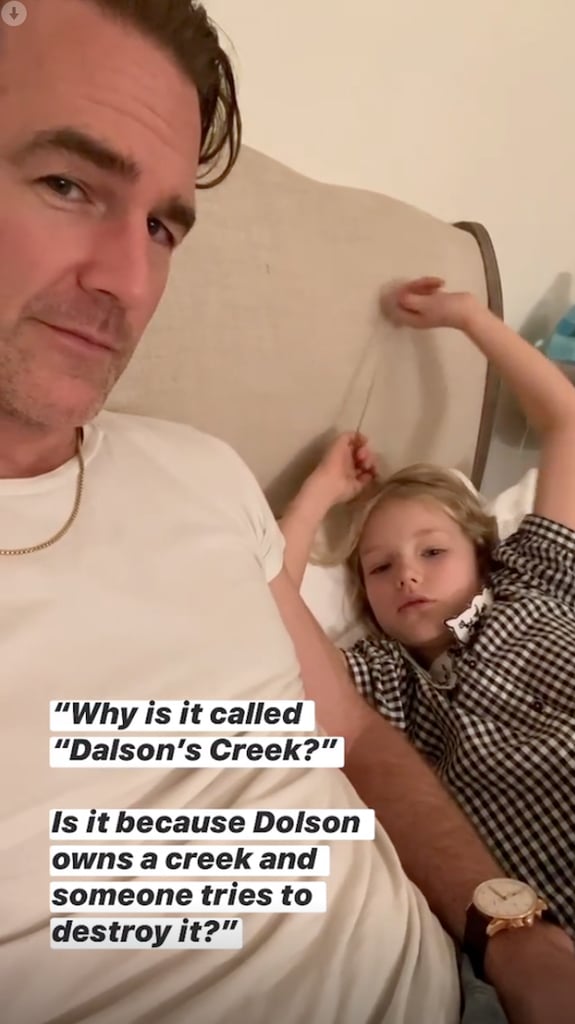 James Van Der Beek, aka Dawson Leery from Dawson's Creek, is a father of five, and it was only a matter of time before one of his kids got curious about his past as the dreamy boy next door. In a video posted on his Instagram Stories, James discusses the teen drama with his 9-year-old daughter, Olivia. "Why is it called Dalson's Creek?" Olivia asks. "Is it because Dalson owns a creek and someone tries to destroy it?"

Like many dads might do, James takes the opportunity to have a little fun with his daughter's question. "Exactly — he owns a creek, and then somebody's trying to blow it up, and so he has to use kung fu and ninja moves to try to prevent that from happening," James explains, throwing in more than a few fictional details along the way.

"I can imagine you doing that," Olivia says.

Poking fun at the moody series, James adds: "That's what it was. It was not about me whining and crying and being annoying on a creek. It definitely was not that." While Olivia seemed to buy his story a few seconds earlier, the face she makes at her dad after this sarcastic addition is proof that even she knows what's up.

In addition to the adorable Olivia, James and his wife, Kimberly Brook, have four other children, including 7-year-old Joshua, 6-year-old Annabel, 3-year-old Emilia, and 19-month-old Gwendolyn. See James break down the plot of the classic '90s show for Olivia ahead.

Nostalgia
From "Kenan & Kel" to "Sabrina the Teenage Witch," Coolio's Most Iconic TV Roles
by Chanel Vargas 21 hours ago