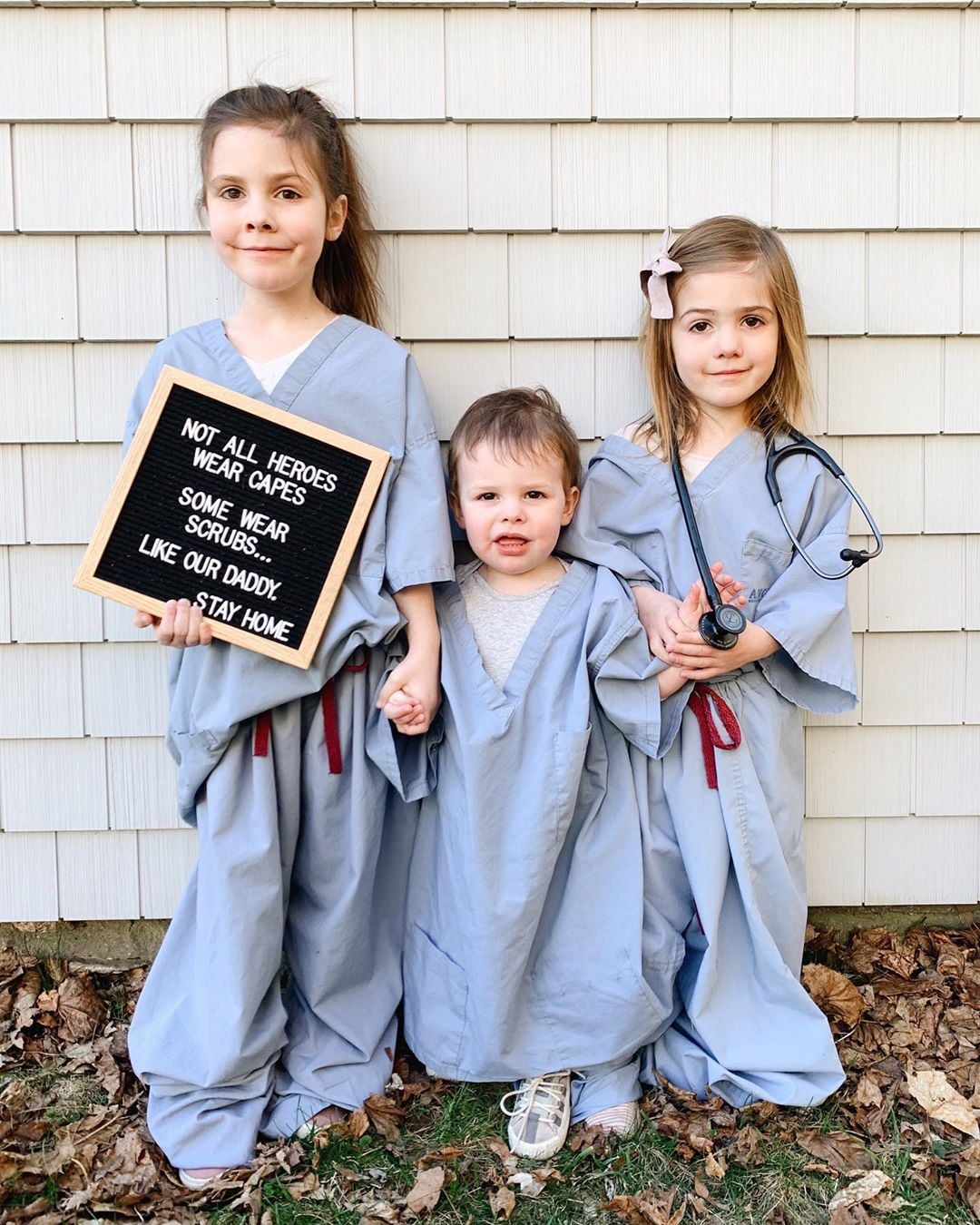 Stephanie Scurlock recently shared a powerful photo on Instagram of her three children — Ryan, 6, Rory, 4, and Griffin, 18 months — dressed in her husband Josh's scrubs to emphasize the importance of social distancing. Because of Josh's role as a chief general surgery resident at a hospital in Massachusetts, Stephanie knows how stressful being a parent on the front lines can be.

"It's pretty difficult to convey all of my feelings during this time," she wrote. "So many thoughts. So many worries. But, I think this photo sums up the gist of it. To anyone on the healthcare front lines, you are our heroes and I am praying for your safety, both physically and mentally."

Related:
A Mom Shares What It Was Like Giving Birth in an NYC Hospital Amid the COVID-19 Outbreak

Although Stephanie admitted that Josh has been handling the situation like a pro by remaining "calm and collected" through the COVID-19 outbreak, she acknowledged that the situation has put a lot of stress on her family.

"There have been a lot of polarizing points of view regarding social distancing," she told POPSUGAR. "I've read statements saying: 'Healthcare workers signed up for this. They knew the risks when they became a doctor or a nurse.' I also hear arguments against social distancing along the lines of, 'I'm young and healthy, I'll be fine.' As the wife of a physician, this is upsetting on a myriad of levels, but what I hoped to convey through my photo of the kids was that it isn't just about the healthcare workers, it's not just about you."

"My husband may have 'signed up' to be a doctor, but my kids sure didn't."

Stephanie continued, noting that the pandemic truly affects society as a whole, whether you work in a hospital or not. "Other people's lives are directly affected by your choices, good or bad," she said. "My husband may have 'signed up' to be a doctor, but my kids sure didn't. They are exposed to whatever he brings home with him whether they like it or not."

Related:
Everything Parents Need to Know Before Cutting Their Kids' Hair During Self-Isolation

Obviously, as a parent, Stephanie said keeping her kids safe is a top priority. However, Josh has nowhere else to stay, which complicates the situation. "With all the stress that Josh — along with every other healthcare worker — already has to deal with on a daily basis because of COVID-19, he also has to worry about bringing the virus home and exposing his family to it," Stephanie said. "If people won't stay home for healthcare workers or the elderly, maybe they'll stay home for their children."

Ultimately, Stephanie wants to give essential workers the credit they deserve. "Every person out there doing their job in the public right now — whether it's the grocery store cashier, the truck driver, the postal worker, the nurse, or emergency service workers — are heroes in their own right," she said. "They are showing up in the face of this virus, despite the fact that they have families at home who they're putting at a greater risk by doing so."