Serena Williams may be best known as a professional tennis star who holds 23 Grand Slam singles titles, but her Instagram profile reads, "I'm Olympia's mom." At New York Fashion Week: The Talks in 2019, Serena shared that becoming a mom to now 4-year-old Alexis Olympia — even though she wasn't sure she'd ever get to be one, despite always having the dream — is the best thing that's ever happened to her, and damn, Olympia is one lucky little girl.

"For me, she's the best thing that's happened to me and I've had so many amazing things happen to me, so that's really saying a lot."

"Becoming a mom is something that I've always wanted to do, but I was getting older and [it was] not really going to happen," Serena said on Sept. 9. "I love being her mom, and it's such a great feeling. For me, she's the best thing that's happened to me and I've had so many amazing things happen to me, so that's really saying a lot."

Yeah, we'd say so! But despite Olympia being the one true apple of Serena's eye, the 40-year-old still has moments when she can't believe she's actually a mama. "I feel definitely evolved, but the other day we were at dinner and I'm like, 'How am I a mom?! How did that happen?' I remember being pregnant, but it feels like a lifetime ago. I was just hanging out with my friends, and I was like, 'I'm a mom!' It's weird!"

As for women who share Serena's previous dream of becoming a mother, the tennis star says that there's never a right time to try for kids, and her advice is that if you want it, just go for it. "You've got to just jump in," Serena said. "That's the best way." 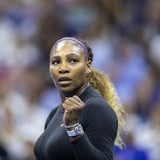