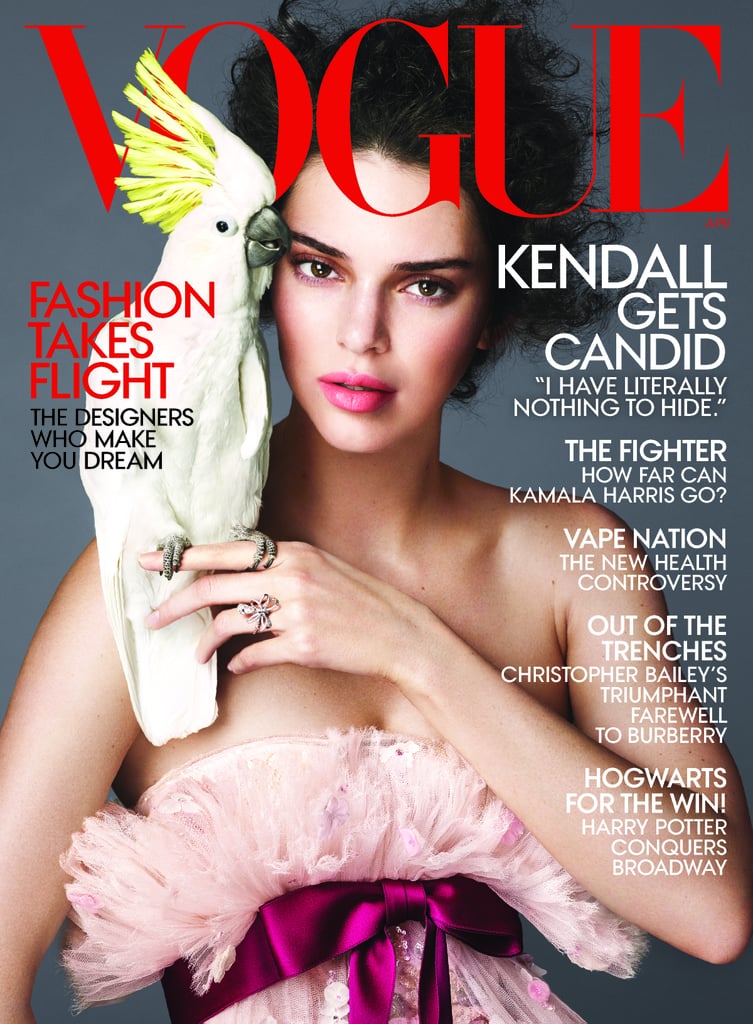 Nabbing the cover of Vogue is hard enough, but Kendall Jenner has several under her belt, and she just scored another for the April 2018 issue. The 22-year-old model looks laid-back posing in a gorgeous pink Chanel dress while just casually holding a cockatoo with one finger. Yes, you read that correctly. For the cover interview, Off-White designer Virgil Abloh perfectly summed up why Kendall is his muse, and such a powerhouse:

"She exemplifies exactly what inspired me to design women's clothes: She's independent, strong, self-assured. It comes from a place of self-confidence, but with no air of arrogance, which is rare. In 30 years, I wouldn't be surprised if people have forgotten that she was one of the top models of the time and know her for something else."

The Vogue cover reads, "Kendall gets candid," and that couldn't be more accurate. In the interview, Kendall touched on her controversial 2017 Pepsi commercial, her love life, and why she's decided to take a step back from her busy career. The looks for the shoot match the theme perfectly — she's so carefree, yet fabulous. Keep reading to see her in action, then watch Kendall ask herself some hard-hitting questions in the accompanying video.

Related:
Kendall Jenner Wants You to Know She Works Hard as a Model, So Don't Even Try to Discredit Her Work
Previous Next Start Slideshow
Fashion VideoFashion NewsSpring FashionKendall JennerVogueCelebrity StyleSpringModelsMagazinesMagazine Covers
Around The Web

Rihanna
If Rihanna Taking Out the Trash in Neon Pink Heels Isn't a Whole Mood, IDK What Is
by Nikita Charuza 5 days ago

Kendall Jenner
Kendall Jenner Doesn't Just Have a Huge Closet, She Also Has a "Hannah Montana" Fitting Room
by Sarah Wasilak 6 days ago