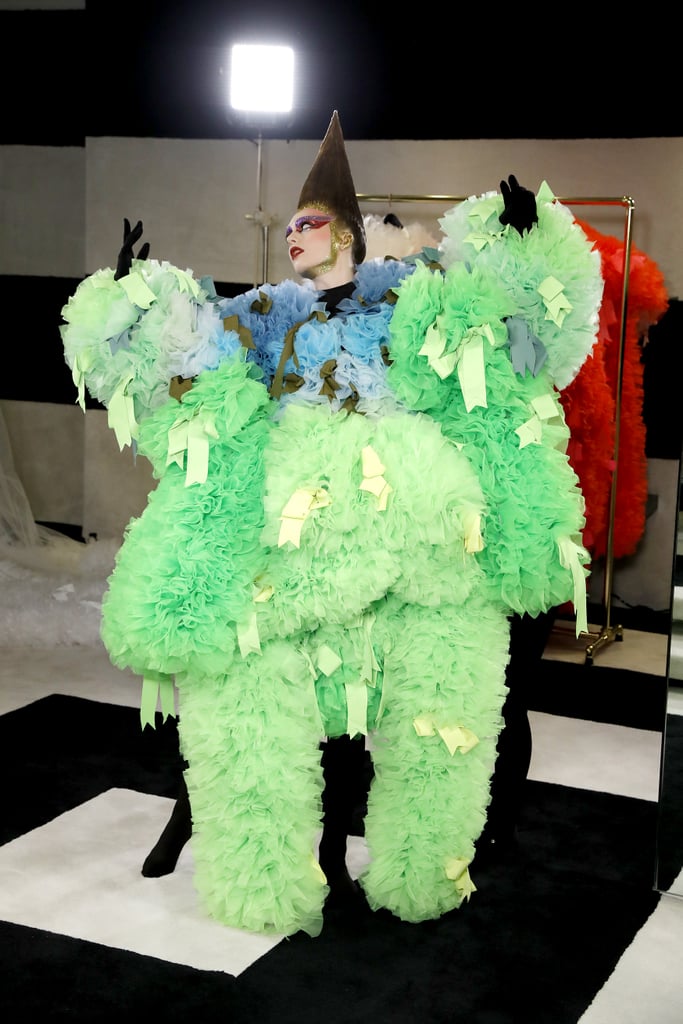 On day one of New York Fashion Week, Japanese costume designer Tomo Koizumi showed a spectacular range of rainbow-colored, black, and white dresses in a theatrical performance at the Marc Jacobs store on Madison Avenue. After a buzzy foray onto the NYFW scene for Fall 2019, showgoers like myself expected an extravagant presentation as we lined the illuminated stairways and mirrored walls in anticipation.

With a brightly lit showroom and sleek silver racks of couture gowns before us, 17-year-old model Ariel Nicholson stepped into the light in the first look: a voluminous gown that cascaded down her frame in an ombré palette of seafoam green, daffodil, and lemony yellow, all the way to a zingy chartreuse. Punctuated by a slick, cone-shaped hairstyle and glittering gold and purple makeup by Pat McGrath, the theatrical number instantly felt like a costume made for Lady Gaga (particularly during her Artpop era).

But the theatrics didn't stop there. After prancing, twirling, and undulating about the spotlighted showroom floor, Nicholson slipped out of her couture gown with the help of dressing assistants (revealing a satiny black unitard) and into the next gown — a deep sky blue, indigo, and lime green confection with a bird-like aesthetic that was only amplified by the model's interpretive wing flaps and body sways.

With five more costume changes to follow, which included a tiered bridal-white frock (with veil!) and poufy black-swan-esque dress to finish, the dramatic show concluded, leaving each and every attendee in awe. Ahead, witness all six of the showstopping looks for yourself from every angle, followed by beautiful images from Tomo Koizumi's Spring Summer 2020 lookbook. We'll be standing by waiting for Lady Gaga to take one for a spin on the red carpet. 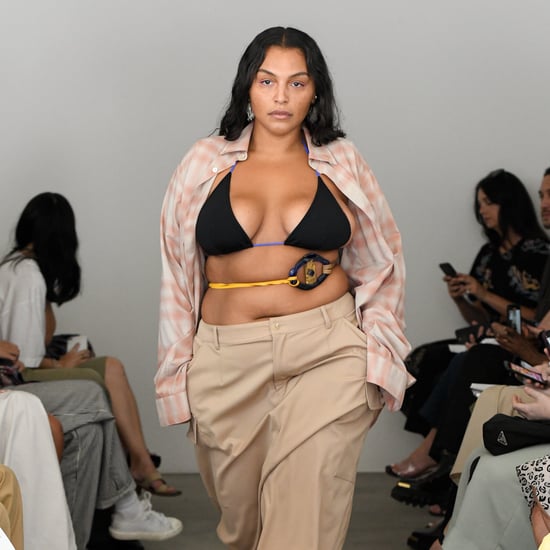 Fashion News
Chromat Shows Swimwear For Trans, Nonbinary, and Queer People on a Feel-Good Runway at the Beach
by Sarah Wasilak 4 days ago
Halsey
Halsey Has Us Hypnotized in a Gothic Red Corset During a NYFW Date Night With Alev Aydin
by Chanel Vargas 1 week ago