There are a lot of stunning models in the fashion industry, but Nyakim Gatwech stands out as the "Queen of Dark" — and the Sudanese beauty wouldn't dream of changing herself to fit in.

The 24-year-old has taken the modeling world by storm, but she has also become an inspiration to people who are perfectly content not knowing Gucci from Galliano. In March, Gatwech grabbed headlines after revealing an Uber driver asked her whether she would ever bleach her dark black complexion for $10,000, the assumption being that her skin was too dark to be deemed acceptable by society's standards. Her response? Laughter, followed by, "I would never do that. I consider my skin to be a blessing."

So, who is Gatwech and how did we get so lucky to have her serving as a vital voice for the self-love movement? Truth be told: fate, talent, and the fact that Gatwech struggled to accept her skin tone all have a lot to do with her success as a model.

Gatwech was born in South Sudan at a time when the African country was in the throes of a brutal civil war. Her nation's instability rocked her childhood and, as a result, she lived in refugee camps in both Ethiopia and Kenya before ultimately immigrating to the United States with her mother and siblings at the age of 14. They set down roots in Minneapolis, MN, and Gatwech, who says she had never experienced discrimination for her skin color while living in Africa, got a sudden crash course in America's narrow (and very white) standards of beauty while attending middle school.

In an interview with Teen Vogue, Gatwech recalled how some of the kids in school made fun of her dark complexion and she revealed that modeling wasn't even a thought in her mind.

Related:
Keep Your Eyes Peeled Because These Are the New Models You're About to See Everywhere

Luckily for us, that all changed when Gatwech was a junior in high school and became curious about the modeling industry after several strangers stopped her to ask if she had ever considered posing for photos or strutting down catwalks. Her sister, who had done some modeling, pushed Gatwech to pursue modeling in an effort to help diversify the industry.

Gatwech has since built up an impressive portfolio, walked for designers, and posed for some of the most stunning photos, but her reach extends far beyond her modeling work. Her Snapchat and Instagram, where she has 286,000 followers and counting, are beacons of self-love and self-acceptance. She uses hashtags like #melaninpoppin, #myblackisbeautiful, and #melaningoddess to make it crystal clear that she isn't apologizing for her gorgeous skin and will continue to promote her beauty and the beauty of others like her. She has been known to share encouraging messages like, "It takes time to love who you are. Be confident in whatever the situation. If you love yourself other people will see. It will shine through you and then they have the choice to accept you or walk away."

Related:
22 Things You Can Do to Love Yourself

Gatwech has said she receives both insults about her skin and messages from young women who look up to her, and she chooses to focus on the positive. She extends the same love she reserves for herself to others, as she did in this post where she wrote, "In today's era black men are beaten and killed for no reason, they are depicted as criminals and thugs in the media . . . we must come together and support our black men! Love our black men! Stand by our black men! And show the world how strong and innovative they are!"

If our predictions are correct, it won't be long before Gatwech scores major magazine covers, but it sounds like the model has other major goals that have nothing to do with fashion or her beauty. She's finishing up courses at Minneapolis Community College and plans on one day becoming an elementary school teacher so that she can give back to her community.

Granted, Gatwech has important life experiences to share as an educator and would make an incredible role model, but we'd be lying if we didn't say our fingers are crossed that she scores the cover of Vogue before the school bell rings.

Models
Around The Web

Gigi Hadid
My Heart! Gigi Hadid Looks So Cute Showing Off Her Baby Bump in a Crop Top and Bucket Hat
by Nikita Charuza 1 day ago

Coco Rocha
Christian Siriano Hosted a NYFW Runway Show at His House, and Coco Rocha Jumped in the Pool
by Nikita Charuza 1 day ago

Gigi Hadid
Gigi Hadid Modeled For Kith x Calvin Klein's Underwear Collab, and the Pictures Are Something Else
by Nikita Charuza 1 week ago 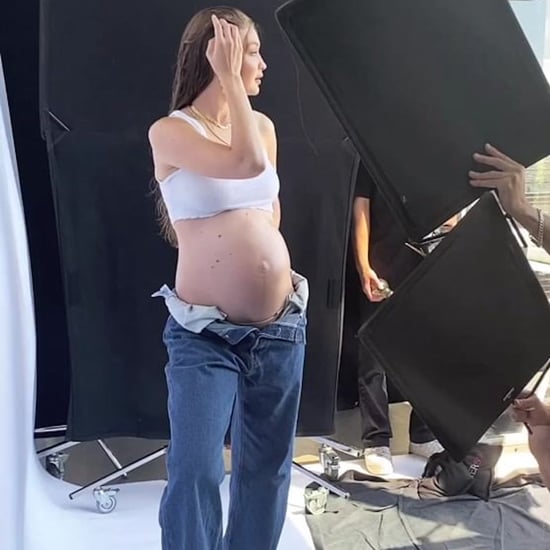