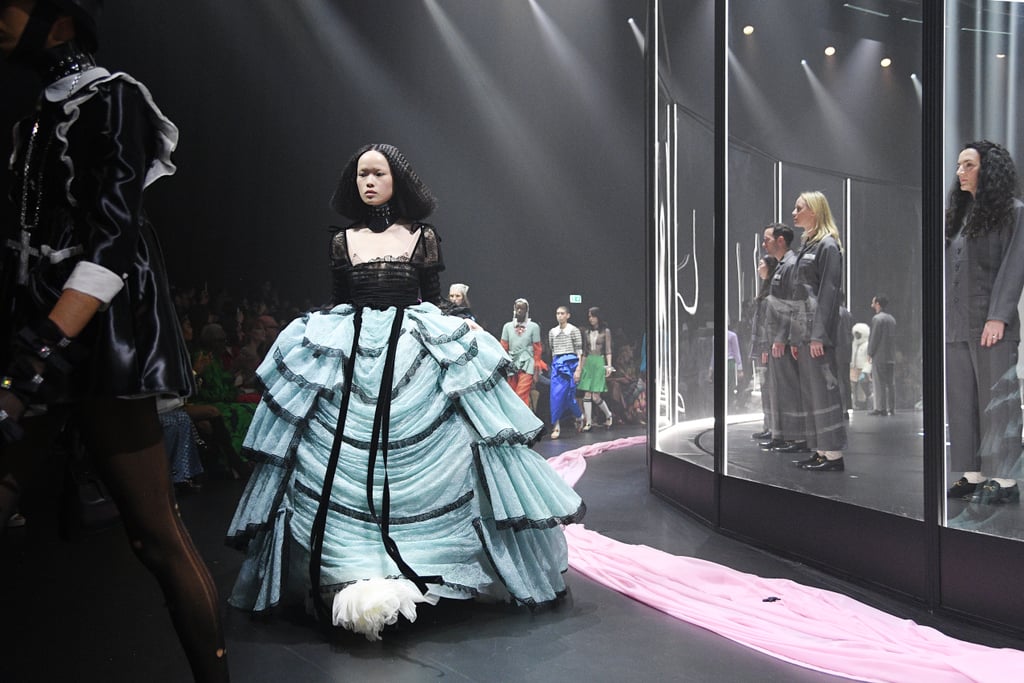 Gucci's Fall 2020 Collection Was All Types of American Gothic

Gucci is certainly the buzziest show at Milan Fashion Week. For the brand's Fall/Winter 2020 collection "An Unpredictable Ritual," Creative Director Alessandro Michele went in a more somber direction. Rather than the geek-chic aesthetic we've come to love from the Italian house, this year saw mixed Pilgrim-era looks and Victorian-inspired designs with subversive undertones of bondage and religion.

It was a delightfully unusual set for Gucci Fall 2020. The centerpiece of the show simulated a behind-the-scenes set-up, with models and hair and makeup teams sitting in a glass-walled circular room. As usual with Michele, there was an expansive number of runway looks which mixed womenswear, menswear, and gender-neutral dressing for an exceptional collection. It's only a matter of time before Harry Styles rocks one of these colorful, ruffled new season looks that are synonymous with his androgynous personal style.

There was a lot of religious subversion in the collection, and the fact that Italy's Vatican City is the mecca of Catholicism — plus the fact that the show itself took place Milan — you could say it was quite political too. Models were accessorized in necklaces with chunky gray cross pendants, while at the same time rocking black vinyl bondage-inspired harnesses and chokers. The collection explored the complex relationships between and rituals of bondage, religion, magic, and historical dress.

"I have always considered the fashion show as a magic event bursting with enchantment," Michele said in a statement from the brand. "A liturgical action that suspends the ordinary, loading it with an excess of intensity. A procession of epiphanies and expanded thoughts that settle into a different partition of the sensible."

Michele seems to romanticize the Pilgrim and Victorian eras of fashion, while adding modern touches of '70s-inspired floral suits and gothic styling. We could definitely see many of these looks being worn on Chilling Adventures of Sabrina or by the actual witches from the Salem trials of the 1600s.

Ahead, get a closer look at Gucci's Fall/Winter 2020 collection.

Margot Robbie
Fashion Hack From Margot Robbie: An AirPods Case Can Double as a Purse
by Victoria Messina 1 hour ago