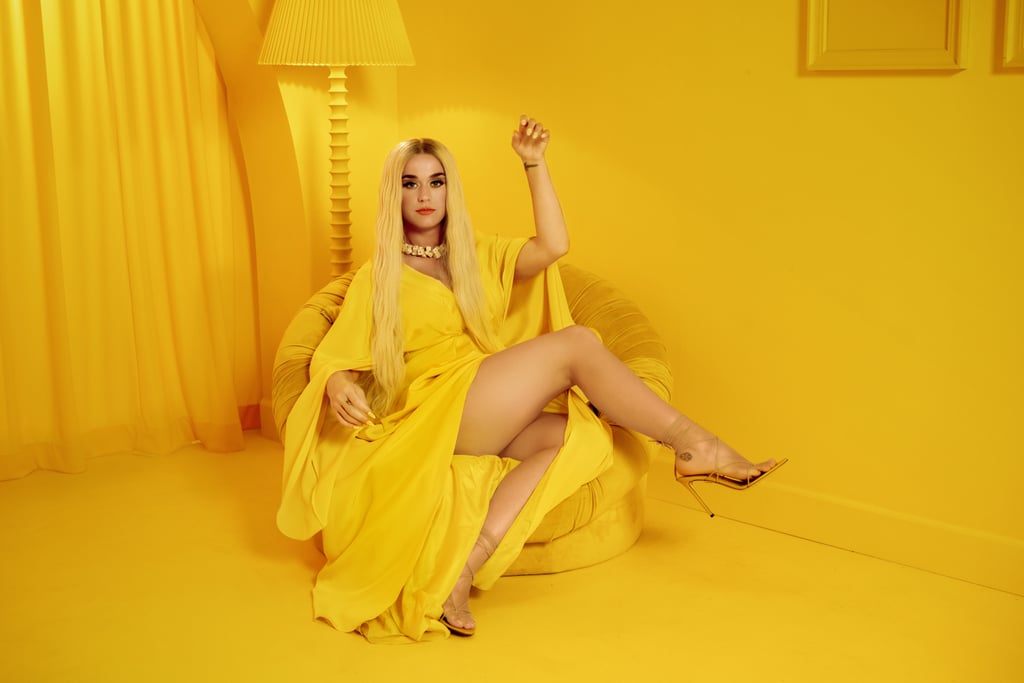 Joining the likes of Mariah Carey, Jennifer Lopez, and Lady Gaga, Katy Perry is taking on her first Las Vegas residency, and the fan perks already look sweeter than her entire California Gurls video. Speaking with POPSUGAR about her recent collaboration with Spotify and BEHR Paint on their new Music in Color wheel, Katy mentioned that she's been sorting through her costume warehouse — aka where she keeps all the outfits she's ever worn on stage — and several of her looks are up for grabs.

Often dressed in vibrant, avant-garde outfits saturated with color from head to toe, it's understandable that Katy couldn't name just one ensemble from her warehouse as her favorite. "From the California Dreams tour, I made a light-up candy dot leotard," Perry said. "That was so fun for me, because that was all candy-themed at that time, and old-fashioned candy is very fun, even if it doesn't taste great." Tied with her flame-covered Jeremy Scott two-piece she wore to Super Bowl XLIX, the candy leotard is no match for her actual favorite fashion moment.

"My biggest regret, though, is not rolling down those stairs at the Met in my cheeseburger costume."

"I think one of my favorite moments in my costume life was just being a cheeseburger," she said, referring to her bedazzled outfit at the 2019 Met Gala, designed by Erin Lareau. "I just don't think it'll ever, ever get old for me. My biggest regret, though, is not rolling down those stairs at the Met in my cheeseburger costume." Yours and ours, Katy.

As for who gets to keep her outfits, the "Dark Horse" singer has mentioned that her daughter, Daisy Dove, and her four nieces have first dibs on her personal wardrobe. But you don't have to be a blood relative to claim one of Katy's outfits as your own. As part of her Las Vegas residency, which begins Dec. 29, Katy will be partnering with SADA to create NFTs for all of her Vegas shows, each of which will be paired with a tangible tour costume, including props from past tours, music videos, and more memorabilia.

Keep your eyes open for more announcements from Katy about how to get your hands on a piece of her iconic wardrobe, and relive some of her favorite performance outfits here.

TV
Fun Fact: I Know What You Did Last Summer's Alison and Lennon Aren't Actually Twins in Real Life
by Naledi Ushe 8 hours ago

Music
Chlöe Opens Up About Owning Her Sexuality: "I'm Learning It's OK to Be Who I Am"
by Princess Gabbara 9 hours ago