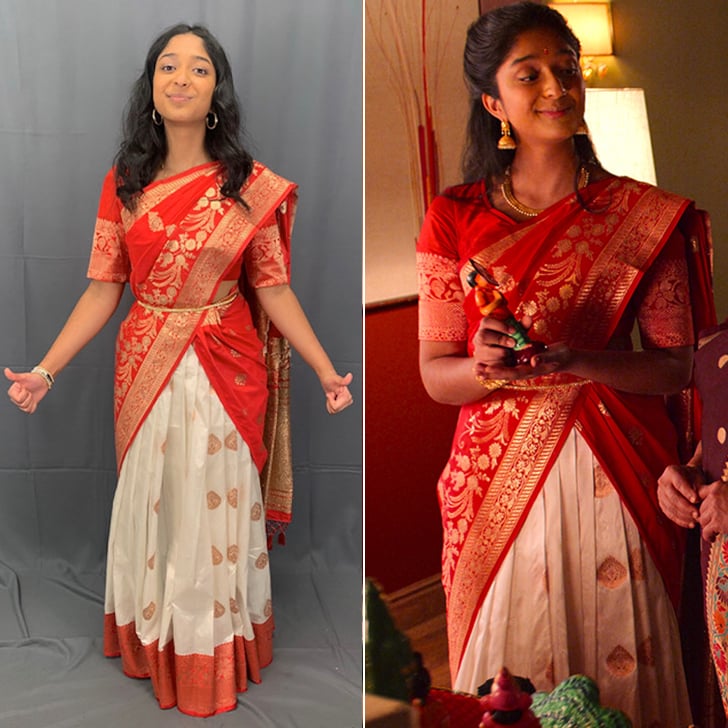 Devi Vishwakumar's colorful print-mixing has become something of a trend among stylish fans of Netflix's "Never Have I Ever." Costume designer Salvador Perez tells POPSUGAR he calls her look "unfashionably fashionable," meaning she owns her sense of style without being luxury-obsessed.


"Though we kept her printed pants and oversize cardigans, we also made her a little more fun and flirty."

Devi, played by Maitreyi Ramakrishnan, is known for a quirky, '90s-inspired sense of style. She's worn everything from multicolored Free People cardigans to plaid Urban Outfitters pants teamed with combat boots. It's an aesthetic that's loosely based on show creator Mindy Kaling's sense of style during her teenage years in Sherman Oaks, CA, Perez says.

But when season three was announced, Perez was busy designing for "Hocus Pocus 2," and passed the reins to his former assistant Glinda Suarez, who was also Kaling's personal costumer for "The Mindy Project." Suarez, who has worked with the "NHIE" costume team since season one, pulled off a smooth transition by playing off Perez's approach, and further elevating the series outfits.

"Salvador is a tough act to follow, so of course there were some nerves taking over for season three, but he set me up for success," she tells POPSUGAR via email.

"Devi had a bit of a glow up," Suarez teases of the protagonist's newfound confidence in season three. "She is a junior now and finally has a boyfriend she's been dreaming of since freshman year. Though we kept her printed pants and oversized cardigans, we also made her a little more fun and flirty, starting the season with a body-con dress for the 'Daxton' debut. We also added some lower necklines, like the sunflower blouse she wears to the party where she meets a certain new Indian heartthrob."

Ahead, see all the fashion details Suarez shared with us for season three, and look back on Perez's top moments from seasons one and two.

Related:
30 Movies and TV Shows Perfect For "Never Have I Ever" Fans
Previous Next Start Slideshow
Maitreyi RamakrishnanMindy KalingNetflixFashion InterviewTVNever Have I EverStreamingScreen Style