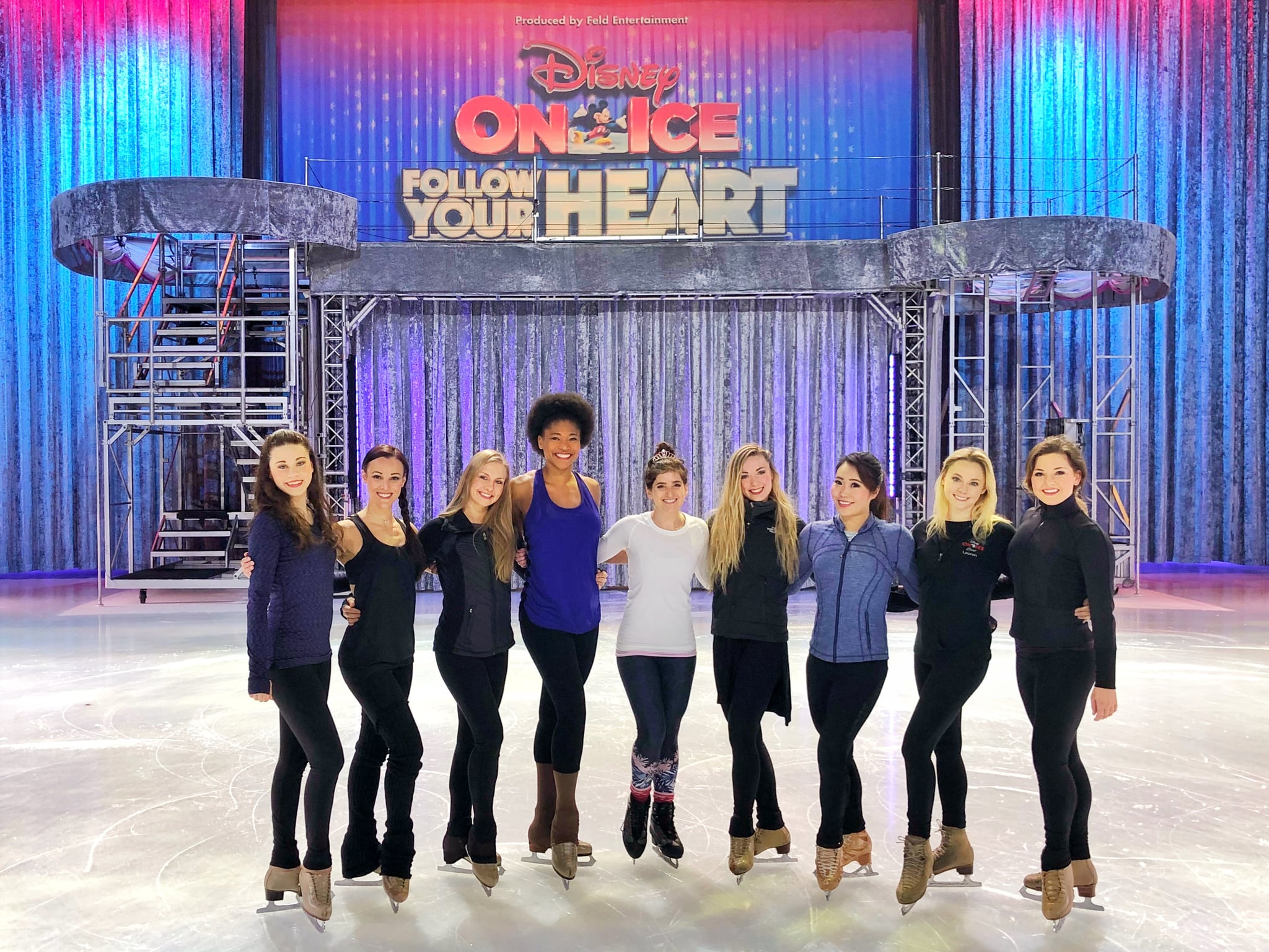 Clunking around on the ice for my very first skating lesson, I was in awe of how graceful and strong my instructor was, though not at all surprised. Sarah Dalton, a literal ice princess who portrays Princess Merida for Disney on Ice, was decked out in a sleek and sporty Lululemon outfit like the rest of her castmates and gave me sweet (and absolutely undeserved) compliments and bits of encouragement as she attempted to teach me how to spin (unsuccessfully — my fault, not hers) in our princess-inspired edge class.

She's a fiercely talented skater and performer, but that talent was only rivaled by her unrelenting and gracious kindness. Strength, patience, and kindness — ideal qualities for a princess-meets-role-model hybrid.

Related:
Whistle While You Work (Out) When You Have This Disney Playlist on Repeat

Growing up, princesses were saved by princes, relished cleaning and housekeeping (thanks, Cinderella and Snow White), typically married the first hot guy they met (I see you, Ariel), and had hopes and dreams centered on living happily ever after. But Disney on Ice has reinvented the idea of "princess" with its international tour, "Follow Your Heart," a show centered on the empowerment of women. I recently had the chance to peel back the curtain and interview some of the incredible women behind the athletic and inspiring princess characters who are giving young girls a new kind of heroine.

Inspiring the Next Generation

Each athlete I met had their own story about how they got into skating — they all started very young, between 2 (yes, 2) and 10 years old, and each had different dreams. Some were destined for Disney while others were Olympic hopefuls before sustaining on-ice injuries. And though I chatted with each princess separately, they all had the same answer when I asked what motivates them, the same thing that inspires them and drives them to be better: the young girls who look up to them.

Related:
34 Disney Workout Outfits That Make You Look Like a Beauty (and a Beast) at the Gym!

"The kids love it," said Kaela Kapeikis, who plays Cinderella. Both of Kaela's parents were Disney on Ice performers, so she was literally born into the business . . . I'm pretty sure Disney ice and magic flow through her veins. "We go up — almost into — the audience, and the little kids try to reach out to you. They're living through this experience." 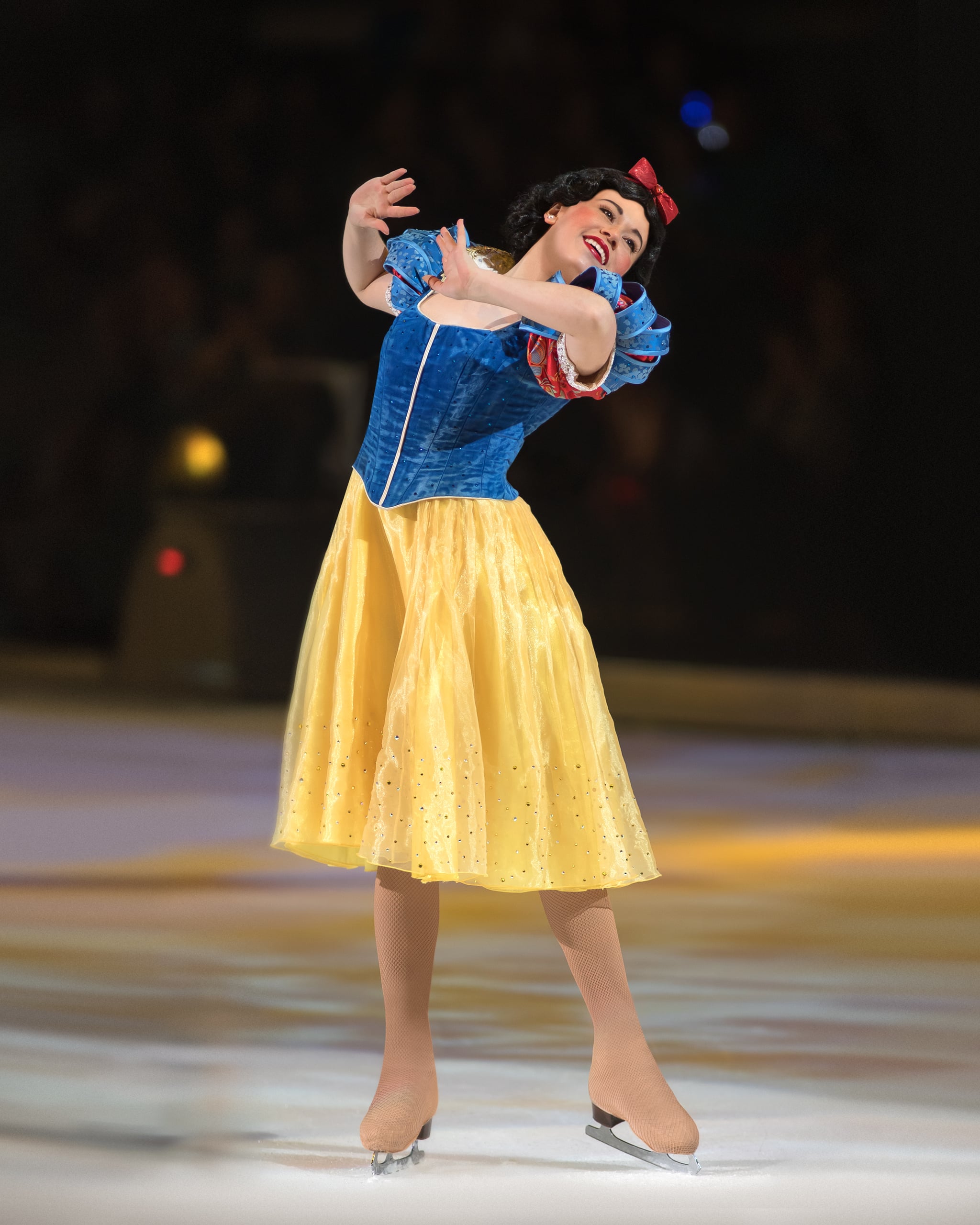 Each performer knows she is a role model, and it drives them to train hard, press through rigorous rehearsals, and keep in impeccable shape, performing well beyond what would be traditionally considered their competitive years.

Merissa Horkoff, a certified personal trainer and group fitness instructor from Calgary, Alberta, has been with Disney on Ice for 10 years and plays the part of Belle in "Follow Your Heart." We joked about how Olympic gold medalist Aljona Savchenko was considered "old" for the sport at 34 and how young competitive figure skaters tend to be. She shared with how she's a better skater now than she was at 18 — and how that's because of this hard work and motivation. "I'm 28 years old; I've been on tour for 11 years, and I have improved. My skating is way better than when I was 18 and I came here." 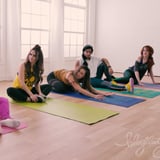 The Disney Princesses Work Out in 2017, and It's a Hilarious Disaster

"Recently there was a little girl right by where I end in the finale; she was wearing a Belle dress," said Horkoff. "I curtsied, and then she got up out of her chair and she curtsied — I had a moment with her! It's amazing that we get to do this for them."

Both Horkoff and Marina Bolam, the skater behind Snow White, said most people don't realize just how much work goes into it behind the scenes . . . an occasionally "grueling" but "really rewarding" experience comprising daily rehearsals that Bolam said create the polished, perfect package that the audience can get lost in.

"Our 'Princess Power' number shows everyone working together; it provides an example for young girls."

But that grueling training and constant travel schedule — they tour 10 months out of the year, mind you — also results in a serious bond between these ladies. That bond, connection, and sisterhood translates onto the ice, especially the part of the show that emphasizes the power of women working together.

They skate together, train together, take hip-hop classes together, go for runs together, recover together, and fuel up together, trading tips and tricks for staying healthy along the way. Belle (Horkoff) travels with a mini skillet while Cinderella (Kapeikis) loves bringing her slow cooker on the road to make home-cooked meals for the group. Nourishing, comforting foods are helpful when they're training six or seven days a week, 10 months out of the year. "It can be taxing, hard, and stressful, but it becomes your normal," said Kapeikis.

Related:
In Case You Needed More Reasons to Do a runDisney Race, Look at This Glitter Beer

Their unity manifests in one particular song in the performance. "Our 'Princess Power' number is the best," said Bolam. "It's so great that each princess has their special trait. It shows everyone working together; it provides an example for young girls. I've watched the show a couple times myself, and it's really inspiring to watch . . . it's really special."

"It's great to have this universal empowerment theme," said Anna Bradshaw, known as the high-flying Rapunzel on the aerial silks in the show. "We have this backstage [ritual]; before we go out, we put all our hands in together and go 'PRINCESS POWER!' as a little pump-up."

The princesses' traits Bolam was talking about are exactly how Disney on Ice is redefining these iconic characters. Instead of being known for the prince who saves her or what color dress she wears, it's telling a story about what qualities make each character special.

Related:
24 Reasons a runDisney Race Should Be Your First Half-Marathon 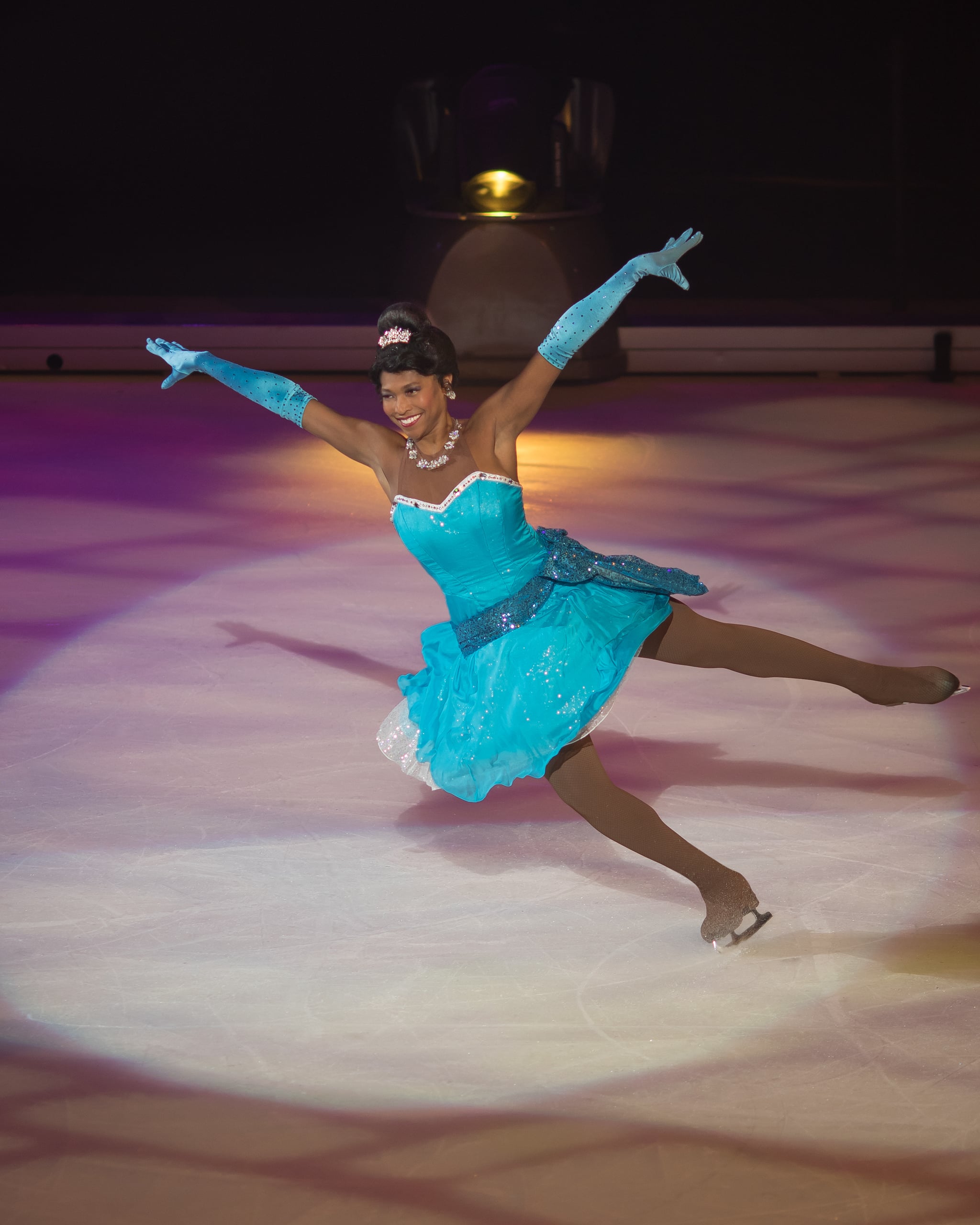 "Cinderella is all about working hard and being kind," said Kapeikis. "She's such a role model. She's a princess that kids can really relate to!" Hope Alexander, who plays Princess Tiana, feels similarly. "Skating is all about falling down and getting back up, never giving up. This show portrays that really well. The princesses are hard workers — I portray Tiana, and she's SUCH a hard worker, the hardest worker of the princesses. I always try to use her as an example in my life every day. Never give up and keep on going — it's a really important message."

"Skating is all about falling down and getting back up, never giving up. It's a really important message."

Bradshaw loves using her character to connect to her young female audience. "Rapunzel is super spunky, adventurous, independent, and curious," she said. "She marches to the beat of her own drum, and I really like that about her. When I get into character for her, I think of all the places I've been and all the places I want to go, and I channel that." She personally connects to the character's story — one that many young women can relate to as well. "Growing up as a figure skater, a lot of times you're very sheltered. When you get to go out and be independent, that's that path Rapunzel took. It literally is me spreading my wings on the silks [laughs]!" 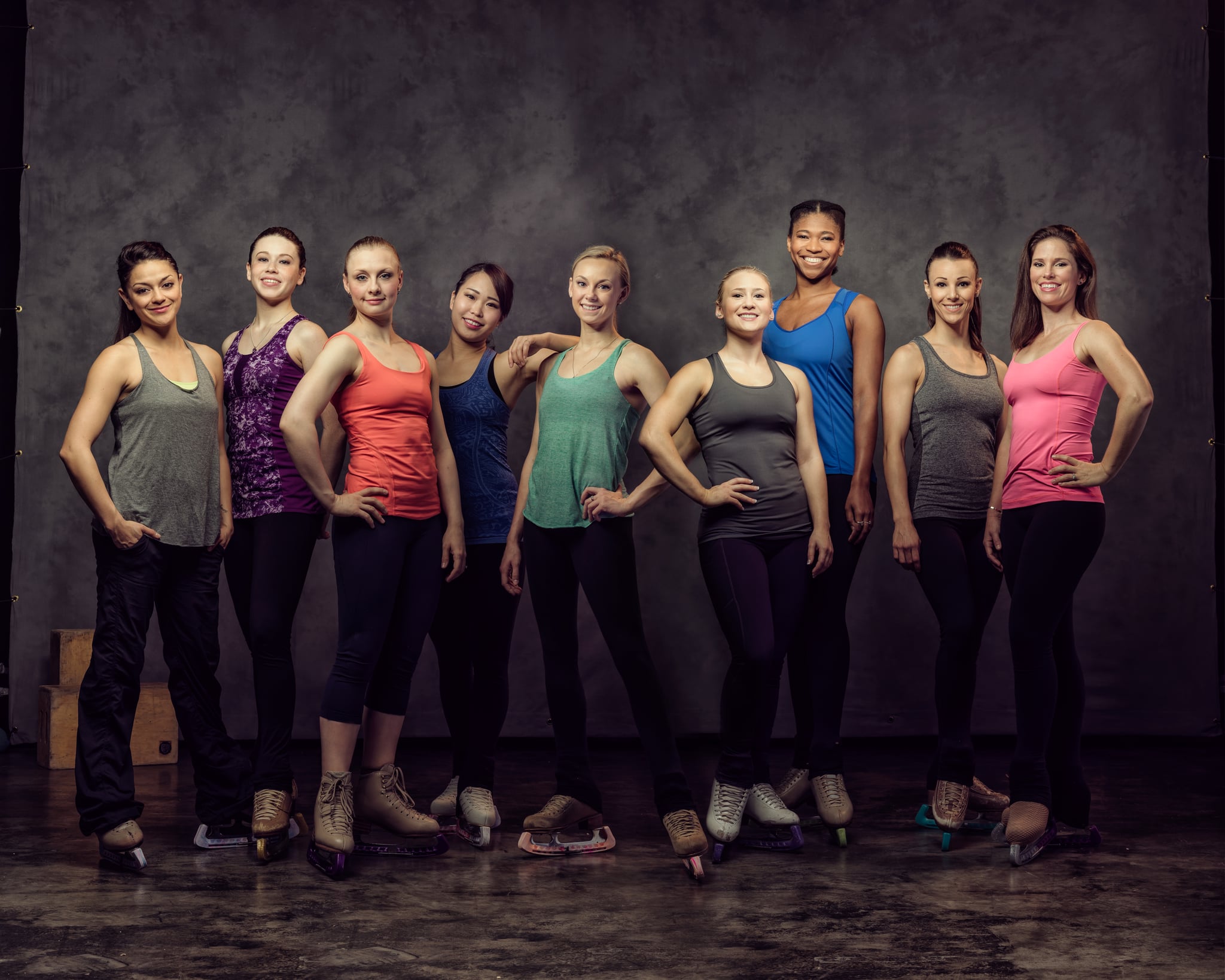 During the performance, each princess has her own segment showcasing a strength of hers: Ariel's sense of wonder and curiosity, Belle's powerful intelligence, Mulan's unrelenting courage, Merida's intense bravery, and Tiana's ambition and drive . . . these are all strengths we want to encourage in young women, and it can start within something that feels magical and entertaining. By reframing these heroines and highlighting their gifts, something as innocuous as a figure skating performance serves as an opportunity to inspire and empower the next generation, but in the most enchanting way possible.

Workouts
This Advanced Ab Challenge From Kayla Itsines Is Perfect If You Want to Push Yourself Hard!
by Jenny Sugar 3 days ago

Justin Bieber
"Hold On" to Your Abs, Because This Justin Bieber Workout Is a Good One
by Samantha Brodsky 3 days ago