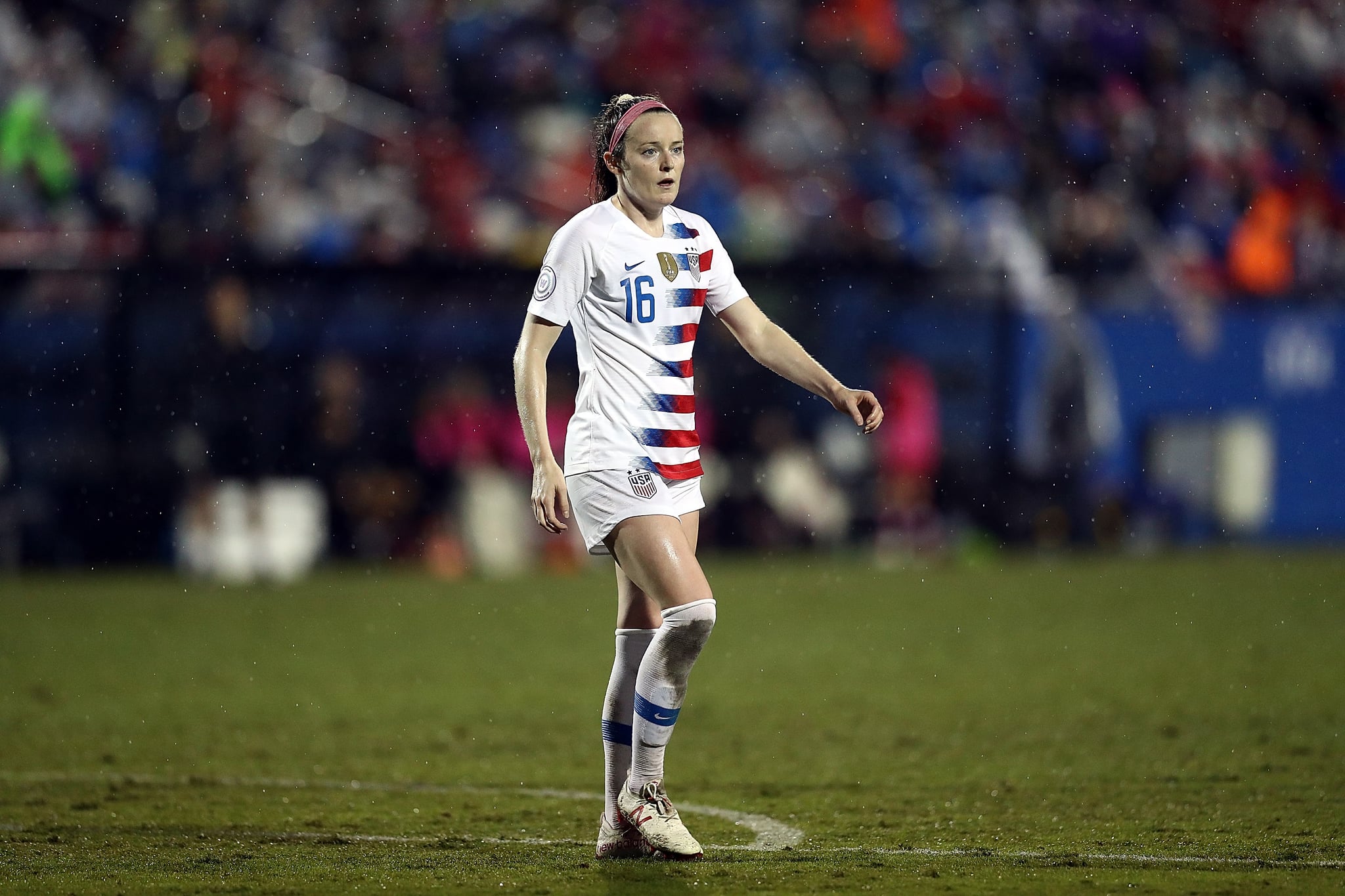 Abby Wambach is arguably the best soccer player of all time. When you have two Olympic gold medals and a World Cup champion win, and you hold the record for most scored goals in international competition history — for both men's and women's teams — you deserve that title. (For the record, that number is 184, and to put that in perspective, Mia Hamm scored a total of 158 in her wildly successful career.)

Abby, who played as a forward, retired in 2015 after the World Cup victory tour. Her last professional appearance on soccer turf was midfielder Rose Lavelle's first time training with the women's national team — she was invited to participate in the tour's final four matches after standout performances in the Under-20 league.

Related:
A Pro Athlete Does This One Thing to Calm Her Nerves, and You Can, Too

Rose is part of soccer's next generation, and June's FIFA World Cup will be a first for her. During a meeting about her partnership with the sports tape KT Tape — which is selling limited-edition rolls with Rose Lavelle's face on the package throughout the World Cup — she spoke to POPSUGAR about Abby's parting words, her experience playing with older teammates, and her own advice for young soccer players.

Out of the 23 members of the 2019 women's national team, five have appeared in at least 10 World Cup matches. Rose, 2016 Olympians Mallory Pugh and Crystal Dunn, as well as eight others, are World Cup newbies. "It's cool to be able to be with this group. I feel like I came at a cool time where there was a wave of new people coming in, but there was also still a lot of older veterans on the team, too," Rose said.

She's learned a lot from these veterans soccer-wise, she continued, because they have so much experience and are "so professional in how they carry themselves both on and off the field." They have a competitive mentality in games and in training that, Rose said, is the reason they've been so successful. This competitiveness and "never-die attitude" is something she feels they need to uphold for continued success.

Rose detailed exactly what Abby told her and her peers at that last retirement game. "Abby was like, 'To the younger players who haven't been here, this environment is super competitive. It's not that it ever gets easier, but the players that are here the longest make it look easy,'" Rose added that Abby's words struck her, and when you're first thrown into the world of professional soccer, it's hard, she explained. "It just made me realize, it's not gonna get any easier. You're gonna have to keep fighting, day in and day out, for a spot on this team, but it makes it all the more rewarding when you do earn it."

"This is a new team and a new journey."

And Rose has earned it. The women's national team is entering the World Cup as defending champs — they've won a total of three times so far — but the 24-year-old said they're a very different group from the ones who came out on top in 2015. "We're not looking behind us, I feel like we're just looking forward," Rose said. "This is a new team and a new journey."

There were so many times early in her career, she said, that people doubted her because of her size — "I've always been a really small player," Rose said. The key to getting through that doubt, she said, is confidence in yourself. After hearing about what she's learned from veterans on the team, POPSUGAR asked Rose what her own advice would be to soccer players that follow in her footsteps. She said, "For anyone, any young girl . . . just love what you do and don't let anyone tell you, you can't do it."