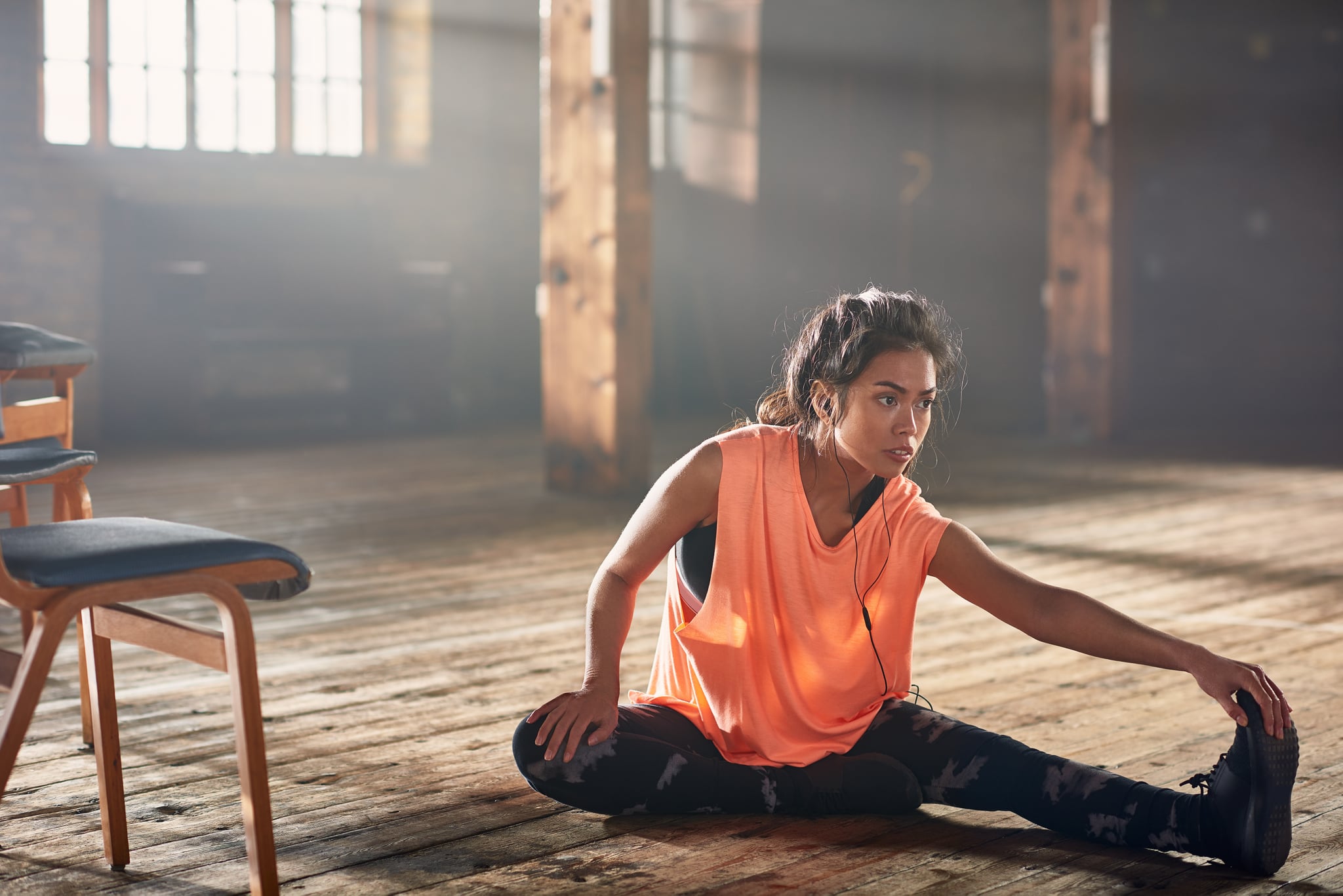 After a hard workout or a long race, it's typical to feel some muscle soreness for a day or two. Usually, rest or some light exercise will loosen up your muscles and get you back on your feet. When that soreness is more debilitating and widespread, though, it's worth giving it more attention; it might actually be a medical condition called Delayed Onset Muscle Soreness, or DOMS.

DOMS doesn't just feel like intense soreness; your muscles are actually noticeably weaker. "Your muscles feel almost dead, like you have no power in them," said Michael Fredericson, MD, professor and director of physical medicine and sports medicine at Stanford University. Sometimes, people suffering from DOMS "can virtually do nothing, they're so sore," added Steven Mayer, MD, sports medicine specialist at the Northwestern Medicine Running Clinic.

The pain is also more diffuse, or spread throughout your muscle, Dr. Mayer told POPSUGAR. "It's more of a generalized soreness after exercises, versus a localized injury, like a muscle strain," he told POPSUGAR. "You tend to be tender in a lot of different places in the muscle."

The pain also tends hang around for a few days without getting any better, said Dr. Fredericson, past the time where run-of-the-mill soreness should've started to dissipate.

Related:
5 Stretches Your Tight Hips Are Begging For

Another frustrating thing about DOMS: no one knows exactly what's behind it. Both doctors agreed that it's thought to be related to muscle inflammation, but no study has definitively proven it. Using anti-inflammatory drugs like aspirin or ibuprofen to treat DOMS have only shown mild benefit, not outright success, Dr. Mayer explained.

As far as doctors know, DOMS tends to result from eccentric exercises. Those are movements in which the muscle is getting longer instead of contracting or getting shorter, which you'll feel happening in your quads when you run or walk down hills, for example. That means running can lead to DOMS, particularly if you're doing a lot of uphills and downhills. Weightlifting is also a common cause of DOMS, since you're doing a lot of repetitive load-lifting and eccentric movements, Dr. Mayer explained.

No matter what brings it on, he said, DOMS often occurs when you're just starting a new kind of exercise, or ramping up the intensity. That means that, as far as prevention goes, ramping up your exercise slowly is a good choice, whether that's distance in running or weight and reps in strength-training.

Related:
Should You Exercise When You Are Sore?

How Can You Prevent and Treat DOMS?

What about treatment? Again, there's no one proven solution, Dr. Fredericson said. That doesn't mean you don't have any options, it just means you might have to try a few different ones first. Some possible treatments include:

Both doctors cautioned that while light exercise can really help your muscles feel better, you definitely shouldn't push it into a harder workout, which can make your symptoms worse. "Tailor it to your tolerance," Dr. Mayer said; if you have to walk instead of jog, that's fine. Make sure to drink plenty of water as well; Dr. Fredericson noted that dehydration might play a role in DOMS as well.

If your DOMS symptoms persist after three days, consult a doctor. It might be a symptom of rhabdomyolysis (commonly called rhabdo), a serious condition that occurs when too many muscle fibers break down and which can affect your kidneys. Another key symptom of rhabdo is lack of urination, or urine that's dark yellow in color.

Above all, be patient with your body when you're jumping into a new fitness program or ramping up your intensity. You'll avoid the intense, uncomfortable soreness of DOMS and prevent injuries as well.

Workouts
What Happens If an Athlete Gets COVID at the Olympics? We Have the Answers
by Jenny Sugar 11 hours ago

Workouts
Are Crunches Straining Your Neck? Try One of These Ab Workouts Instead
by Emily Weaver 12 hours ago

Workouts
I, a 300-lb Woman, Tried Aerial Yoga — This Is What Went Down (Spoiler: Not Me!)
by Angelica Wilson 1 day ago

Workouts
Here Is Exactly How Long Your Jump Rope Should Be, According to a Trainer
by Brittany Natale 1 day ago