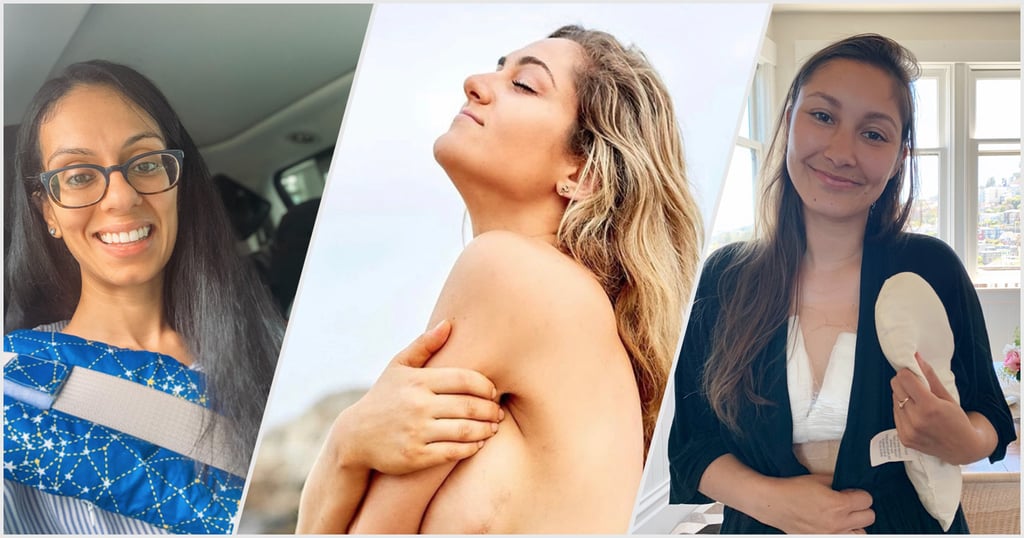 About one in six women diagnosed with early-stage breast cancer choose to remove their breasts with a double (or bilateral) mastectomy, according to a study published by JAMA Surgery. Aside from having cancer, those at a high risk of the disease because of family history or due to BRCA1 or BRCA2 genetic mutations can opt to get a preventative mastectomy, which reduces the likelihood of developing breast cancer by up to 90 percent and 95 percent, respectively. Either way, numbness mainly in the chest area, and sometimes other parts of the body like the arms and shoulders, affects people who undergo mastectomies — and women we spoke to who had these surgeries said the topic isn't talked about nearly enough.

Numbness is one of the symptoms of what's called "post-mastectomy pain syndrome" usually caused by nerve damage, affecting 25 to 60 percent of mastectomy patients, according to The New York Times. Depending on the extent of the surgery, nerves can heal and regenerate overtime, but there are instances where women lose feeling for years. If surgeons don't try to actively keep or restore nerves during a mastectomy, you're going to have numbness — and that numbness ranges.

Shelley Hwang, MD, MPH, chief of breast surgery at Duke Cancer Institute, told POPSUGAR that the degree of numbness occurring post mastectomy has to do with a number of factors "including the extent of surgery, whether reconstruction was performed and what kind of reconstruction, incision placement, and whether the lymph nodes were removed." She explained that if the mastectomy is being done as part of cancer treatment, lymph nodes are often removed, which can cause numbness or nerve sensitivity in the area under the arms.

Anne Peled, MD, who is trained in both breast oncologic surgery and plastic surgery, emphasized that what kind of nerves are cut and how widespread your mastectomy is contributes to loss of sensation. She has adopted a nerve-grafting technique not yet widely used by surgeons called Resensation, which she does alongside her husband, plastic surgeon Ziv Peled. The technique is performed the same time as flap reconstruction surgery (using the body's own tissue for reconstruction as opposed to implants) and, as a term, has traditionally been used for flap reconstruction only. Because Dr. Peled has found a way to implement the nerve-grafting technique with implant reconstruction, she doesn't refer to the procedure as Resensation in her practice thus far, and instead uses "sensation-preserving mastectomies."

While Dr. Peled performs a mastectomy, her husband works to preserve as much of the nerves as possible. Then, while Dr. Peled executes implant reconstruction, her husband uses nerve allografts to reconnect the nerves and provide sensation to the nipples and breast skin. The key is having, as she described it, a "thoughtful mastectomy technique," something that's especially important because many people do experience nerve pain post surgery.

Related:
I Was Diagnosed With Breast Cancer at 29, and There Were Times It Was Incredibly Lonely

Even just a year ago, Dr. Peled wasn't hearing from women about preserving sensation during mastectomies, but now she'll have a handful of potential patients reach out to her per day. Restoring sensation isn't typically a focus of breast reconstructive surgery and she wants to change that, especially after being diagnosed with stage 1 breast cancer herself in 2017. She opted for a lumpectomy (removal of a "lump" or part of the breast) with oncoplastic surgery, though she knew that many women at a similar stage in their diagnoses were undergoing full mastectomies and those surgeries happened without sensation preservation. "Now that our technology's evolved, now that our awareness of the importance of sensation has evolved, we have these different ways to try to optimize the sensation," she said. It's about giving women more options (especially since breast reconstruction has risen over the years).

When asked about Resensation, Duke Cancer Institute's Dr. Hwang said that she thinks it's an interesting new area of research "and an emerging procedure that is still only offered in a very small number of centers," adding that it is "probably too early to know whether consistent results can be obtained." However, Dr. Peled noted that 80 to 90 percent of her patients get their sensation back in the areas that lost that sensation (namely, in their chests). In a study published last July, 12 of her patients had a three-month followup post surgery with the doctor, and 87 percent of the breasts had preservation in NAC 2-point discrimination, which Dr. Peled said basically is a "woman's sensation to fine touch in their nipples." She and her husband now have data on over 150 breasts that is yet to be published.

How fast Dr. Peled's patients regain feeling depends on the nerve preservation itself. "If you're able to preserve and keep some of the nerves during surgery, it's faster, but when you're actually talking about reconnecting and reconstructing nerves, we really need to be talking about six months to a year and, in some cases, even a little longer," she explained. She also said that if chemotherapy and radiation are needed for someone who is having a mastectomy due to cancer, that can impact how long the nerves take to heal.

While it's essential that people undergoing mastectomies know about their options — and their potential to regain sensation — numbness still occurs. Four women POPSUGAR spoke with who underwent mastectomies (two of whom had nerve grafting done) all experienced, or still experience, some type of numbness. Keep reading for their stories, as well as their tips for how to connect with confidence post surgery. It's a long journey, but understand that it's more than possible. It's absolutely probable.

Related:
You're Not Too Young to Think About Breast Cancer — 6% of Diagnoses Are Under 40
Previous Next Start Slideshow
Healthy LivingHealthBreast CancerCancer

Health
Is It Safe to Eat Oranges in the Shower? We Fact-Checked TikTok's Latest Trend
by Melanie Whyte 11 hours ago