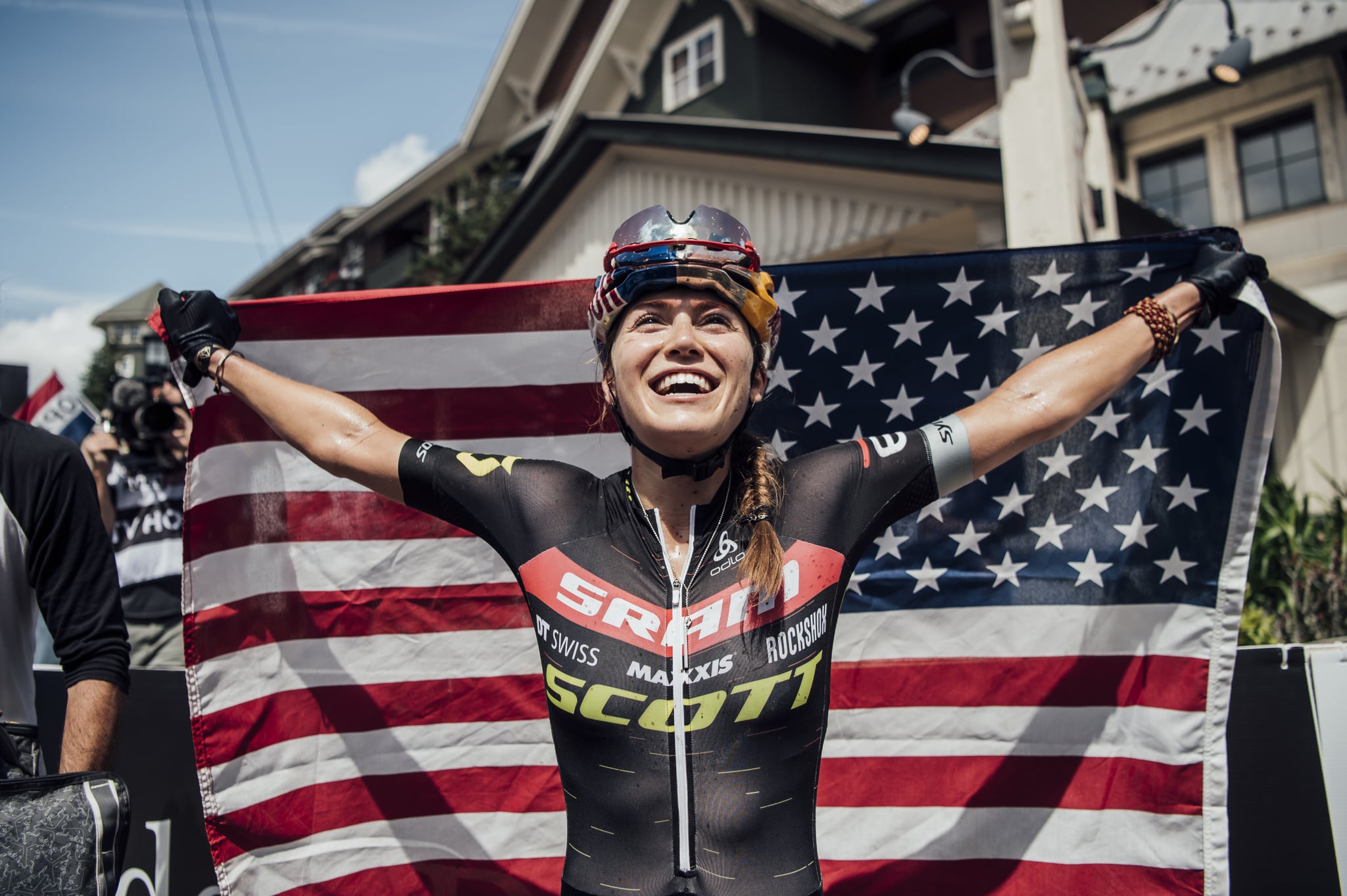 As Kate Courtney coasted across the finish line on Sept. 8, the celebration was already beginning. Twenty-three years old and in her second season as a professional mountain biker, Kate had just achieved something no American woman had done in 17 years: winning the overall World Cup in cross country mountain biking. And in front of a roaring American crowd in Snowshoe, WV, no less.

"It was an incredible moment," Kate said: the culmination of a long, grinding season. The overall title doesn't go to the winner of just one race (Kate actually came in fifth on Sunday); it's a measure of how well a cyclist performs over the course of an entire season, with athletes earning points based on how they place in a series of seven races. Each singular race consists of a set of laps around a short, physically and technically demanding course, bumping over rocks, chugging up steep hills, navigating through switchbacks and uneven terrain. The Snowshoe course? Just over two-and-a-half miles in length, with a vertical climb of 528 feet.

Kate had won the first three races of the season, putting her in the lead for the overall, before falling behind Swiss cyclist Jolanda Neff. In order to win the title, Kate had to beat Jolanda in this final competition. "The whole race was about knowing where I was in position and knowing where my other competitor was and trying to put as many riders between us as possible," Kate said. "It was a really tight battle. It was about fighting until the very end." The fifth place finish was enough; Kate leaped to the top of the standings and came out as the overall champion.

"I've had big wins on single days before," Kate told POPSUGAR. "But overall is something completely different. It requires a season of consistency and really racing at the top or fighting for every position for the entire season." The cheering crowds, the chants of USA, the flag draped around her shoulders: all were part of the payoff for the enormous amount of time and effort she'd put in through the whole season, weathering every high and low. "The overall is really special because it's accumulation of each of those races," Kate said. "It matters just as much that I fought for 17th on my worst day, as it does that I fought for the win on my best day."

Related:
How Katie Ledecky Overcame Illness and Surged From Behind to Win at the World Championships

Kate grew up playing sports: running cross country, skiing, horseback riding. It wasn't until high school, when she was looking for ways to cross-train that she decided to join her school's mountain bike team. "I think it really benefited me that I discovered the competitive side of the sport a bit later. I grew up riding just for fun with my dad," Kate said. "I fell in love with riding my bike first, and then I fell in love with racing my bike."

Kate signed her first pro contract during her freshman year at Stanford, and the next four years were a balancing act. She chose a challenging major, human biology, but said that working towards a degree while racing actually felt like a plus. "It really forced me to be a bit more balanced and to understand that sometimes, having things in your life that aren't completely focused on your sport can actually be a huge benefit to you," she explained, adding that the time management aspect was difficult, but a support system of people close to her helped her get through it.

After graduating in 2017, Kate now typically trains on the bike two to six hours a day, seven days a week, and hits the gym three times a week. "Mountain biking can be really full-body," she said. "It's obviously very leg- and quad-focused, but it's also about having a really strong core and upper body and coordination, so that I feel comfortable pushing hard on technical downhills."

The hours, days, and months of training paid off. Not only did Kate secure the overall World Cup title this season, but she also qualified for the 2020 Olympics along the way. "I'm so excited," Kate said. "It's been a lifelong dream for me." Cross country is actually the only mountain biking discipline you'll see at the Olympics — and an American woman has never placed better than third.

Kate said she's starting to focus on preparing for the Games, but she's also in her off-season, enjoying time off, hot yoga sessions, and "the other side of the sport that I love": long "adventure rides," taking on the trails around her home in Northern California. Part of that is building a "base fitness" for next season; part of it is just reconnecting with her passion for cycling.

"I have the racing and training really hard side of it, which for me is really motivating and often very challenging. And then sometimes, I just get to ride my bike for fun with my friends," Kate said. "To have both of these sides, it fuels both my love of the competition and my love of the sport."