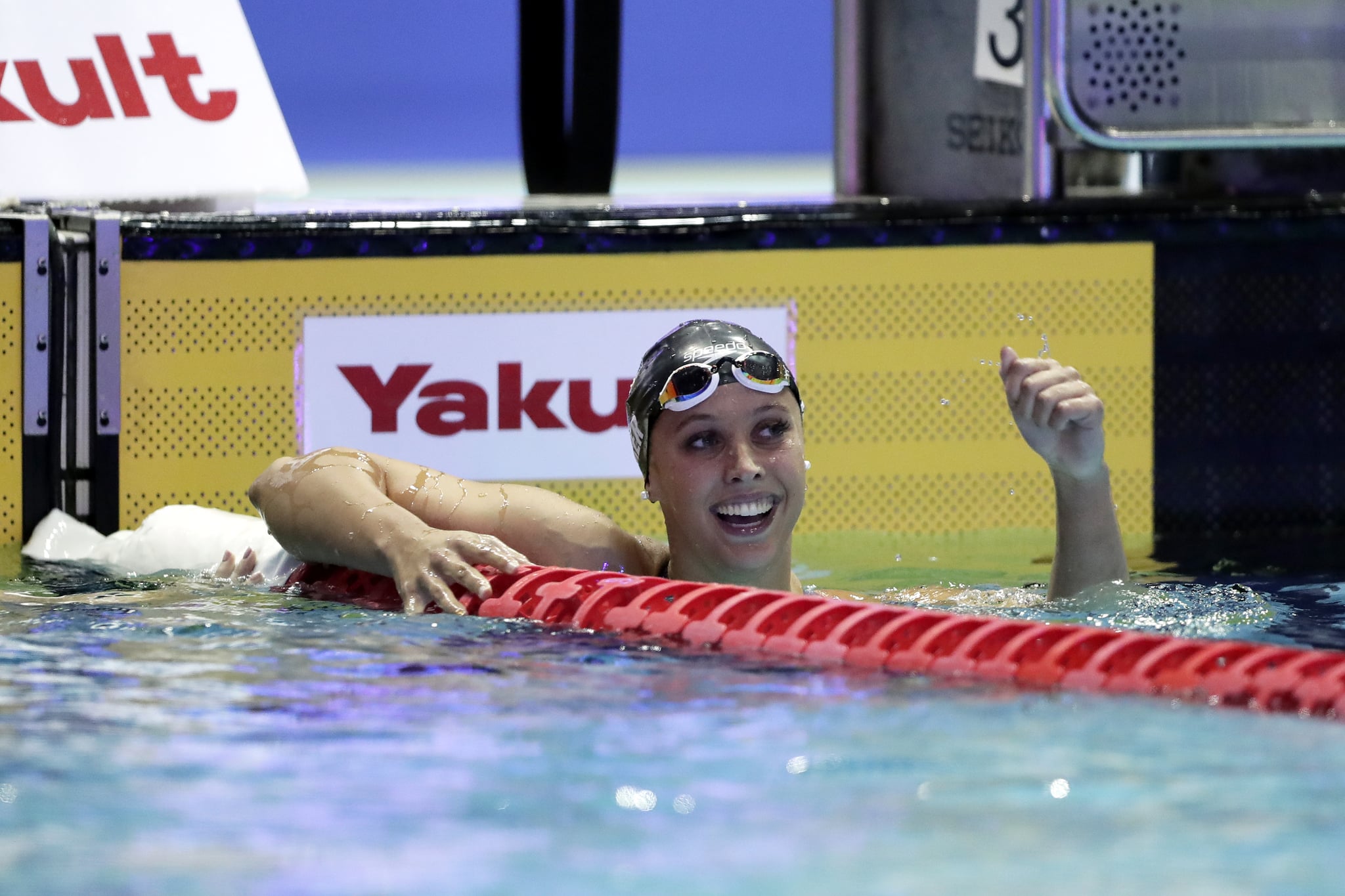 When swimmer Kathleen Baker started shedding pounds at the age of 12, she knew something wasn't right, but was hesitant to admit it. She was already an elite athlete at that point with not much weight to lose. "I ran fevers for weeks and weeks on end," Baker told POPSUGAR during an interview about her partnership with Hayward Pools. "I had pretty much every gastrointestinal symptom you could think of: diarrhea, blood in diarrhea, nausea, vomiting, heartburn, stomach pain." And, the longer she went without some sort of treatment or diagnosis, the worse she became. After a few months, in June of 2010 she learned that she had Crohn's disease.

"I went from breaking national age group records at 12 to not being able to do a whole practice due to straight up exhaustion and symptoms I was having," Baker explained of her Crohn's, which is classified as chronic inflammatory bowel disease (IBD) that can spread to any part of the digestive tract. It affects as many as 780,000 Americans. Getting the diagnosis was devastating for her. "I love swimming more than anything in this world, and I just couldn't comprehend why I deserved to have something like this, where I felt like my swimming was going to be taken away from me," she said.

"I realized that it doesn't really matter how hard I'm going to train if I'm not healthy."

Crohn's, however, didn't stop Baker from winning two medals in the 2016 Rio Olympics (gold in the 4x100m IM relay; silver the 100m backstroke). It didn't stop her from setting world records, either. She found doctors who she said supported her goals and understood that she was so much more than "just Kathleen with Crohn's disease," she noted. She had Olympic dreams, was a competitive swimmer, and also wanted to do things that teenage girls were able to do (aka, go to school and sleepovers, she said).

Being an elite athlete with Crohn's means that Baker has to take it easy during practice if she feels sick, and she goes through cycles of remission and flares. She said she typically will have about seven swim practices a week, while most high-level swimmers have nine to 10. "I realized that it doesn't really matter how hard I'm going to train if I'm not healthy," she told POPSUGAR. "All that matters is me being healthy, and if that means doing two less swim practices a week than everyone else, then that's what I'm going to have to do."

It's also a matter of managing her medication, and she's been on a few over the years, the first of which she said required her to be in the hospital every six weeks to get an infusion. Now, she has to give herself injections of medication into her stomach. Switching up treatment, she said, isn't easy. "That's a very big deal as a Crohn's patient. There are not a million medications in the pipeline and, at 17, I'd already burned through a couple of them. These are heavy-duty drugs," she explained. "They're not mild medications where you just take a pill and you're fine."

Baker has to be extra careful not to train too intensely, she said, because of her weakened immune system. "I go through phases where I push myself too hard, and usually when that happens I get sick, I flare up. I have a chronic illness that also suppresses my immune system, and I take multiple medications that suppress my immune system as well, so I have to worry about getting the flu, or how strep throat for me is not just something tiny. I'm in the hospital with 103-degree fever and IV antibiotics."

Being a swimmer with Crohn's has heightened Baker's awareness of water safety, something that Hayward Pools is a big proponent of, she said. "Ever since I was young, my parents have really instilled in me water safety, and it's something that we don't do as good of a job of in the United States as we could," she added, pointing to the high rates at which kids drown.

Baker has embraced that her life isn't normal and that's OK. "It's not going to be normal, and my normal is not someone else's," she said. She's proud to be a part of the Crohn's and colitis community (ulcerative colitis and Crohn's disease are the two most common types of IBD). She wants kids to know that they don't necessarily need to change their dreams because of their illness. "My path," she said. "has been amazing, and hopefully it continues going well."

Related:
This Is How Olympian Simone Manuel Is Staying Positive and Taking Care of Her Mental Health

When POPSUGAR first spoke to Baker, it was early March, and when she talked about her training schedule leading up to the Olympic trials, it looked a little something like this: seven swim practices, three lifts, and three physical therapy sessions per week. Then, she'd do "something fun" on her own such as going on a few longer walks or swimming in the ocean. Before the Rio Games, she swam with a college team, but prepping for Tokyo 2020 meant training with a group of professionals who were all eyeing the Olympics.

Of course, with the Tokyo 2020 Games postponed until next summer, things are different now. Due to the novel coronavirus pandemic, Baker told POPSUGAR when we followed up that it's been hard to adjust to a modified training schedule. "Every day I feel like it's something new," she said. She's been able to lift weights in her garage and swim in a 22-yard outdoor pool owned by someone she knows. Along with that, she's been going on walks, running, taking Zumba classes on her TV, and practicing TikTok dances.

"Most athletes everywhere are still struggling with the fact that they've had this huge sense of purpose in training for the Olympics, and now everything has been put on hold."

Baker still has her sights set on qualifying for the Tokyo Olympics in more than one event and winning a medal to add to her previous accolades. "I'm using this time to really focus on some of my weaknesses out of the water and being creative when I get a chance to train in the water," she said. "I am trying to focus on the little details right now because I'm not getting huge blocks of aerobic training in."

Though she admits that it's "devastating" knowing the Olympics aren't happening as previously scheduled, Baker said it was the right decision to make. "At the same time, most athletes everywhere are still struggling with the fact that they've had this huge sense of purpose in training for the Olympics, and now everything has been put on hold," she explained. "I am using this time to fill my cup up and still have some joy when everything is not normal anymore."