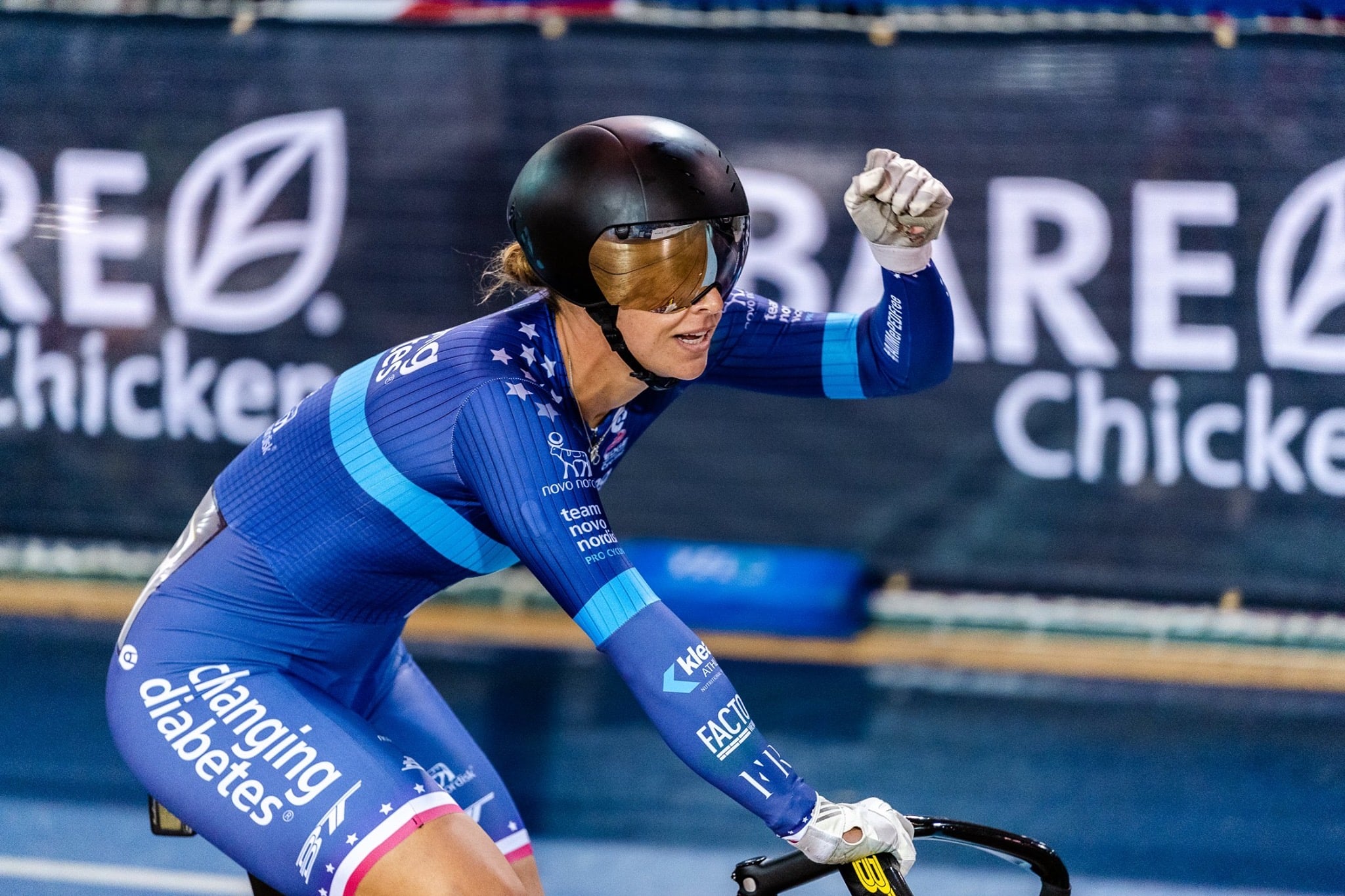 When sprint track cyclist Mandy Marquardt was diagnosed with Type 1 diabetes at age 16, a doctor told her that her dream of competing at the elite level wasn't attainable. That, however, didn't stop her in the slightest. Now, she's a two-time US national record holder, an 18-time US national champion, and a member of the Team USA World Cup since 2014.

Marquardt, 28, began endurance cycling when she was 10 and officially made the switch over to track sprinting in 2014 after graduating from Penn State, telling POPSUGAR that she's more built for the strength and power side of cycling. The discipline of the sport attracted her the most — there's so much room for error and you train hours upon hours per week leading up to a competition, where you go full out for incredibly short races. And the fun of it, she said, is worthwhile.

At the time of Marquardt's diabetes diagnosis, she was living in Germany and her end-of-year testing showed she had elevated blood sugar levels. She was in the hospital for two weeks after that for more tests, but said she didn't have any noticeable symptoms she was concerned about prior. "It just felt like my whole world turned upside down because I was not sure if I was going to still be able to train or do the same things," she explained.

A doctor told Marquardt high-level racing was out of the question, and she recalled that the doctor never really specified why. But she can speculate: there are many stressors that a competitive athlete deals with, and having Type 1 diabetes might be a disadvantage. It really does take a lot of management, she said. The basics involve relying on insulin injections and readings from her continuous glucose monitor.

After Marquardt was diagnosed, she moved back to Florida to live with her mom and worked with an endocrinologist there on figuring out the right foods to eat to help manage her blood sugars. (She stays away from processed foods, for example, and still gets carbs through fruits and vegetables.) Diet is something she continues to focus on while training, especially since protein, fiber, and carbs are important to eat as an athlete and she wants to keep her power-to-weight ratio at a good range on the bike, she said.

"I just go for things that I do not have to take as much insulin for," Marquardt told POPSUGAR. "That has also been helpful for me to manage my weight. Everybody is different in that way, but with all the training that I do, it is just important that I am fueling and keeping my weight stable." She continued on to say that, in general, being an athlete is hard, but having diabetes on top of it is even harder. She's constantly monitoring her blood sugars, communicating with her coach about how she feels, and factoring in stress and time zone changes.

Marquardt also represents Team Novo Nordisk, which is made up entirely of athletes with diabetes. It's given her a platform to talk about her diagnosis as well as a community of people who relate to her — and that, she noted, is key, especially for younger athletes with the same diagnosis.

Along with Team Novo Nordisk, Marquardt has also been involved with nonprofit Beyond Type 1 for several years now. "It's important to me that other people living with Type 1 diabetes know that they can continue living a 'normal' life after their diagnosis," she said. "Beyond Type 1 is an incredible organization through which people with diabetes can connect, share inspirational stories, seek practical help, and find industry news."

What a Postponed Tokyo 2020 Olympics Means For Mandy Marquardt

Marquardt told POPSUGAR that qualifying for the Tokyo 2020 Olympic Games in sprint track cycling was a two-year process that was able to wrap up just before the COVID-19 pandemic canceled sporting events. "We had qualified as a nation, and so there are still quotas and selections to be made," she explained, adding that though she's had one of her best seasons yet, the Olympics being postponed a full year makes the selection process even more in-depth.

There are five Olympic track cycling events and, of those, three sprint cycling events: Keirin, an eight-lap race that begins with a speed-controlled start; Match Sprint; and Team Sprint. "My teammate and I used to compete in the Team Sprint, but with our strengths and goals, we decided to compete individually in the Keirin and Match Sprints," Marquardt explained, further noting that there are a lot of unknowns at this time.

"Right now, I am not exactly sure what I am training for," Marquardt said. "I am just continuing to train because I have put in all this hard work and I do not want to lose that momentum." She's sticking with a routine as best she can — while her indoor track is closed, she's been able to train at home and do outdoor cycling — and she wishes to put that power to good use, whether she makes it to the Olympics or not. "I just know that I am still young in my sport, and as long as the support is there and I am still able to compete and be competitive and it makes me happy, then I am here for it and I am going to continue."

Marquardt added, "I have always known, even before I was diagnosed, that I was an athlete, and I wanted to be something and strive to be really good at a sport." She found that with sprint cycling, and she just so happens to do what she loves as a person with diabetes. Through it all, she wants to prove to herself that "as an athlete, period" she can go to the Olympics. "And even with diabetes, I am capable of that."