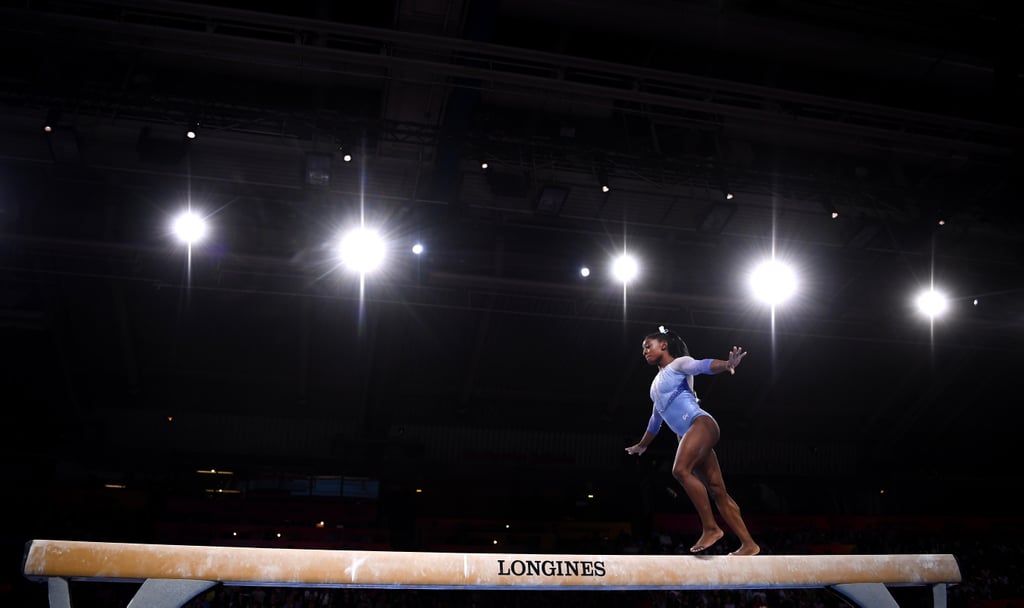 You might have heard that Simone Biles did her double-twisting double dismount off beam in the qualifying round of 2019 Worlds on Oct. 5. If you haven't, know that it's two flips and two twists in a tucked position. In simple terms, it's very hard to do and no one has ever done it in competition — until Simone, of course. It's now officially dubbed "The Biles" and will soon be in the gymnastics rulebooks forever.

To go over the basics quickly, in order to get a gymnastics skill named after you, you have to submit it to the FIG Women's Technical Committee, then proceed to land it at a major competition such as a World Championships. It's given a value — these range from A (one-tenth of a point) to J (one full point, thanks to Simone's triple-double on floor, now called "The Biles II") — and added to the FIG Code of Points bearing your name. Those are the basics, but since FIG released the value for Simone's new dismount, it has stirred up controversy.

The FIG Women's Technical Committee gave the double-double dismount an H value, meaning eight-tenths of a point. Right away, Simone took to social media to say it was "bullsh*t." One reason is because her dismount is only worth one-tenth higher than a full-in on beam, or a double tuck with a full twist. As one Twitter user whom Simone has retweeted a number of times accurately explained, a double tuck off of the beam is worth a D, or four-tenths of a point. The full-twisting double tuck is worth seven-tenths, or a G. Following that pattern, Simone's dismount should be three-tenths higher, or a J, because it adds another full twist. Instead, it was given a value one-tenth higher. That may not seem like a huge deal, but it's about being rewarded for the risks you take. In fact, the National Women's Technical Committee gave Simone's double-double dismount an I value, or nine-tenths of a point, when she performed it at Nationals this year.

Cheryl Hamilton, internationally qualified judge and chair of the National Women's Technical Committee, spoke to POPSUGAR back in August and said that she predicted Simone's double-double dismount would be worth an I at Worlds, too, since her Technical Committee (on the national level) gave it that value at Nationals. In addition, she explained, the same move on floor, a double-twisting double, is worth an H on that event, but it's even harder to do as a dismount off beam.

As a former gymnast, I know what it's like to attempt difficult skills (none nearly as difficult as what those on the elite level are doing, but elements that challenged my ability as an athlete). The harder the skill, the more risk. With risk comes reward — your level of difficulty is higher, and so are your scores if you execute your routines well. You want to make sure that you're being awarded a fair number for what you're performing, though FIG described the value of Simone's dismount as "reasonable." That brings up another big source of the controversy: FIG's response.

The FIG Women's Technical Committee basically said The Biles was too dangerous of a skill to warrant a value any higher than what they gave it. A statement released by them on Oct. 4 read, "In assigning values to the new elements, the WTC takes into consideration many different aspects; the risk, the safety of the gymnasts and the technical direction of the discipline . . . There is added risk in landing of double saltos for beam dismounts (with/without twists), including a potential landing on the neck."

The statement went on to name the "handspring — double salto fwd on vault" as another example of a skill that the Technical Committee allegedly decreased the value of due to risk. Note: this is a front handspring onto the vault with two front flips off, first done by Russia's Elena Produnova. There's a blind landing, and you're essentially doing even more than two flips since you have to rotate off of your hands to get into that initial tucked position in the air.

Furthermore, the FIG Women's Technical Committee said their job is to "ensure the safety of all athletes around the world and decisions are not based purely on one gymnast." Officials at USA Gymnastics responded the same day with a statement of their own, voicing their disapproval and saying they "respectfully disagree." It read, "The safety of athletes is always a top priority for us and the sport in general, however we believe the skill should be given the value it merits."

One Twitter user pointed out that FIG's statement is contradictory since FIG officials, who claim to be focused on safety, reportedly wouldn't let Danusia Francis put an extra mat down for her dangerous beam dismount. Danusia is a former UCLA gymnast who, at 2019 Worlds, officially became the second person to qualify to represent Jamaica at an Olympic Games in gymnastics. Her dismount consists of a side aerial done sideways along the width of the beam instead of forward along the length of the beam (she could very easily miss her foot, and you can watch her do it here). Though Danusia has not commented on that specifically, she did retweet Simone's own tweet on the matter.

Simone said of FIG's decision about The Biles, according to NBC Sports, "It's so unfair, because, am I in a league of my own? Yes, but that doesn't mean you can't credit me for what I'm doing. They keep asking us to do more difficulty and to give more artistry, give more harder skills. So we do, and then they don't credit it, and I don't think that's fair." She also pointed out that giving the skill an H value would make gymnasts less likely to try it. Giving it a J value would at least, she said, be something they'd likely "shoot for."

Here's my take on it: the FIG Women's Technical Committee encourages safety, yes? Traditionally, the harder the skill, the higher its value in the Code of Points and the more intimidating it is to try. Why, then, would FIG make The Biles an H value that potentially seems easier than it might be for gymnasts to perform successfully? That being said, Simone's new dismount is still the highest-valued element on beam right now, meaning this H value isn't "easy" at all per se, but it's caused quite the stir regardless. For more on this controversy, you can read through the tweets ahead. Whatever your stance on the final value of the move, The Biles is history-making. Simone has proven that she can raise the bar of gymnastics time and time again. And when you don't think she can raise it any higher, she pushes it miles upward — and then some. This should be rewarded.