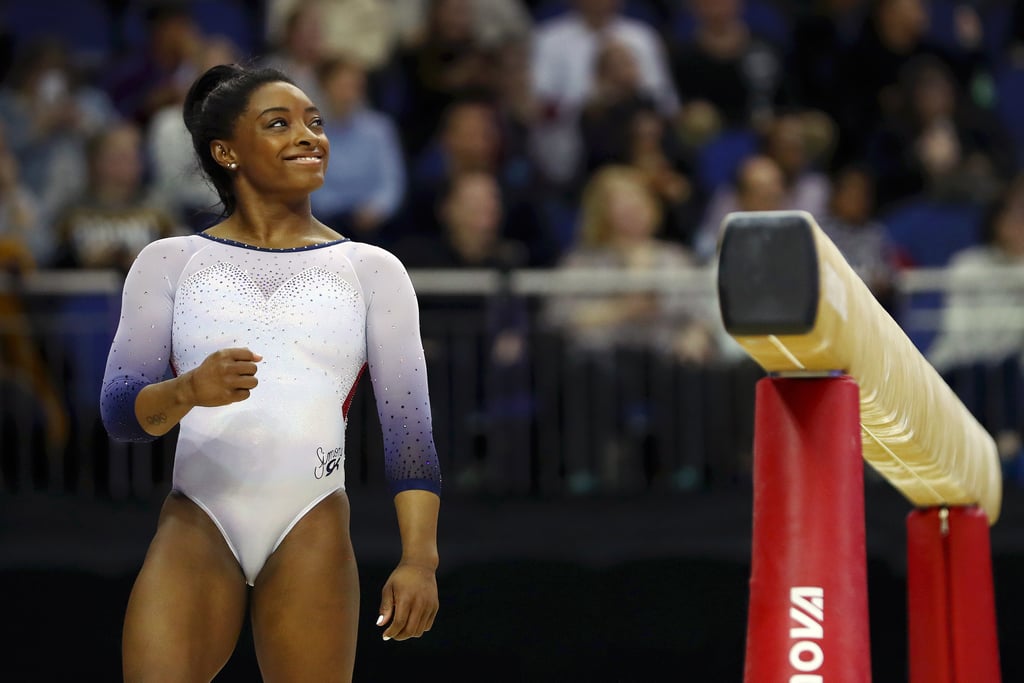 One of my favorite lines in the film Stick It goes, "The only reason I'm doing these tricks is because somebody, somewhere said, 'I don't care if this is nuts, and I don't care if it hurts. I'm doing it. I'm gonna climb this insanely high mountain. Watch me.' And when you're the first to climb a new mountain in gymnastics, they name it after you." Haley (Missy Peregrym) was right. As you might have heard, Simone Biles continues to make history not only with her six-year winning streak, but also with her dynamic moves that have never before been successfully done on the world stage. She already has two skills named after her — The Biles on floor and The Biles on vault — and there's more to come.

In order to have a gymnastics skill named after you, per the FIG Women's Artistic Gymnastics Code of Points, you need to perform the skill without falling at a World Championships, an Olympic Games, or a Youth Olympic Games. You also need to be the only person to land that skill for the first time; if there's more than one gymnast landing it in any of those competitions, then the element will be added to the FIG Code of Points without anyone's name attached.

In gymnastics, each skill is ranked by difficulty starting at an A, which is worth one tenth of a point. In order for any move to be added to the FIG Code of Points as a new skill bearing a gymnast's name, it needs to be at least a C in difficulty, worth three tenths (the FIG Technical Committee comes up with these values). The first skill that was named after Simone, The Biles on floor, is a G skill. It's a double layout with a half twist. We saw her add a front layout to that move at the 2019 GK US Classic in July, but according to the women's gymnastics staff from USA Gymnastics, even though Simone added onto this move, its value won't change in the books. Instead, Simone is rewarded with bonus tenths. That goes for any addition to a new skill already in the FIG Code of Points.

Related:
I Did Gymnastics For the First Time in 5 Years and Remembered How It Felt to Conquer My Fears

Until a new skill is in the FIG Code of Points, it needs to be assigned a value for scoring in competition — which is why Simone's triple-twisting double was given a value at the US Gymnastics Championships in August, where she competed it for the first time. If she lands it properly at the 2019 World Championships in October, the triple double will most likely be worth a J, or one whole point, according to Cheryl Hamilton, who attended the 2012 and 2016 Olympics as a judge and is internationally qualified. She told POPSUGAR that, as chair of the Women's National Technical Committee, she and two others — chair of the International Elite Committee Kelli Hill and USA Gymnastics's representative to the FIG Women's Technical Committee Tatiana Perskaya — were the people to determine that J value.

Cheryl admitted that the skill is so good that they had to surpass H and I. As for next steps, it would then need to be submitted to the FIG Technical Committee at Worlds this year, if landed correctly, to get an official value. It would be named after Simone (called, "The Biles II") and would go into the FIG Code of Points for women's gymnastics. In comparison, Simone's never-before-competed double-twisting double dismount off of beam — which is, in simple terms, two back handsprings connected to a back flip with two twists and two flips — could get named after her as well and would be worth an I, or nine tenths, Cheryl said.

Simone has therefore climbed that insanely high mountain in gymnastics with not only medals to prove it, but also her name in the rule books. Of that very first skill bearing her name, Simone said in 2015, "That's really cool to have something named after me and have it stay in the history of gymnastics, but it's kind of weird because every time I do it, I say, 'Oh, I'm gonna do a double lay half out.' I never say, 'Oh, I'm gonna go do The Biles.'" (Note: "double lay half out" is the same thing as a double layout with a half twist.) Ahead, check out examples of skills named after some of history's greatest gymnasts. They're high-flying and permanently etched into the perfection-seeking, always-impressive sport.

Related:
The 1 Thing that Helped Simone Biles Become the GOAT (and It's Not About Her Skills)
Previous Next Start Slideshow
WorkoutsSimone BilesGymnasticsAthletes

by Emily Weaver 35 minutes ago