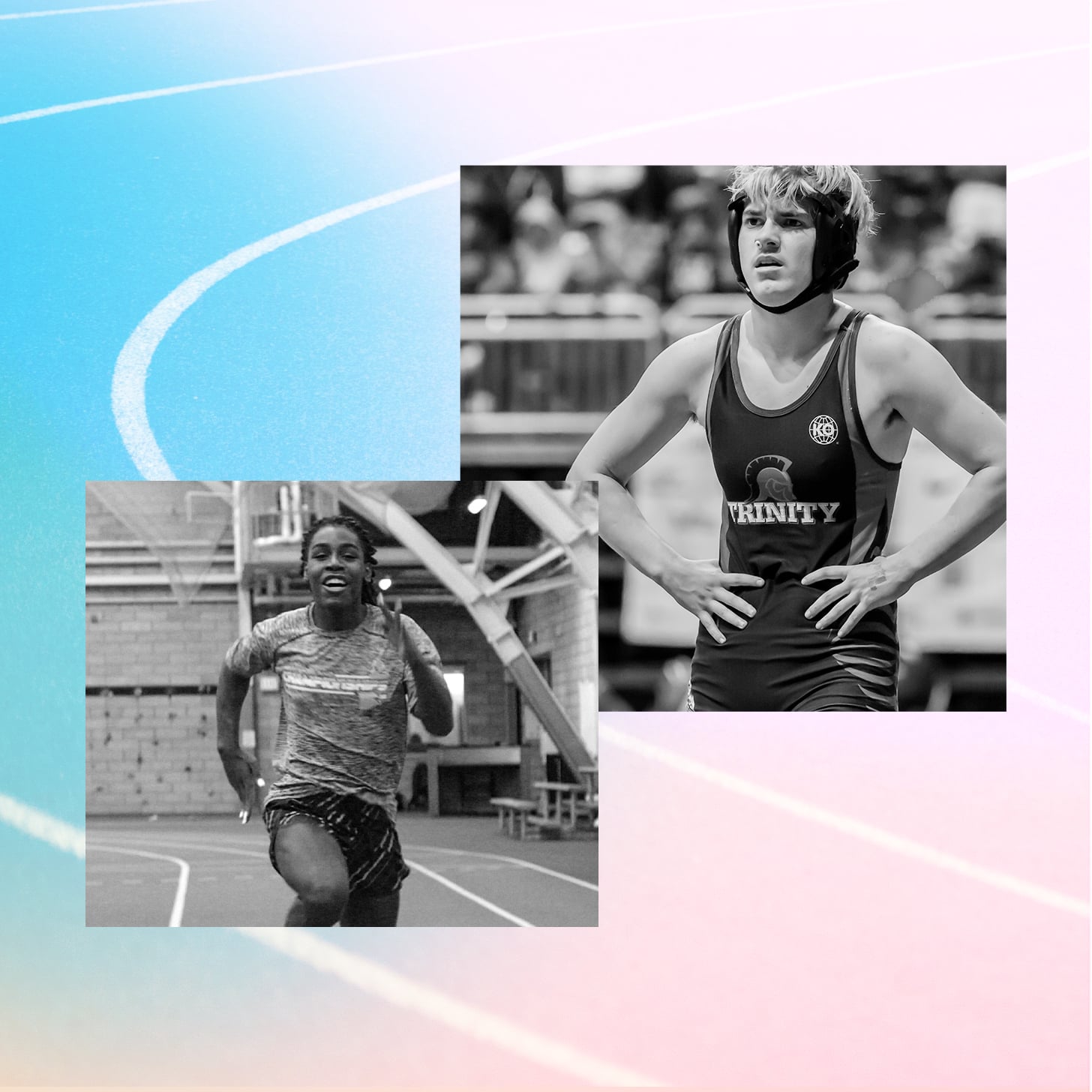 POPSUGAR presents: Pride Revolution — a series celebrating the beauty, brilliance, and resilience of the queer community. LGBTQ+ Pride has always been revolutionary in nature, pushing society's boundaries to be more accepting, more affirming, and more inclusive. As pride grows to permeate pop culture, revolution is as necessary as ever to ensure that safety, equality, equity, and inclusivity remain at the center.

Sports should be for everybody. Their positive impact on kids and adults alike is undeniable. They help young people build community, learn self-discipline, and build self-worth. Sports have been linked to a decreased risk of cigarette smoking, heart disease, and diabetes. "And it's fun!" Mack Karam Beggs, a former high school and college wrestler, adds. "Maybe there's nothing more to it than it just being fun and giving you a goal to achieve every single day."

The obvious benefits to participating in sports are just one reason laws and policies that target trans athletes are so infuriating and why increasing numbers of people are speaking out against them. Earlier this month, the families of two teen girls in Utah filed a lawsuit that challenges a state law that keeps trans women off school sports teams, stating that the ban is "based on unfounded stereotypes, fears, and misconceptions" and not backed by "medical or scientific evidence," according to CNN. But there's a long way to go. As of May 2022, 17 states in the US had what education organization GLSEN refers to as "friendly" policies that fully allow trans and nonbinary students to participate in school sports. Three states allow participation only for students who've undergone surgical transition; 19 have policies in place that exclude or challenge trans and nonbinary students from participation; and 10 have no specific statewide laws in place.

One thing that can get lost in all the talk about legislation and policy is the humanity of the people being affected — in this case, young adults and children. In 2021, Hulu released a documentary called "Changing the Game," which follows trans high school athletes as they try to participate in their sports at school. Their experiences varied widely and were largely informed by where they lived. POPSUGAR caught up with two of the athletes featured in "Changing the Game" — Andraya Yearwood, a track and field athlete, and Beggs, a wrestler — to discuss why sports can be life-saving, especially for trans youths. They also share what they wish more people knew about supporting trans athletes.

POPSUGAR: Can you describe your sports background? When did you begin participating, which sports did you play, and how long did you participate?

Andraya Yearwood: For as long as I can remember, I have always been a very involved and active child, especially when it came to athletics. Throughout my childhood, I have played football and soccer, danced competitively, and also ran track. I remember really enjoying the girls with whom I cheered my freshman year of high school, too. But I think I really came into my love of sports once I joined the track and field team in high school the following spring semester.

Mack Karam Beggs: I've participated and played in sports for as long as I can remember. I was really good at softball and played for six or seven years. I did dance — ballet, tap, modern, hip-hop. Gymnastics. I tried playing football, but my junior high coach was not for females playing on the males' team. I did basketball. I even did pole vault. I knew I had to hone down on one sport when I got into high school. So I was like, wrestling is it. I fell in love with it. More recently, I've been working on my own project — I'm trying to host my own totally inclusive MMA debut, where hopefully I could get some of these kids who are in these states where they are not able to compete into combat sports.

PS: Why are sports important to you personally?

AY: They allow me to be myself and to exist in a judgment-free space — at least in practice, that is. Even though my athletic career in high school has been such a whirlwind of highs and lows, ups and downs, I can definitively say that my experience with sports has made me into the strong trans Black woman who I am today. However, I could not have been as strong as I am now without the immense support from my teammates and coaches. If I had gone through with giving up track and field my junior year, I would have missed out on so many amazing friendships and support systems that turned out to be such instrumental parts of my life, both in and out of sports.


"I can definitively say that my experience with sports has made me into the strong trans Black woman who I am today."

I [also] learned so much from playing all the sports that I played. Soccer taught me how to collaborate with my teammates and how to work together as one. Football taught me hand-eye coordination and how to think quickly in times of uncertainty. Sports teach youth a plethora of lessons that they will be able to use in their everyday lives in all of their respective capacities.

MKB: There's something about working out. It's good for your body, and it's good for your mind. Playing sports definitely helped off the mat or off the field, too. Wrestling taught me that work-ethic type of mindset, that there are no excuses. That you work for everything in your life, and what you get depends on how much effort you put into it. I've carried that mentality with me since I was 15 years old, and it's definitely life-saving. I don't know what I would do if I didn't have sports, if I didn't have the power to just play.

PS: Why is it so important for transgender kids and young adults to be able to compete on the right team in their chosen sport or sports?

AY: It is so important for transgender kids and young adults to be able to compete on the right team in their chosen sports because it allows them to feel included and connected with their peers. Exclusion is never OK, especially when it comes to kids and young adults just wanting to be themselves and have fun with their friends. The inclusion of transgender and nonbinary students not only improves their athletic performances, but their academic performances improve as well. Transgender youth have more positive experiences in school due to them being able to participate in the sport in which they are interested. Furthermore, transgender kids were less likely to contemplate suicide when there was more gender-inclusive participation in sports. They felt much more accepted among their peers and were able to exist in a space in which their identity wasn't being questioned.

MKB: Overall, it's very good for your mental health. It was very confusing for me when I was competing on the women's team, like why can't I compete against the men when I was beating men? When I competed on the men's team in college, I never felt happier. I felt like I had more free will, I felt more connected to the team, I felt everything overall positive about just who I was. It solidified the fact that this is it, this is what I needed, and I'm glad no one's going to take that from me.

PS: Is there anything you'd want to say to trans kids right now who might be living in a state that has laws banning them from participating in the sports league that's consistent with their gender?

AY: Find community. The community that I surrounded myself with during those four years of high school really helped me keep a positive mindset through all of the adversity and negativity. Finding a community that will make sure you are loved and appreciated will really help to keep your head up. In this community, you can create relationships and connections with people who are there to support and encourage you. Also, these connections that you make may help to generate new ideas and new courses of action. You're able to bounce ideas and perspectives off of each other and come up with potential solutions to combat the legislation that is preventing you from participating on the team with which you identify. By creating community, you will be much more empowered and supported in the problems that you face, making it much easier to find solace and hope.

MKB: Don't stop playing. Go ahead and compete in the gender that you don't identify as, if that's what it takes right now. Do whatever they say to do because we're still going to be here fighting for our rights. I know there's that mental barrier that tells you, "Maybe I shouldn't because of who I am." But if these are the cards we've been dealt during this time, then so be it — it's not going to be that way for long. So many [people] are advocating for [you], and we're not going to let legislators push these kids around. [I'd want them to know] that they have somebody in their corner, that they're not alone.

PS: Is there anything else in general that you'd want readers to know about young transgender athletes?

AY: One thing that I want readers to take away from this article is that transgender athletes are just athletes. Not cheaters and not monsters. We are not trying to ruin women's sports, nor are we going through years of transition solely to win a few medals. We are no different than any other person just wanting to participate in the sport that they love. Such a large portion of the conversation around transgender inclusion in sports lacks a very fundamental piece that is crucial to the conversation: trans people are just people. We are not just our biology. There is so much talk about biology when it comes to trans athletes but never as much about us as humans. As people. When legislators and lawmakers continuously dehumanize trans athletes over and over again, it begins to create this very harmful rhetoric around how we identify and ultimately how we live.


"There is so much talk about biology when it comes to trans athletes but never as much about us as humans. As people."

MKB: There definitely needs to be a promotion for allies and people being supportive even if it's in the smallest way. I had a teammate who was not so good to me my third year. At one point, he purposefully injured me. After that, I ended up having a conversation with my coach, who agreed that this situation wasn't OK, and he fully addressed it. And that made me feel good to know that there were people in my corner. I wasn't just someone who looked good on paperwork for a college; he actually genuinely cared, and that was nice. I'd also add just that these kids are loved — that you're loved, and you're not alone. God knows I felt alone. But we're here.