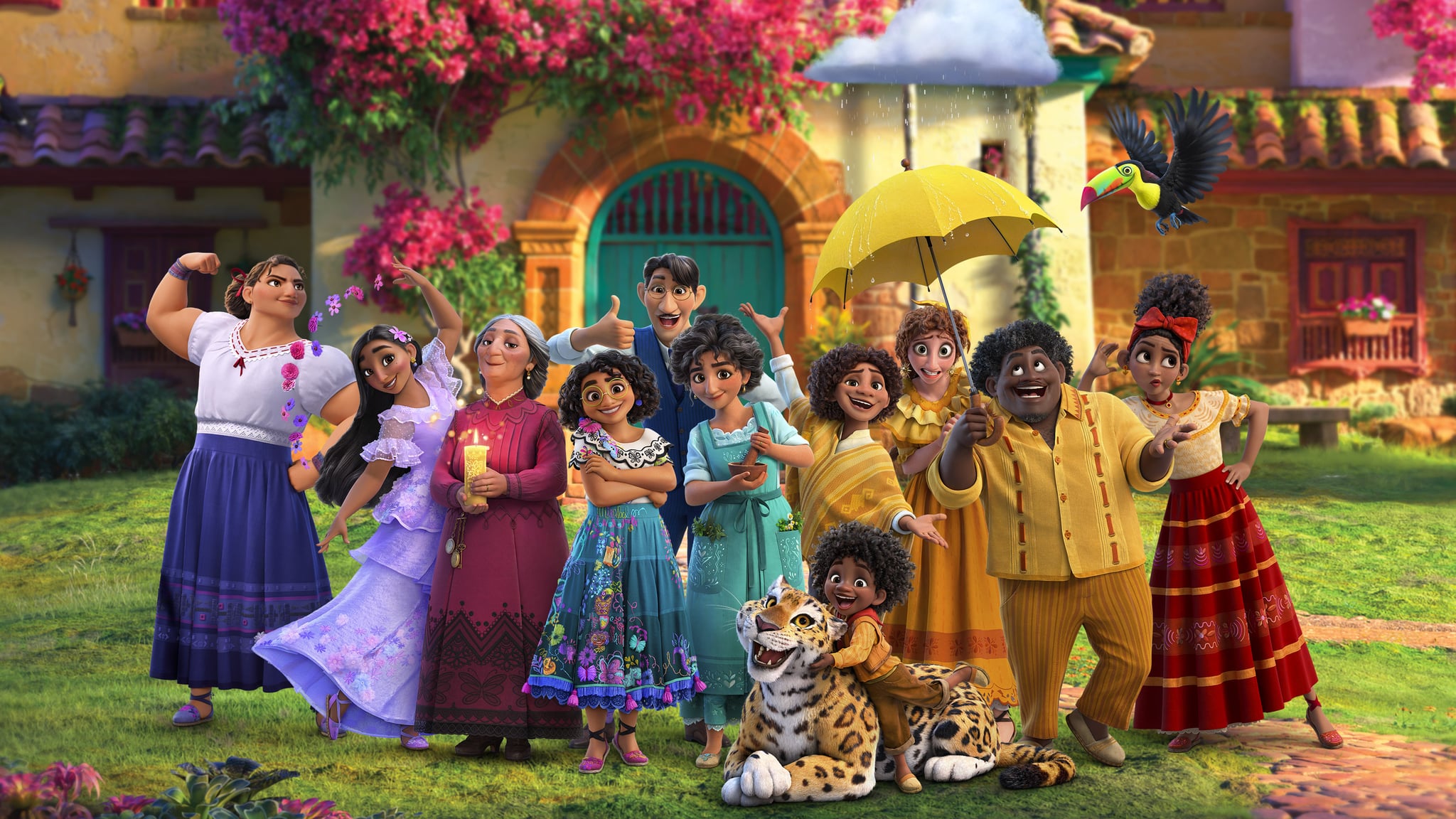 There's been a lot of joy, excitement, and orgullo surrounding Disney's latest film, Encanto. The animated movie, which releases on Nov. 24, is set in Colombia and tells the story of a young woman by the name of Mirabel, who fights to find acceptance from her magical family that lives in a big magical house. Featuring music by Broadway star and composer Lin-Manuel Miranda, the film is exactly what every Latinx adult would have loved to see growing up. It not only centers around a Latinx family but it also celebrates Colombia's immense diversity – something we rarely, if ever, see in mainstream films today.

Not only does it portray a refreshingly positive image of Colombia, but it also showcases the racial diversity that exists within the community while celebrating its music, food, and rich culture. Like Disney's Coco, it taps into Latinx spirituality‚ only this time it confronts the stigma. In Coco, which centers on the sacred Mexican holiday of Día de los Muertos, the focus is on connecting with ancestors. But in Encanto, there's magic in the house, and while it's believed to originate from the family's matriarch's (Abuela Alma) miracle, there's a clear distinction regarding what's perceived as "good magic" and what's perceived as "bad."

Warning: This may consist of spoilers.

Mirabel's Tío Bruno, who is referred to as a spiritual intuitive, medium, or psychic, gets visions regarding what's to come in the future. Because of these, he was ex-communicated from the family years ago, after Abuela Alma became convinced that his visions caused bad things to happen to the family. Mirabel, who is also treated like the family's outcast, doesn't think she possesses any gifts, but in many ways she is just as intuitive as her uncle. The irony is that both Tío Bruno and Mirabel are actually imperative to the stability and success of the family, but it takes Abuela Alma quite a while to finally see and accept them.

While the messaging is pretty subtle, the film definitely touches on how heavily stigmatized Latinx spirituality is and the discrimination folks who are spiritually intuitive or gifted have often experienced. Psychics and mediums are often demonized, especially in animated children's films. They often are portrayed as the villains, while in Encanto the issue wasn't with Tío Bruno's spiritual and visionary gifts but more with Abuela Alma's fears associated with them. Even today these stigmas still very much exist, but we've made progress — and the fact that this film leans into that, even if it's in a very small way, is major. Representation really can make a difference in terms of how people are portrayed and treated in society.

"This is huge for our community and something I am looking forward to seeing more of. Positive representation can influence the way we perceive ourselves, our community, and what is possible for us," said Yaqui Rodriguez, a Dominican American curandera, intuitive guide, spiritual counselor, and founder of Wave of Healing. "It can give an increased sense of self-worth and pride. We have seen how lack of representation impacted many of us growing up, especially when it comes to beauty standards being very Eurocentric and something we are still battling to this day."

Rodriguez emphasized how spirituality being normalized in the film, with Abuela Alma eventually accepting it as a gift, is so significant to the collective because so much of our ancestral practices and beliefs are still so heavily stigmatized in and outside of our communities. "I think it opens people up to question what we have been conditioned to believe about our own cultures, and this is a good starting point," she said. "To say, 'What if these things are not evil, what if there is more to these practices,' and start to educate and research things instead of perpetuating long-term cultural biases and fears. There is a lot to dissect when it comes to decolonizing spirituality. It's not as simple as blaming a specific group of people, as I've seen become popular on social media. There is a lot of intersectionality."

There's no arguing that diversity of all kinds in film is crucial. Children especially need to see themselves portrayed in films. And just as importantly, these portrayals need to be positive and uplifting — not perpetuating stereotypes. The fact that Encanto showcases a family unit that consists of diverse racial makeup, skin tones, hair textures, body types, and stories is something none of us saw growing up. But the diversity goes behind race and skin tone. It portrays a young Latina as a heroine and touches on the intersections and nuances that exist in our communities, such as stigmatized spirituality. But instead of villainizing it, Tío Bruno's visions and Mirabel's gift turns out to be exactly what the family needed to survive. Let's not underestimate the power of representation. It's real!