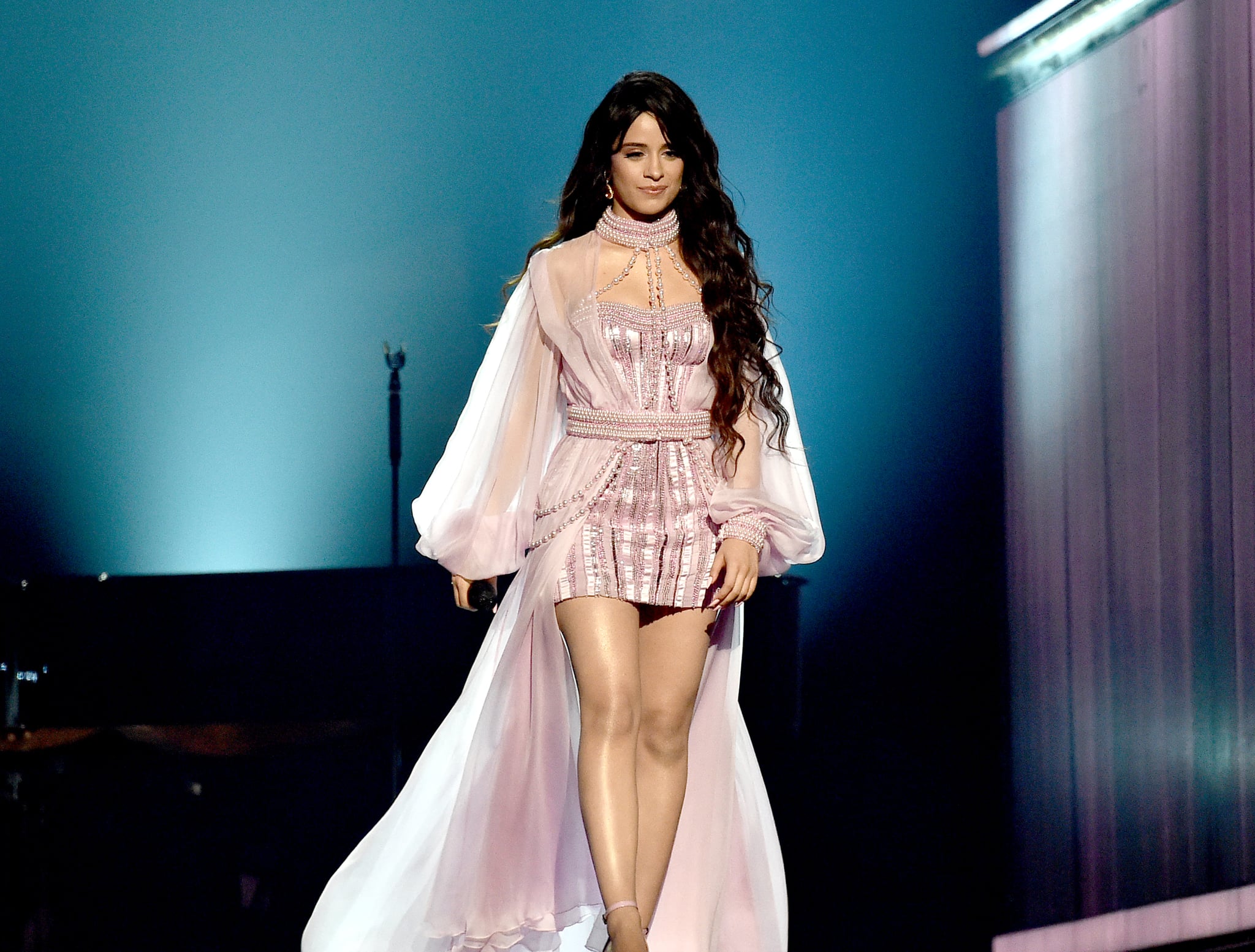 When it was first announced that Camila Cabello would play Cinderella, my initial thought was, "Damn, those are big shoes to fill." Cabello is following the legacies of previous women of color who have played Cinderella, like Brandy in the 1997 version coproduced by Whitney Houston and Dominican actress Dania Ramirez in Once Upon a Time. While I am happy to see another Latina get the role, I'm also equally concerned due to the singer's very public problematic past.

For those of us paying attention, Cabello's racist past is no secret. In 2019, a Twitter user posted archived Tumblr posts of Cabello not only using the N-word but also sharing racist posts reportedly from 2012 that featured offensive language, photographs, drawings, and stereotypes.

In 2016, Cabello's former Fifth Harmony bandmate Normani was targeted by racist bullies online after Cabello's fans believed Normani had slighted her by calling her "quirky." Trolls posted death threats, called her racial slurs, and Photoshopped images of her being lynched. Cabello let the bullying go on for days before addressing her fans. In 2020, Normani came forward to speak about her hurt and disappointment over the situation in a Rolling Stone interview.

"It was devastating that this came from a place that was supposed to be a safe haven and a sisterhood," she wrote. "It took days for her to acknowledge what I was dealing with online and then years for her to take responsibility for the offensive tweets that recently resurfaced. Whether or not it was her intention, this made me feel like I was second to the relationship that she had with her fans."

Now we have blackface accusations from her July 23, 2021, performance of her new song "Don't Go Yet" on The Tonight Show Starring Jimmy Fallon. One dancer wore a bright purple shirt and a deep "spray tan" with lighter makeup around his eyes. The dancer even posted photos with a Black woman emoji to describe his look.

Cabello took to Twitter to respond to the accusations. "So this dude was just supposed to be a white man with a terrible spray tan," she tweeted. "We purposefully tried to pull together a multicultural group of performers, the expectation was not that everyone in the performance needed to be Latin. There are white people, African American people, Latin people, etc. and so the point wasn't to try to make everyone look Latin either. There are a lot of people in the performance who are not."

For me, this is more so a lesson on how Latinxs need to take the necessary steps to better understand and address their own racial biases, because YIKES!

At this point, it doesn't really matter what her intention was, because regardless of what we intend, the outcome and impact are what we actually did. For me, this is more so a lesson on how Latinxs need to take the necessary steps to better understand and address their own racial biases, because YIKES!

Latinxs are not a monolith. Our communities consist of various races and cultures, y'all. The issue for many of us is that we are both racially and culturally socialized to be the colonizer and colonized. What do I mean by this? I mean that this can make it difficult for people to get on board with confronting racial biases because on the one hand we still experience racism and prejudice in different degrees, either by race, how we present physically or phenotypically, immigration status, socioeconomic status, gender identity, or sexuality — the list goes on and on. However, on the other hand, we can still marginalize and harm others with whatever degree of privilege that we do have, regardless.

Whether we like to admit it or not, it's a complex historical issue that has still not been fully accepted or addressed and that goes back hundreds of years to when the Spanish began killing, enslaving, and raping their way across the Caribbean and North, Central, and South America. The Casta System created 22 classifications of people based on various racial combinations and was so effective that many of us still use cringey colonial terms like Mestizo and Mulatto. We also rely heavily on the Mexican Mestizaje Ideology that was created after the Mexican Revolution. It was a way to leave behind the old colonial identity and redefine the new Mexican "race" for a new glorious future. Unfortunately, creating a seemingly neutral mixed-race "middle" identity erased Black and Indigenous people's presence and contributions. It is also used as a superiority stance, where Black and Indigenous people are perceived as less than because they don't have European blood. Not to mention, it negates the entire legacy of violent rape and genocide that created mestizos in the first place.

The first step in addressing our own biases is actually recognizing that Latinx communities have a culturally specific problem with racism, particularly anti-Blackness and anti-Indigeneity, based on our colonial history. The truth is we still live in a world where the color of your skin, the phenotype of your facial features, your hair type/texture, and even your class determines how you move in the world, how you will be treated, and what opportunities are available to you. From childhood, we've encountered terms like "pelo malo" to negatively describe afro-textured hair, or the derogatory term "Naco," which refers to an Indigenous servant, describing them as ill-mannered and low class. We still watch La India María, and to this day, Memín Pinguín is used as an insult or as a term of endearment (go figure) for people of darker complexion. Let's not forget many Latinos' casual use of the N-word. The most common defense is, "Well, it's a part of our culture," or, "We don't mean it like that." To which I say, really?

The irony is that most of the people who use those terms and excuses are usually a part of those communities themselves. But white Latinx are also guilty of claiming BIPOC identity when it serves them and dropping it when it doesn't. Leaning into Latinidad as a marginalized identity is the most popular tactic used by Latinxs when they are called out for racist behavior. It's great for deflecting responsibility, but it's definitely not conducive to actually addressing cultural racial bias. Let's not forget Miya Ponsetto, the white Latina who wrongly accused 14-year-old Keyon Harrold Jr. of stealing her phone in an NYC hotel in a video that went viral. Her entire defense in a Gayle King interview was, "I'm Puerto Rican. I'm, like, a woman of color."

On the surface, it seems that Cabello has done the things celebrities do when they "mess up." In her particular case, she claims to be taking weekly "racial healing" sessions, has reportedly made donations, and she put out a carefully worded apology. And yet here we are again. In a recent Bustle feature, Cabello's Latina identity is celebrated front and center without addressing another racist relapse and the very real concerns fans have had about her portraying Cinderella. When it comes to racism, the people who have done the harming tend to focus on healing themselves rather than restorative justice or atonement.

So, what can we do? We tend to focus on the national level, giving to organizations that seek to end large-scale societal problems like mass incarceration, homelessness, or police brutality, which is great. These antiracist flow charts give a lot of great solutions for individual growth like speaking out; holding elected officials accountable; analyzing our own beliefs; educating our peers; and promoting, supporting, and advocating for antiracist leaders, just to name a few.

We can also take it a step further and look into our lineages for who our ancestors harmed. We all carry injustices in our blood, the same way physical and biological traits have been passed down to us. But it is now our responsibility to not only heal ourselves but atone for past wrongdoings so others can also find their healing and be freed from these painful legacies.

Getting involved in the communities that have been harmed would be another great way to give back and make amends. For example, if you know your ancestors were missionaries or former slave owners, it might be a good idea to seek out the communities and families they impacted and see what needs to be done. Asking for forgiveness and making amends through service and some sort of financial restitution would for sure help.

I would also love to see Cabello amplify and promote up-and-coming artists that work toward antiracism on her platform. I would love to see her spending time talking about her experiences with "racial healing" and encouraging others to do the same. Considering her Mexican heritage, it would be cool to see her helping out Indigenous and Afro-Mexican communities that have been disproportionately impacted by Mexican President Andrés Manuel López Obrador's budget cuts. For one example, La Casa De La Mujer Indígena y AfroMexicana desperately needs funding. There are plenty of options!

I think that if Cabello wants to move past her mistakes, she should be focused on ending racism in the Latinx community through service and education, as we all should. It has to start in our homes with our families by talking about it openly instead of hiding it. It's going to be a long uphill battle because it's not like we can undo over 400 years of colonized thinking in one or even two generations, but we have to start somewhere.